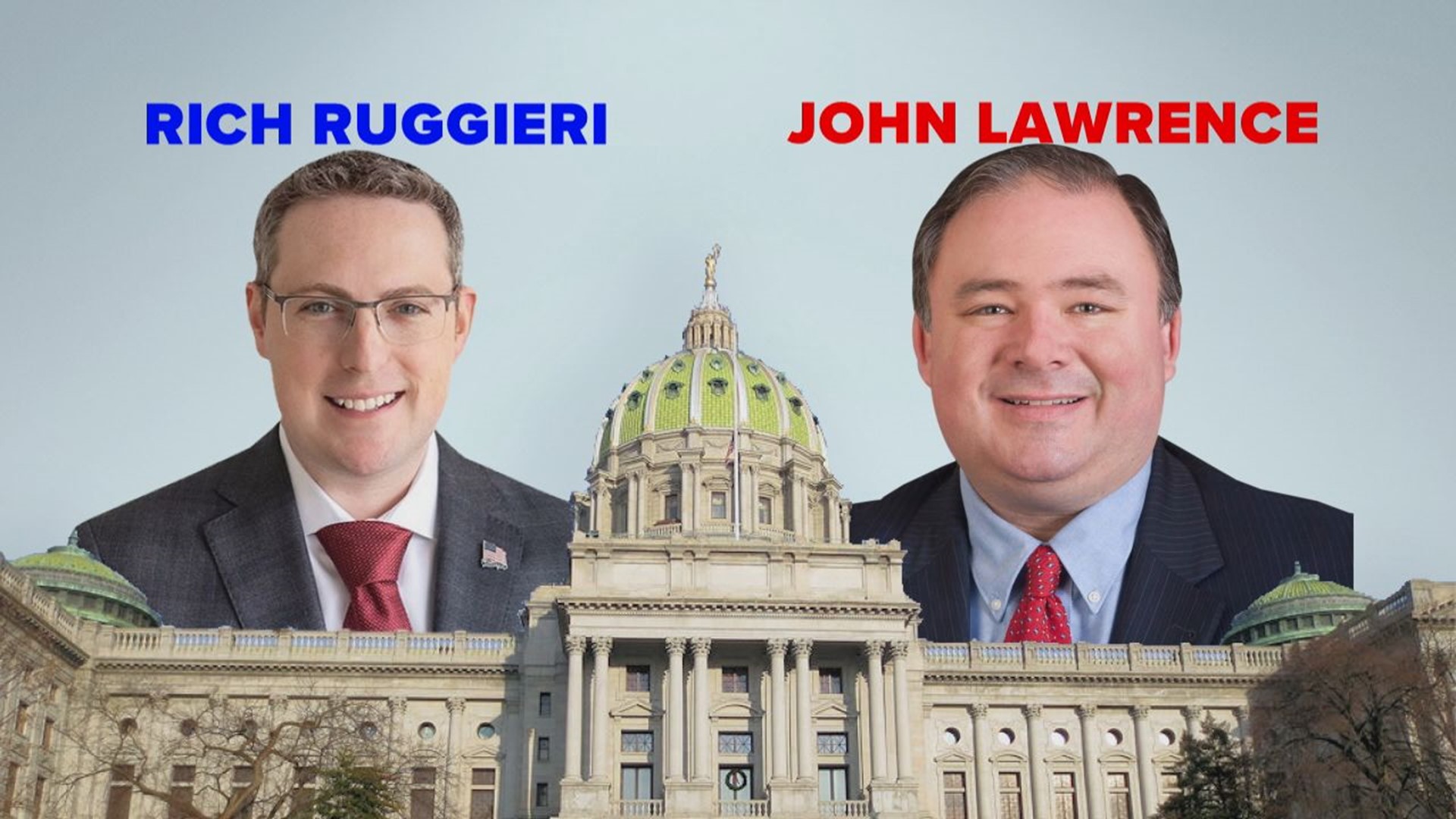 Democracy 2020 takes a look at the state house race for the 13th District.

This seat is mostly in Chester county, but does cover Christiana Borough and Sadsbury Township in Lancaster County.

Republican John Lawrence is seeking a 6th term in office against Democrat Rich Ruggieri. Lawrence is a lifelong resident of southern Chester County. He was elected in 2010. Lawrence's state website touts his work with the agriculture industry as a top priority, along with wanting to increase funding for public schools.

Lawrence was the main sponsor of a bill Governor Wolf signed to help domestic violence victims.

Rich Ruggieri is the vice president of a software company. He is an Air Force veteran and spent six years in the Pennsylvania National Guard.

Rich says one of his top goals is to end gerrymandering in Pennsylvania.

He tells FOX43 he would prioritize K-12 and higher education funding. Ruggieri would push for nuclear power and promote green energy as a way to jump the economy.

FOX43 sent a questionnaire to both Rep. Lawrence and Mr. Ruggieri. Only Ruggieri responded.

RICH RUGGIERI: I served my country in the United States Air Force for 10 years, and in 2020 I felt called to serve again, this time my community and my state. I believe that our state legislature is not serving the needs of the people of Pennsylvania, including my own District, and new leadership is needed.

RUGGIERI: As the father of two young boys, education reform is a passion of mine. I believe Pennsylvania should have the best schools and best teachers for all of our communities. Education is the cornerstone of a thriving economy, strong democracy, and prosperous society.

3. Name three goals you wish to accomplish in the next term if electeD?

RUGGIERI: Continuing to live through the COVID-19 pandemic and then recovering in the aftermath will the biggest challenge Pennsylvania has ever faced and will require all levels of government (local, state, and federal) as well as the private sector to work together and enact innovative solutions to our challenges.

RUGGIERI: Ensuring the safety of our families, neighbors, and communities is the top priority. Only if we stop the spread of the virus and have robust testing and track/trace programs can we hope to safely reopen our economy to it fullest.

RUGGIERI: Amidst a great amount of uncertainty and with little and even detrimental federal leadership, I believe Pennsylvania has done a good job of responding to the pandemic. Obviously no response was going to be perfect, but compared to many other states, our response saved lives and allowed many businesses to reopen in a timely fashion.

RUGGIERI: I believe we need to promote green and renewable energy to unlock the potential economic benefits of such technologies in PA. This includes investment in nuclear power and carbon capture for current coal plants.

8. Social unrest has played out in front of us as citizens protest the killings of George Floyd, Breanna Taylor, and other Black men and women. What changes are needed to state laws as it relates to criminal justice reform?

RUGGIERI: The laws enacted by Gov. Wolf over the summer were a good start, but there is obviously still more to do. Among the many things, we should outlaw police chokeholds, eliminate effectuating an arrest as a justification for use of deadly force, and require an independent review process in the instance where police seriously injure or kill civilians. We should also look to ensure that a healthy number of police comes from the communities they are asked to preside over.

RUGGIERI: I helped a family member with their unemployment during the first part of the COVID-19 pandemic, and I can tell you first hand that the system was never built to handle anywhere near the volume it has seen. The system should be adequately funded, and it is not. In the end, I had to reach out to my family member’s Representative to get help navigating the system.

RUGGIERI: I feel that the integrity of our elections should be beyond politics and unfortunately that is not the case this election. Act 77 passed in 2019 which saw the introduction of vote by mail to Pennsylvania. It was passed with bipartisan support. Not even one year later, the current leadership in the General Assembly has attacked vote by mail, largely following the lead of President Trump in attempting to make people question the legitimacy of these votes when the Assembly should have been working with Gov. Wolf to improve Act 77 based upon the issues which came up during the primary this past June. I believe, barring political interference, our election is secure, and the outcome will be fair.