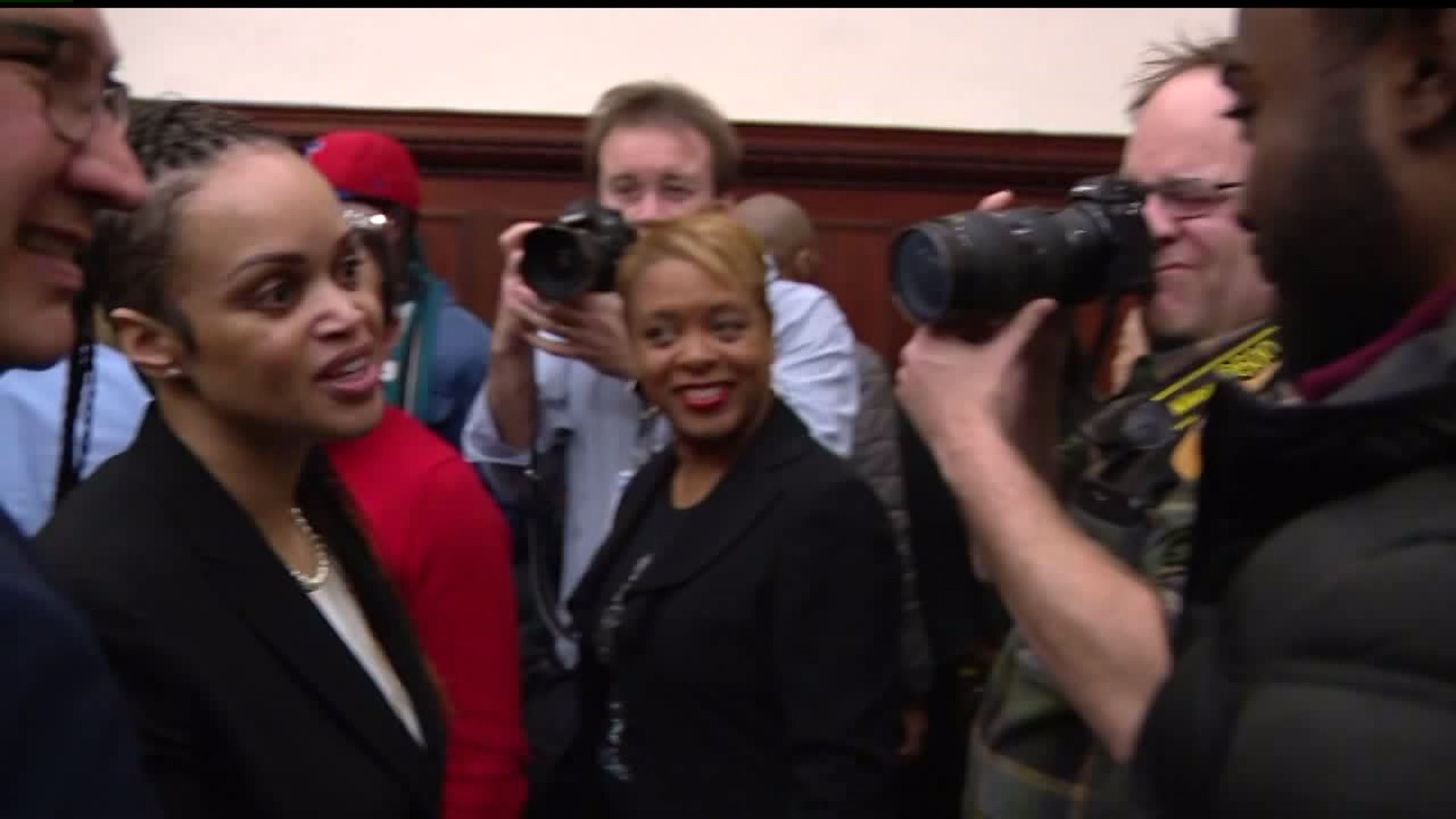 PHILADELPHIA, Pa. -- Philadelphia's new police commissioner is the first black woman in the city's history to lead its police department. Mayor Jim Kenney announced Danielle Outlaw will take over as the city's top cop. Outlaw formerly served as the Chief of Police of the Portland Police Department in Oregon.

"What makes you able to make this big jump and do this jump?" asked Fox29 reporter Jeff Cole during a press conference on Monday.

"Major city policing is major city policing, regardless of where you are in the country," Outlaw responded. "While I'm very qualified to make the jump, the issues are the same and I am very experienced in each of them."

Mayor Kenney says Outlaw was one of more than 30 people interviewed for the job, 18 of whom were from inside the Philadelphia Police Department. "It was time for an outside, fresh look, and she wowed us all in the interviews and we're happy with our choice."

Before coming to the city of brotherly love, Outlaw worked for the Oakland Police Department for nearly 20 years. After that, she became Chief of the Portland Police Bureau, where she has served for the last two years. She also became the first black woman to lead in that position.

Outlaw could be good for the department's reputation, but she will have a monumental task ahead of her. In addition to running a police force of 6,500 officers in Pennsylvania's most populated city, and the 6th-largest in the country, she'll have to pick up where multiple scandals earlier this year plagued the department and scarred its image.

In June, the Plain View Project, an online database, exposed multiple posts from hundreds of Philadelphia officers showing them making violent and racist comments on Facebook. Two months later, 15 police officers were suspended with intent to dismiss as a result of an investigation by the department's Internal Affairs.

In August, then-Police Commissioner Richard Ross, Jr. shocked the city of Philadelphia, when Mayor Kenney announced Ross had resigned. His departure from the police department came after a female police officer filed a lawsuit against the department claiming Ross ignored reports of sexual harassment. The deputy commissioner, Christine Coulter, stepped up as acting Commissioner in the wake of his resignation until now.

In October, a police inspector was charged with sexually assaulting three female officers he had mentored over the years. About 22% of the city's police officers are female.

Outlaw takes over a department that, like others, was criticized in the 1990s for ignoring sexual assault cases by misclassifying them. The Women’s Law Project, a national advocacy group based in Philadelphia, has worked with the department to review the handling of sex crime cases and improve practices and training since 2000.

“She is clearly someone on an upward trajectory in her career, from Oakland to Portland to Philadelphia. But it’s a huge undertaking,” said Carol Tracy, the group’s executive director. “I think anyone who comes in to Philadelphia from the outside has an upward battle in earning their respect,” Tracy said. “I hope she’ll call on people in the community like us for support.”

In addition to recent scandals, the Philadelphia Police Department has faced a series of controversies over its policing tactics over the years, particularly with how it interacts with the city's black population.

In May of 1985, Philadelphia police got into an armed standoff with members of MOVE, an African liberation group, in a neighborhood in West Philly. Police were serving warrants on four MOVE members for illegal possession of firearms, among other charges, at a house located at 6211 Osage Avenue. Negotiators couldn't manage to evict the MOVE members from the house peacefully, and the group managed to fortify the house and stockpile it with weapons.

At one point, a firefight started leading to MOVE and Police firing thousands of rounds at each other. But what happened next made international headlines.

That's when a Pennsylvania State Police helicopter dropped C-4 explosives on the roof of the house without warning. The idea was to blow the roof off so authorities could get inside, but the plan backfired. The detonation sparked a massive fire that got out of control and destroyed 61 homes.

Only one woman, Ramona Africa, survived, and she was arrested, charged, and convicted on conspiracy and riot charges.  Africa was later sentenced to seven years in prison. No law enforcement or city officials were ever charged for the bombing. The incident has left a lasting impression on race relations in the city to this day.

As for Outlaw, the 43-year-old police chief has faced controversy of her own. In September, Outlaw and Portland Mayor Ted Wheeler announced the former crowd control liaison of Portland Police was doing his job when he exchanged friendly texts with Joey Gibson, the leader of the far-right group Patriot Prayer.

Patriot Prayer members clashed with members of the far-left group, Antifa, and other counter-protesters during demonstrations in Portland between 2017 and 2018. Those demonstrations often turned very violent.

When the messages surfaced, members of the Portland community claimed the texts were evidence the police department had preference for Patriot Prayer members when officers targeted counter-protesters during the violent clashes. Some texts showed Niiya telling Gibson about the movements of counterprotesters, and in some cases warning Gibson about an arrest warrant for one of his devoted followers.

Dozens of activists, rallied by The Pacific Northwest Antifascist Workers Collective, demonstrated outside Portland City Hall to demand the city and Police Bureau "be held accountable for supporting, protecting and collaborating with violent ultra nationalists and fascists who perpetrate violence in our city."

According to the Oregon's online newspaper, OregonLive, An auditing division that handles investigations of high-ranking police administrators looked Lt. Jeff Niiya. Portland's Independent Police Review investigated allegations Niiya engaged in unprofessional behavior with Gibson, among other things, when he was gathering protest information. Outlaw concluded the allegations against Niiya were "unfounded."

However, Outlaw did announce changes to the program that handled those protests, after the city's investigation also found the program's officers who served as liaisons hadn't received formal training and had no written standards for how to do their job. Some of those changes included new training, uniforms and operating procedures. Critics and police experts alike say Outlaw's job was immensely challenging, as she had to make hard decisions when Portland couldn't recruit and retain police officers.

These factors, according to Mayor Kenney, are some of the reasons why he chose Outlaw to be the city's police commissioner. "I am convinced [Outlaw] has the conviction, courage, and compassion needed to bring long-overdue reform to the Department," he said. "With our support... Commissioner Outlaw will implement reforms with urgency, so that racial, ethnic, and gender discrimination are not tolerated."

Outlaw has presented on topics like race and policing, women in law enforcement, de-escalation and investigating use of force, building community relations and police accountability.

Outlaw’s TEDx Talk, Humanity in Authority, looked into how police and humanity can and should co-exist.

In addition to the racial and social factors she could help ease in the community, Outlaw is also pledging to bring down the city's violent crime. But that could be easier said than done.

In 2019, Philadelphia recorded 355 homicides, barely topping the number from 2018 of 353. That's the highest homicide rate in Philadelphia since 2007, when the city lead the country for homicides with 391 killings. That's a high number for a city of more than 1.56 million people. By comparison, Portland recorded 32 homicide offenses between January and October of this year, according to data from the Police Bureau's Strategic Services Division. That's for a city with an estimated population of more than 653,000 people.

Outlaw will have 6 1/2 times the police force to work with, compared to Portland's 1,000 police officers. She asked for the public's support to battle gun violence and murder, but said it's too early to say how she'll help bring violent crime down.

Cole asked her, "What needs swift action, you must know that?" to which Outlaw replied, "I don't have an answer today. You'll take that and ask me in 30 days 'did you do it?' Give me a minute."

Philadelphia District Attorney Larry Krasner, on the other hand, expressed faith in outlaw, saying in a statement: "As an outsider to Philadelphia, you are well positioned to act during a time of needed reform on the ideals you have expressed. We are hopeful that your deeds will match your words and you will push for justice, because we all know that justice makes us safer."

Outlaw will officially take over as Philadelphia Police Commissioner on February 10th.