Capitol Police say they're investigating 35 officers' actions during the Capitol riot. The union calls it a 'witch hunt'

Six of the officers are suspended without pay, according to a USCP spokesman. 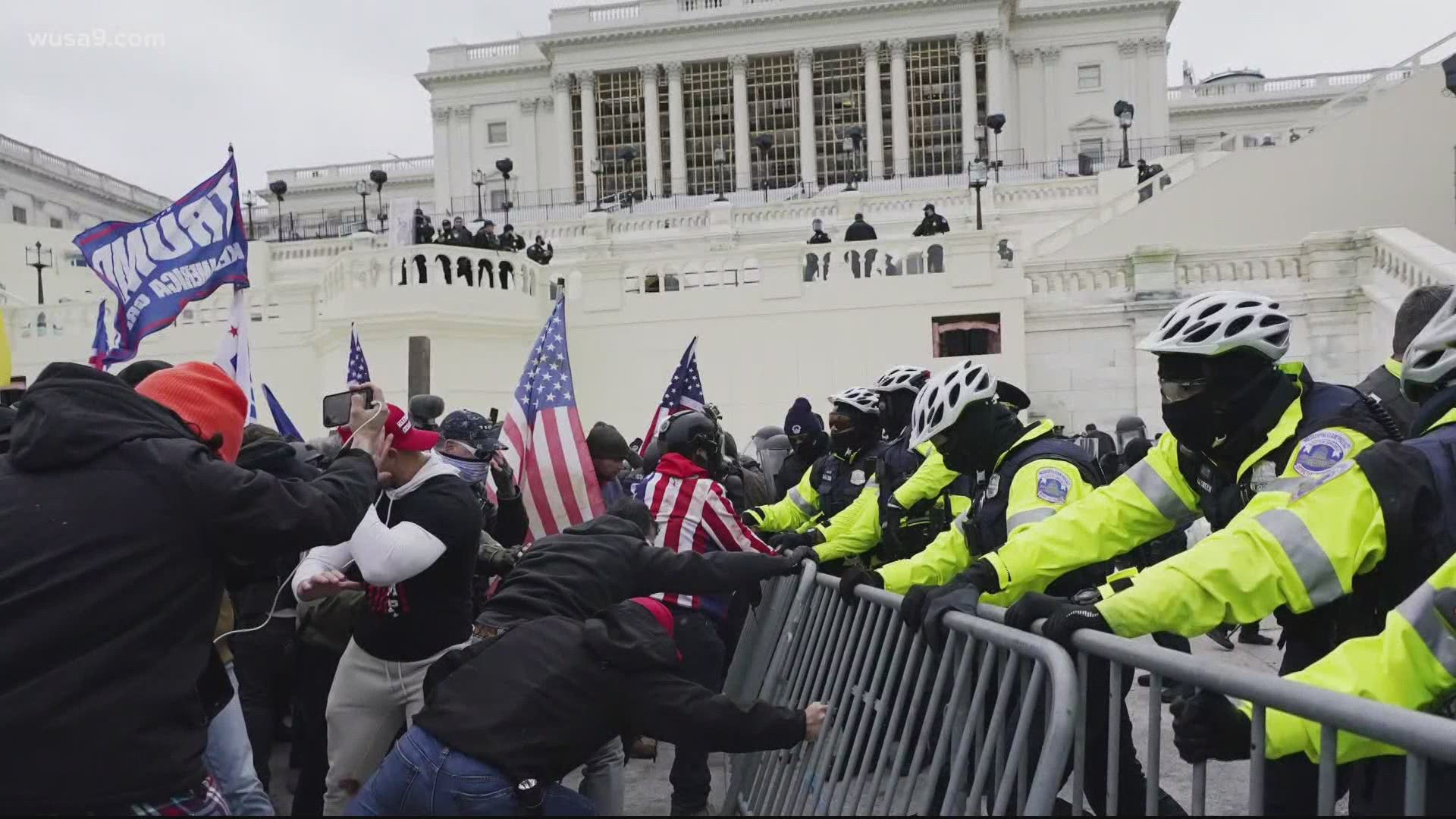 WASHINGTON — Thirty-five U.S. Capitol Police officers are now under investigation for their actions during the January 6 insurrection at the Capitol, the department confirmed Friday

Those 35 officers include six who are now suspended without pay pending a review of their actions by the Office of Professional Responsibility, according to a statement Capitol Police spokesman John Stolnis provided to WUSA9.

“The investigation into the January 6 attack remains under investigation," Stolnis said in a written statement. "Our Office of Professional Responsibility is investigating the actions of 35 police officers from that day. We currently have suspended six of those officers with pay. Acting Chief Yogananda Pittman has directed that any member of her department whose behavior is not in keeping with the Department’s Rules of Conduct will face appropriate discipline.”

More than 100 officers from both USCP and DC Police were injured defending the Capitol on January 6, including one officer, Brian Sicknick, who died of injuries sustained during the riot. Two other officers have taken their own lives since the events of that day.

Members of Congress have hailed the Capitol Police as heroes, and voted to award the Congressional Gold Medal to Officer Eugene Goodman.

However, questions have continued to swirl around the actions of some police captured on video during the riot appearing to move barricades, allow members of the mob inside the building and even take selfies with individuals who had violently breached the Capitol.

George Washington University criminal justice professor Dr. Scott White told WUSA9 the investigations aren't likely to be for officers' failure to stop the crowds – but rather their actions afterward.

"They cannot stop 10,000 people," White said. "The tipping point is going to be those officers that either walked off the line or became complacent with the actions of the insurgents. At that point, there are absolute grounds for termination of employment.”

Internally, the department has been roiled by division since the Capitol riot. Former Chief Steven Sund resigned within days of the Capitol breach, and last week, more than 90% of Capitol Police officers’ union members who participated in a “no confidence” vote said they had no faith in Acting Chief Yogananda Pittman and other members of leadership.

Pittman testified in a closed-door meeting before the House Appropriations Committee that the department had intelligence that “there was a strong potential for violence and that Congress was the target” – but failed to properly share that with rank-and-file members of the department.

Union chairman Gus Papathanasiou has called failures by leadership to share intelligence about militia involvement and the possibility of violence on January 6 “unconscionable,” and has laid the deaths of officers that day at their feet.

On Friday, Papathanasiou blasted the announcement that dozens of officers were under investigation, calling it an "attempt by USCP's upper management to divert the attention away from their significant leadership failures."

"Our Officers were uninformed, unprotected and unprepared as a result of the department's top leaders failing the officers and the congressional community on Jan. 6," Papathanasiou told WUSA9. "Our officers along with MPD were outnumbered ‎and fought for their lives in order to protect themselves and Congress. This is just a witch hunt by the department's top leaders and a continuation of the systemic failures that continue at the top. I think it's sickening that the Department's leaders are even investigating over 35 officers because of USCP's top management's immediate failures as they try to point the fingers at officers who were applauded by Congress this past week. Why aren't any of the chiefs being investigated or suspended?"