Three sisters make up the pop-rock trio HAIM. They're nominated for two honors at the Grammys, including album of the year. 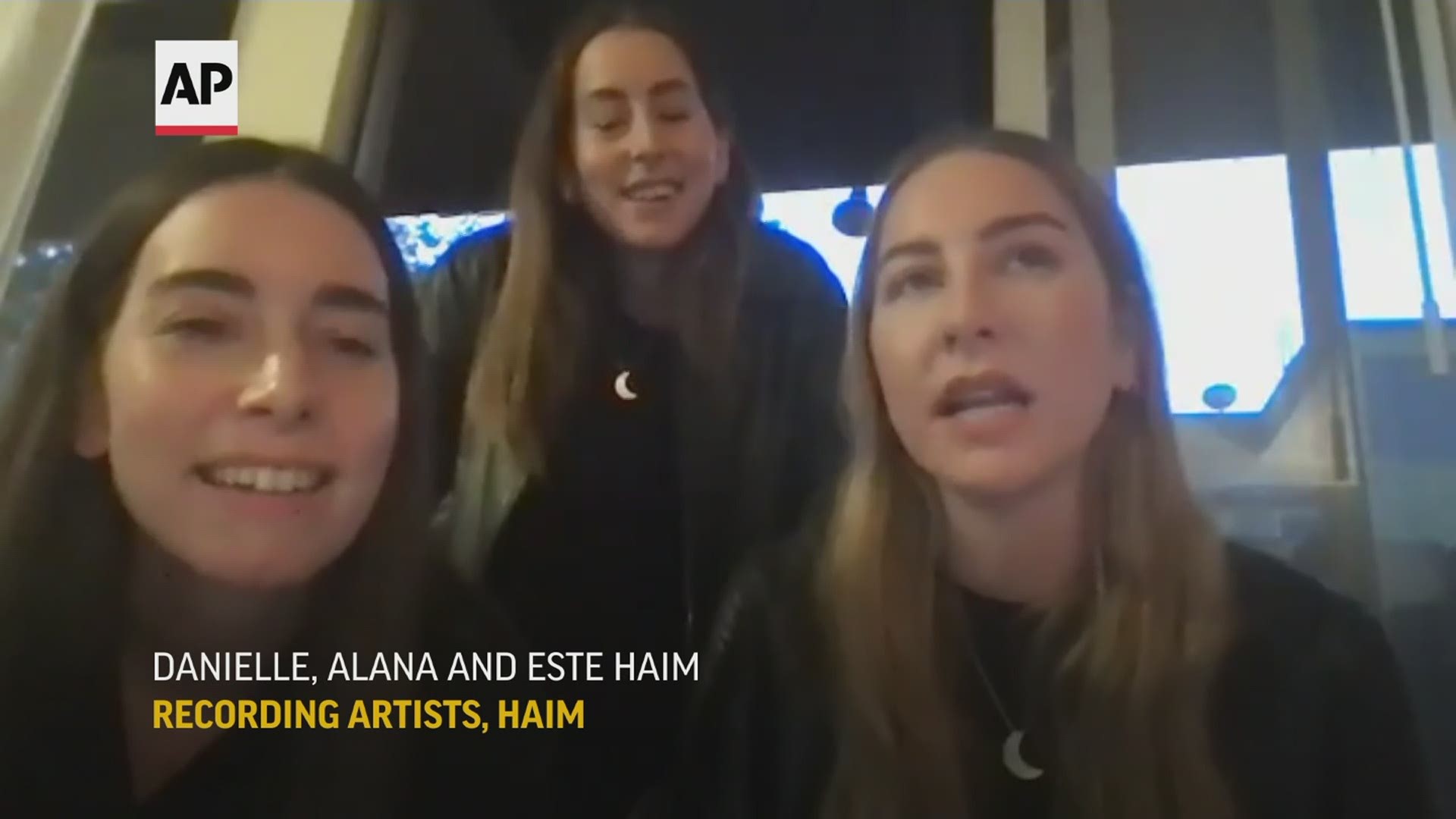 Her 34th birthday fell on Los Angeles’ first day of quarantine and she was alone in her apartment eating a sugar free cupcake.

This year, she’ll be finding out if she and her sisters, who make up the pop-rock trio HAIM, will be taking home their first Grammy Award.

“Whether we win or lose, there will be a lot of tequila happening,” said 29-year-old Alana Haim, the youngest of the three.

HAIM is making history at Sunday's show — the group is the first all-female rock band nominated for the Grammy's top prize, album of the year, pitting them against heavyweights like Taylor Swift, Coldplay, Post Malone, Dua Lipa and more. They also join an all-female ensemble with their nomination for best rock performance, where nominees include Fiona Apple, Brittany Howard, Grace Potter, Phoebe Bridgers and Big Thief, the alternative band led by Adrianne Lenker.

“(It’s) surreal and I also feel like it’s a long time coming,” Este Haim said of the female representation at the Grammys.

RELATED: When and how to watch the 2021 Grammy Awards

HAIM’s Grammy nominations and upcoming performance at the awards show cap out an album experience they weren’t expecting.

“I mean, my body is ready to go on tour and to play live and to play these songs,” Alana Haim said.

“We had a whole tour booked,” added Danielle Haim, 32. “It was bittersweet to bring the record out into the world when we couldn’t actually go out and tour it.”

Unable to engage fans from the stage, they've made do by connecting online.

The band’s Instagram page includes posts like a dance in Hanukkiah hats, a satirical holiday music video featuring Grammy-winning musician Thundercat (whom Este Haim, as a fellow bassist, has a “not so secret” crush on) and even one post that scared their mother.

“The only time that it gets stressful is when our mom calls us and she’s like, ‘What were you doing on the internet today? I saw your underwear. Did you know that?’” said Este Haim.

While the three singers are mostly aiming to have fun on social media, they also try to keep it real — like when Este Haim, who has Type 1 diabetes, shows her insulin pump in photoshoots or in tweets.

“I wear my pump like it’s a part of me,” said Este Haim. “I think that it’s important to raise awareness and normalize apparatuses that people with chronic illness have to wear.”

Social media may have kept them partially entertained during the pandemic, but they were also busy at work creating music. They admit that the ease of collaboration improved.

“We’ve jumped on a lot of people’s songs during our career, and it was always in person because there wasn’t a pandemic,” said Alana Haim. “It’s actually kind of exciting because I feel like we all, as musicians, kind of had to figure out all of our home studios pretty quickly.”

RELATED: Grammys 2021 ceremony postponed because of worries over COVID-19

This allowed for faster collaborations. After working with Thundercat on “3 AM,” Este Haim says they texted Swift, whom the group had opened for in 2015, and she responded immediately saying she’d record vocals for “Gasoline” from home the next day.

“She just added such an amazing new facet to the song and it really is like a remix,” said Este Haim. “She really brought a whole new layer of imagery to the song as well.”

HAIM also appears on Swift's “no body, no crime" — from Swift's second surprise 2020 album “evermore." The murder mystery track marks HAIM's first entry on the Billboard Hot 100 chart, peaking at No. 34, and the song even reached No. 2 on the country music chart.

HAIM could see the popularity of remote recording staying after the pandemic.

“It really did make it easy to collaborate with people that maybe usually were on tour,” said Alana Haim. “Maybe in the future, this is just what’s going to come out of it — more collaborations because we’ve figured out how to create.”

Credit: Chris Pizzello/Invision/AP
Sisters, from left, Este, Alana and Danielle Haim of the band HAIM pose together for a portrait in Los Angeles on Feb. 22, 2021. (AP Photo/Chris Pizzello)