While his speeches have stopped short of blatant calls for President Trump's reelection, the venues Pompeo has chosen have raised eyebrows. 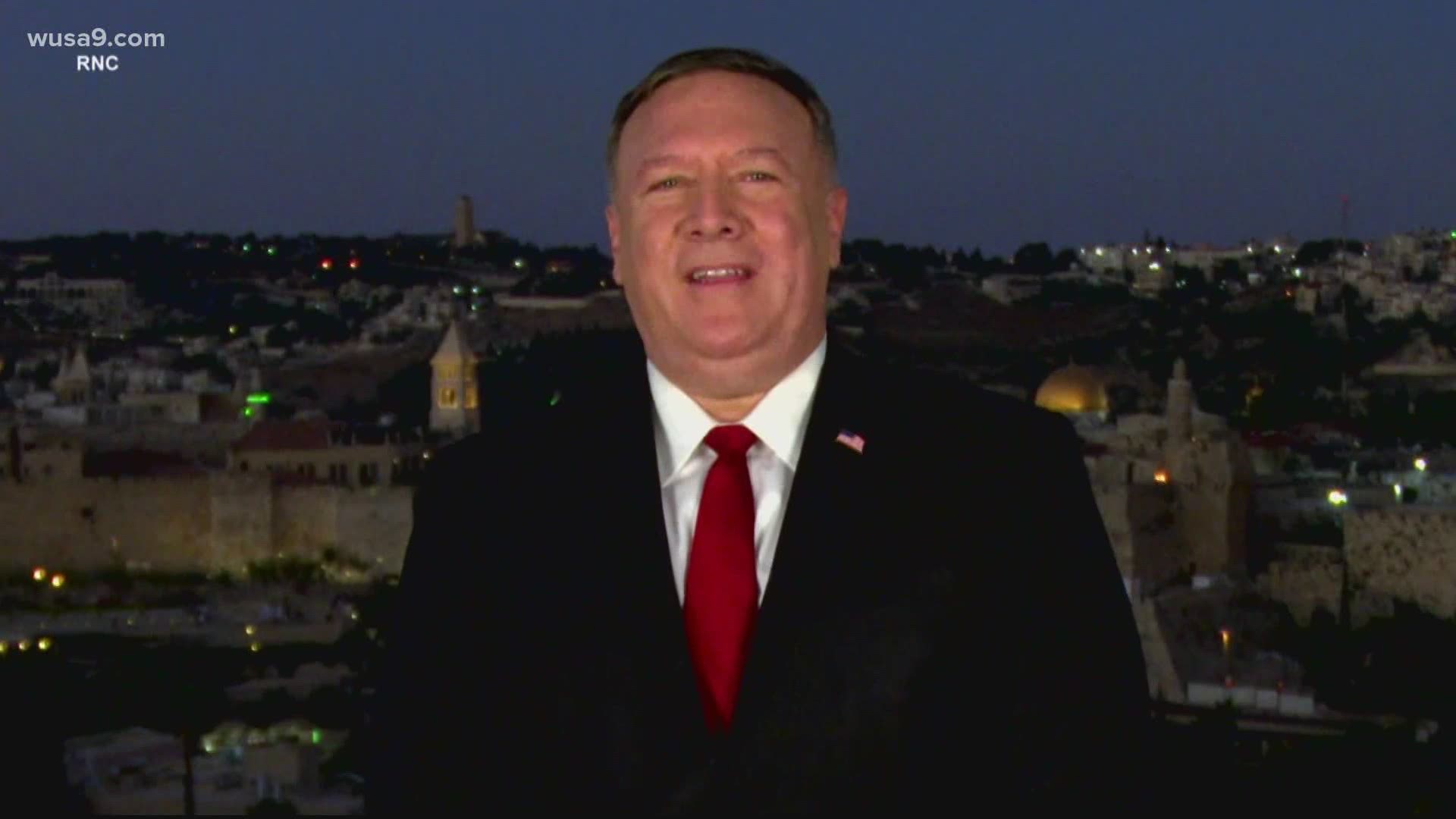 WASHINGTON D.C., DC — Undaunted by criticism, Secretary of State Mike Pompeo is forging ahead with a series of events that have overtly political overtones ahead of the November presidential election.

Casting aside a long tradition of the nation’s top diplomat shunning partisan politics, Pompeo gave a speech on Wednesday in the swing state of Wisconsin, marking his participation in the fourth event this month alone that goes well beyond what previous secretaries of state have done in support of the presidents they have served.

From the Republican National Convention, which he addressed by recorded video from Israel, to an evangelical megachurch in Texas over the weekend and the Value Voters Summit in Washington just on Tuesday, Pompeo has not been shy in taking his message to audiences considered essential to President Donald Trump's reelection. And, more are scheduled.

RELATED: US says all UN sanctions on Iran restored, but rest of world yawns

RELATED: Outgoing US ambassador to China to help Republican campaigns

While Pompeo's speeches have stopped short of blatant calls to vote for Trump, the venues he has chosen have raised eyebrows and sparked allegations from Democrats of possible violations of federal law. Pompeo and his aides have denied any wrongdoing and defended his appearances as part of explaining foreign policy and the State Department's role to the American people.

Yet, they fit a pattern he has established since becoming secretary of state nearly three years ago. He has bristled at restrictions his predecessors have observed in obeyance of the Hatch Act, which forbids political activity by federal officials in their positions.

And, Pompeo is not alone. He’s just one of many frequent fliers to battleground states in Trump’s Cabinet as Nov. 3 draws near.

Cabinet-level travel to Pennsylvania and other states vital to Trump in the Electoral College have intensified in recent weeks.

But these Cabinet members have portfolios dealing primarily with domestic issues, so their travel to states is less likely to raise eyebrows. But secretaries of state are associated with traveling around the globe — and steering clear of domestic politics.

Madeleine Albright, a longtime Democratic activist, famously spoke of having her “political instincts surgically removed" when she became secretary of state under President Bill Clinton and worked with top Republicans in Congress like North Carolina Sen. Jesse Helms on foreign policy matters. Colin Powell shied away from political events while he held the office in Republican President George W. Bush's administration as did his successor Condoleezza Rice.

While Hillary Clinton and John Kerry each defended the Obama administration's policies with special emphasis on issues they felt strongly about, both pointedly distanced themselves from campaign appearances.

As Trump’s secretary of state Pompeo has traveled extensively in the United States to speak to conservative audiences. Beyond any support Pompeo may be giving to Trump, the travels have added to speculation that he has political aspirations of his own, including a possible presidential run in 2024. Pompeo has deflected questions about his personal ambitions.

Pompeo's home state of Kansas has been a frequent destination, but he has also spoken in Tennessee, Florida and Kentucky at events that might not otherwise be considered prime locations for foreign policy discourse.

After Pompeo's China-focused speech at the Wisconsin state capitol in Madison on Wednesday, Wisconsin Democratic state Sen. Chris Larson decried the appearance, calling it a “campaign speech disguised as a foreign policy address.”

But Pompeo's appearance at the Republican National Convention last month — it attracted a substantial backlash from Democrats — appears to have set the stage for an all-out, election-year push for Trump as Pompeo touts the president's full-throated support for Israel, promotion of international religious freedom and increasingly tough stance on China.

In addition to the Wisconsin state Senate on Wednesday, Pompeo spoke to white evangelicals, a key demographic for Trump at the Prestonwood Baptist Church in Plano, Texas, at services last Sunday.

“As the secretary of state I’m not allowed to do politics,” he told the congregation, “but I can do duty, and it is everyone’s duty to be counted, to stand up and express your preference, the things that you want, and to go to the polling place and exercise that freedom that we have been given and that our officers and security teams will ensure that we have the opportunity to go vote.”

“Go exercise that right and make sure every one of your friends does the same, and then the Lord will pass upon it and we will come out of this election a stronger, better nation,” he said. “I am confident of that.”