The French Prime Minister said the lives of the two wounded workers are not in danger. He offered the government’s solidarity with their families and coworkers. 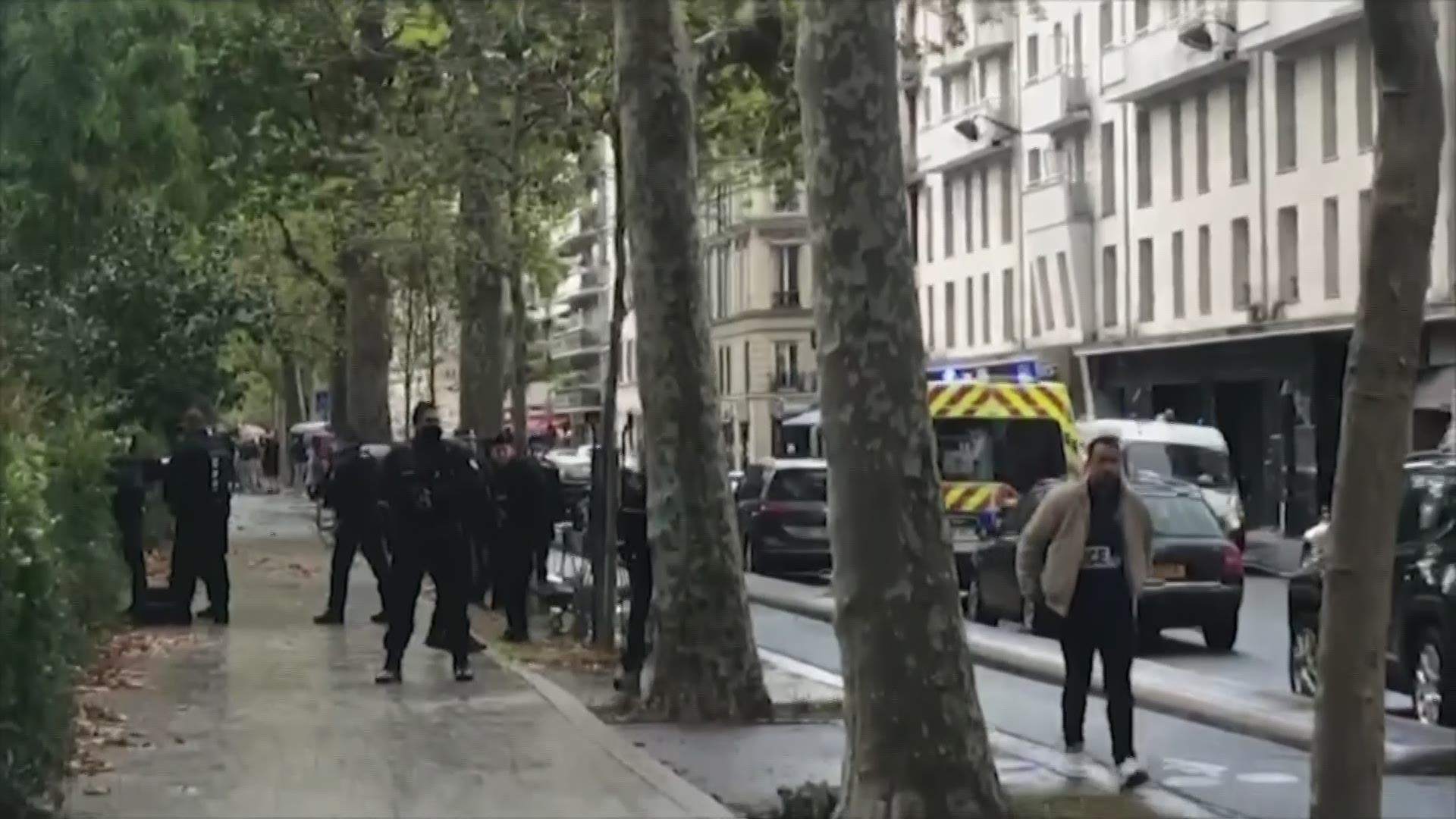 PARIS, France — French terrorism authorities are investigating a double-stabbing outside the former Paris offices of a satirical newspaper where a dozen people were killed in 2015, and two suspects have been arrested in Friday's violence, authorities said.

France's counterterrorism prosecutor said authorities suspect a terrorist motive because of the place and timing of the stabbings: in front of the building where Charlie Hebdo was based until the Islamic extremist attack on its cartoonists and at a time when suspects in the 2015 attack are on trial across town.

Prosecutor Jean-Francois Ricard said that the chief suspect in Friday's stabbings was arrested, along with another person. Ricard said the assailant did not know the people who were stabbed, two workers in a documentary production company who had stepped outside for a smoke break.

The suspects' identities have not been released, and it is unclear exactly what prompted the attack. An investigation was opened into “attempted murder in relation with a terrorist enterprise,” according to an official at the terrorism prosecutor’s office.

French Prime Minister Jean Castex said the lives of the two wounded workers are not in danger. He offered the government’s solidarity with their families and colleagues.

Associated Press reporters at the scene saw police flood the neighborhood in eastern Paris near the Richard Lenoir subway station, which remained cordoned off hours later. Children were sequestered in nine schools while police scoured the area, but were later released, according to the Paris school district.

“All the team at Charlie offers support and solidarity to its former neighbors and colleagues at PLTVfilms and to the people hit by this odious attack,” Charlie Hebdo tweeted.

Credit: AP
French police officers and rescue workers gather after four people have been wounded in a knife attack near the former offices of satirical newspaper Charlie Hebdo, Friday Sept. 25, 2020 in Paris. A police official said officers are "actively hunting" for the perpetrators and have cordoned off the area including the former Charlie Hebdo offices after a suspect package was noticed nearby. Islamic extremists attacked the offices in 2015, killing 12 people. (AP Photo/Thibault Camus)

The prime minister noted the “symbolic site" of the attack, “at the very moment where the trial into the atrocious acts against Charlie Hebdo is under way.” He promised the government's “unfailing attachment to freedom of the press, and its determination to fight terrorism.”

The two people confirmed injured worked for documentary film company Premieres Lignes, according to founder Paul Moreira. He told BFM television that the attacker fled into the subway, and the company’s staff members were evacuated.

Moreira said a man in the street “attacked two people who were in front of the building, didn’t enter the building, and who attacked them with an axe and who left.” He said the company had not received any threats.

Witness Kader Alfa told The AP at the scene: “I saw a guy that was in his 30s or 40s with an axe in his hand who was walking behind a victim covered in blood."

Police cordoned off the area, including the former Charlie Hebdo offices, after a suspect package was noticed nearby, but the package was found to be harmless and no explosives were found, according to a police official.

Police initially announced that four people were wounded in the attack, but a police official told The AP that there are in fact only two confirmed wounded. Police could not explain the discrepancy.