Officials: Many migrants from border camp staying in US

Haitians have been freed on a “very, very large scale” in recent days, according to one U.S. official who put the figure in the thousands. 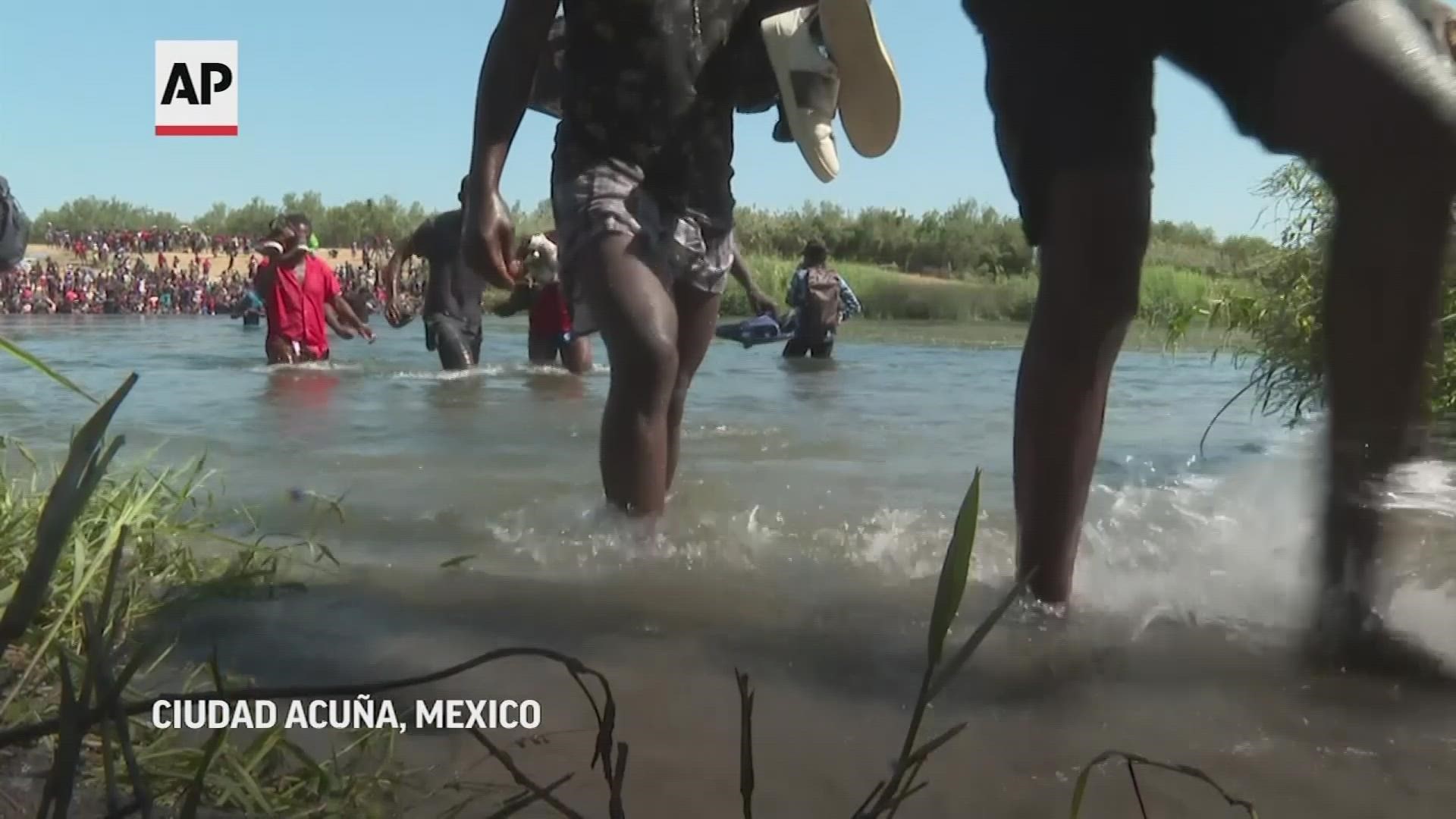 DEL RIO, Texas — Many Haitian migrants camped in a small Texas border town are being released in the United States, two U.S. officials said Tuesday, undercutting the Biden administration’s public statements that the thousands in the camp faced immediate expulsion.

Haitians have been freed on a “very, very large scale” in recent days, according to one U.S. official with direct knowledge of operations. The official, who was not authorized to discuss the matter and thus spoke on condition of anonymity, put the figure in the thousands.

Many have been released with notices to appear at an immigration office within 60 days, an outcome that requires less processing time from Border Patrol agents than ordering an appearance in immigration court and points to the speed at which authorities are moving, the official said.

The Homeland Security Department has been busing Haitians from Del Rio to El Paso, Laredo and Rio Grande Valley along the Texas border, and this week added flights to Tucson, Arizona, the official said. They are processed by the Border Patrol at those locations.

A second U.S. official, also with direct knowledge and speaking on the condition of anonymity, said large numbers of Haitians were being processed under immigration laws and not being placed on expulsion flights to Hait i that started Sunday. The official couldn’t be more specific about how many.

Credit: AP
Migrants, many from Haiti, are seen at an encampment along the Del Rio International Bridge near the Rio Grande, Tuesday, Sept. 21, 2021, in Del Rio, Texas.

The releases in the U.S. were occurring despite a massive effort to expel Haitians on flights to Haiti under pandemic-related authority that denies migrants an opportunity to seek asylum. A third U.S. official not authorized to discuss operations said there were seven daily flights to Haiti planned starting Wednesday.

Accounts of wide-scale releases - some observed at the Del Rio bus station by Associated Press journalists - are at odds with statements a day earlier by Homeland Security Secretary Alejandro Mayorkas, who traveled to Del Rio to promise swift action.

“If you come to the United States illegally, you will be returned, your journey will not succeed, and you will be endangering your life and your family’s life,” he said at a Monday news conference.

Credit: AP
Migrants, many from Haiti, are seen at an encampment along the Del Rio International Bridge near the Rio Grande, Tuesday, Sept. 21, 2021, in Del Rio, Texas.

Homeland Security, asked to comment on releases in the United States, said Wednesday that migrants who are not immediately expelled to Haiti may be detained or released with a notice to appear in immigration court or report to an immigration office, depending on available custody space. The department declined to say how many have been released.

“The Biden Administration has reiterated that our borders are not open, and people should not make the dangerous journey,” the department said in a statement. “Individuals and families are subject to border restrictions, including expulsion. Irregular migration poses a significant threat to the health and welfare of border communities and to the lives of migrants themselves, and should not be attempted.”

The releases come amid a quick effort to empty the camp under a bridge that, according to some estimates, held more than 14,000 people over the weekend in a town of 35,000 people. Texas Gov. Greg Abbott, during a visit Tuesday to Del Rio, said the county’s top official told him the most recent tally at the camp was about 8,600 migrants.

The criteria for deciding who is flown to Haiti and who is released in the U.S. was unclear, but two U.S. officials said single adults were the priority for expulsion flights.

Meanwhile, Mexico has begun busing and flying Haitian migrants away from the U.S. border, authorities said Tuesday, signaling a new level of support for the United States as the camp presented President Joe Biden with a humanitarian and increasingly political challenge.

The White House is facing sharp bipartisan condemnation. Republicans say Biden administration policies led Haitians to believe they would get asylum. Democrats are expressing outrage after images went viral this week of Border Patrol agents on horseback using aggressive tactics against the migrants.

Mexico has helped at key moments before. It intensified patrols to stop unaccompanied Central American children from reaching the Texas border in 2014, allowed tens of thousands of asylum-seekers to wait in Mexico for hearings in U.S. immigration courts in 2019 and, just last month, began deporting Central American migrants to Guatemala after the Biden administration flew them to southern Mexico.

Marcelo Ebrard, Mexico’s foreign relations secretary, said Tuesday he had spoken with his U.S. counterpart, Secretary of State Antony Blinken, about the Haitians’ situation. Ebrard said most of the Haitians already had refugee status in Chile or Brazil and weren’t seeking it in Mexico.

“What they are asking for is to be allowed to pass freely through Mexico to the United States,” Ebrard said.

Two Mexican federal officials, who requested anonymity because they were not authorized to speak publicly, confirmed Mexico’s actions.

One of the officials said three busloads of migrants left Acuña on Tuesday morning for Piedras Negras, about 55 miles (90 kilometers) down the border, where they boarded a flight to the southern city of Villahermosa in the state of Tabasco.

The other official said there was a flight Monday from the northern city of Monterrey to the southern city of Tapachula near the Guatemala border. Tapachula is home to the largest immigrant detention center in Latin America. The flight carried about 100 migrants who had been picked up around the bus station in Monterrey, a hub for various routes north to the U.S. border.

The second official said the plan was to move to Tapachula all Haitians who already solicited asylum in Mexico.

The Haitian migrants who are already in Mexico’s detention centers and have not requested asylum will be the first to be flown directly to Haiti once Mexico begins those flights, according to the official.

Credit: AP
A Haitian migrant wades across the Rio Grande from Del Rio, Texas, to return to Ciudad Acuña, Mexico, Tuesday, Sept. 21, 2021, to avoid deportation from the U.S. The U.S. is flying Haitians camped in a Texas border town back to their homeland and blocking others from crossing the border from Mexico. (AP Photo/Fernando Llano)

Around Ciudad Acuña, Mexican authorities were stepping up efforts to move migrants away from the border. There were detentions overnight by immigration agents and raids on hotels known to house migrants.

“All of a sudden they knocked on the door and (yelled) ‘immigration,’ ‘police,’ as if they were looking for drug traffickers,” said Freddy Registre, a 37-year-old Venezuelan staying at one hotel with his Haitian wife, Vedette Dollard. The couple was surprised at midnight.

Authorities took four people plus others who were outside the hotel, he said. “They took our telephones to investigate and took us to the immigration offices, took our photos,” Registre said. They were held overnight but finally were given their phones back and released. Authorities gave them two options: leave Mexico or return to Tapachula.

On Tuesday afternoon, they decided to leave town. They bought tickets for a bus ride to the Gulf coast state of Veracruz, planning to continue to Tapachula where they had already applied for asylum.

Others left without being told. Small groups arrived at Ciudad Acuña’s bus station to buy tickets to Veracruz, Monterrey and Mexico City. The same bus lines prohibited from selling them tickets for rides north through Mexico, sold them tickets to head south without issue.

In Haiti, dozens of migrants upset about being deported from the U.S. tried to rush back into a plane that landed Tuesday afternoon in Port-au-Prince as they yelled at authorities. A security guard closed the plane door in time as some deportees began throwing rocks and shoes at the plane. Several of them lost their belongings in the scuffle as police arrived. The group was disembarking from one of three flights scheduled for the day.

Credit: AP
Texas Department of Safety vehicles line up along the bank of the Rio Grande near an encampment of migrants, many from Haiti, near the Del Rio International Bridge, Tuesday, Sept. 21, 2021, in Del Rio, Texas.