The racing league says its presence 'runs contrary to our commitment to providing a welcoming and inclusive environment.' 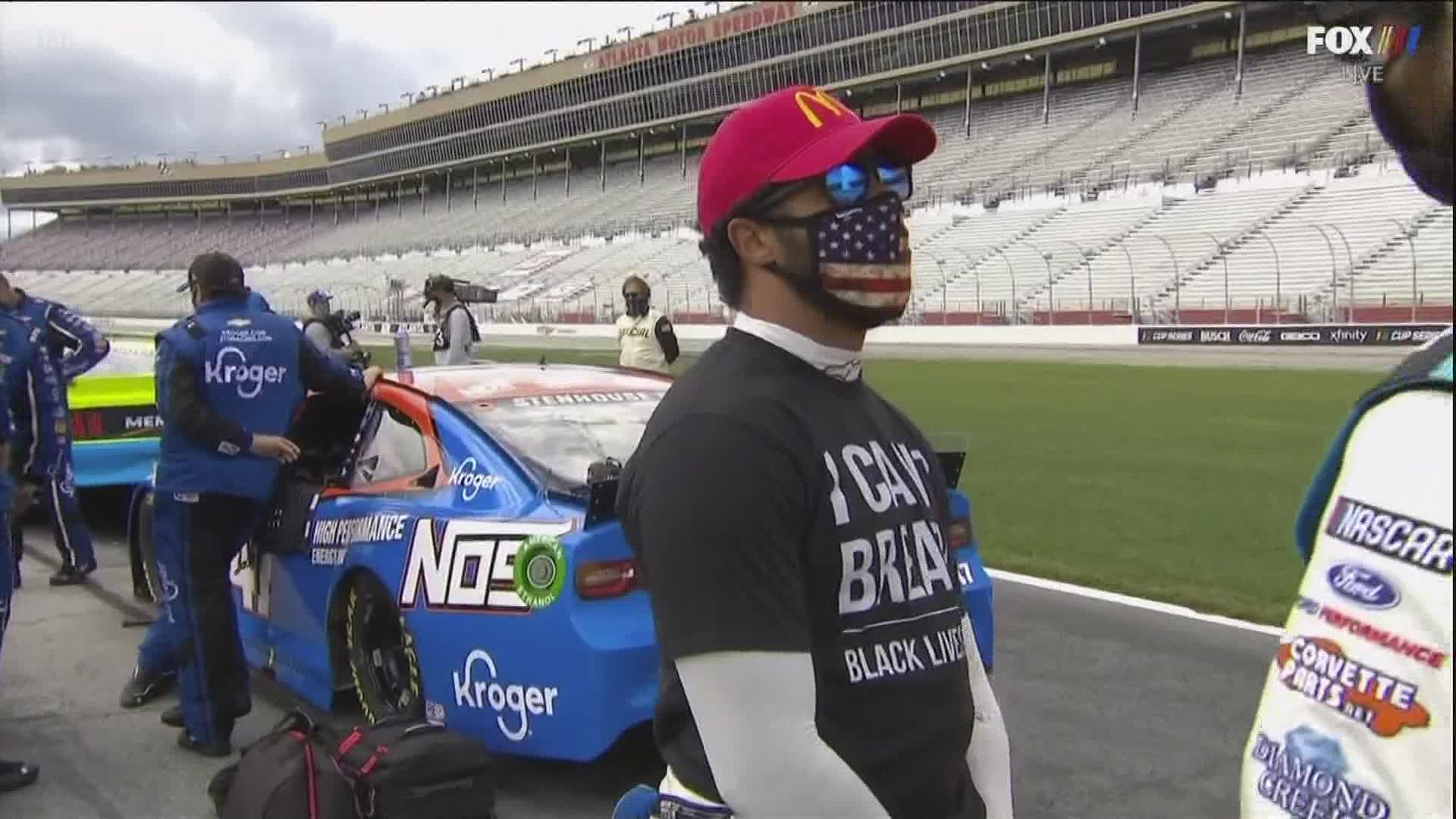 WASHINGTON — NASCAR has banned the Confederate flag from races, tracks and all other of its events and properties.

The racing league says in a statement Wednesday that displaying it will be prohibited, because "the presence of the confederate flag at NASCAR events runs contrary to our commitment to providing a welcoming and inclusive environment for all fans."

The flag ban comes after Bubba Wallace, the only black driver in the Cup Series, NASCAR's top competition, said he's working to rid racetracks completely of it.

Wallace has been outspoken since the death of George Floyd sparked protests and a global racial justice dialogue. He wore an "I Can't Breathe" t-shirt before last Sunday's race in Atlanta.

Credit: AP
FILE - In this Sept. 5, 2015, file photo, a Confederate flag flies in the infield before a NASCAR Xfinity auto race at Darlington Raceway in Darlington, S.C. Bubba Wallace, the only African-American driver in the top tier of NASCAR, calls for a ban on the Confederate flag in the sport that is deeply rooted in the South. (AP Photo/Terry Renna, File)

NASCAR's announcement on Wednesday formally distances itself from what for many is a symbol of slavery and racism that had been a familiar sight at stock car events for more than 70 years.

The move comes amid social unrest around the globe following the death of Floyd, an unarmed black man who died while in Minneapolis police custody. Protests have roiled the nation for days and Confederate monuments are being taken down across the South — the area of the sport's traditional fan base.

Wallace called this week for the banishment of the Confederate flag and said there was “no place” for them in the sport. At long last, NASCAR obliged.

"Bringing people together around a love for racing and the community that it creates is what makes our fans and sport special. The display of the confederate flag will be prohibited from all NASCAR events and properties,” its statement says.

The move was announced before Wednesday night’s race at Martinsville Speedway where Wallace, an Alabama native, was driving a Chevrolet with a #BlackLivesMatter paint scheme. Wallace got a shoutout on Twitter from several athletes, including NBA star LeBron James, for using the paint scheme in the race.

The flag issue has been a thorny one for NASCAR. Former chairman Brian France in 2015 tried to ban the flying of Confederate flags at race tracks, angering many fans.

NASCAR did not address how it would enforce the policy or indicate any penalties for fans who violate it by bringing the Confederate flag to the track. NASCAR has not raced with fans since the sport resumed last month amid the pandemic and was expected to have minimal fans allowed at races this month in Florida and Georgia.

Confederate flags still fly high atop infield RVs and are waved by fans in the grandstands at most tracks. NASCAR has been more open in recent times to the eradication of the Confederate flag. Several drivers — including two-time Daytona 500 champion Denny Hamlin — said they supported Wallace in his quest to rid the sport of the flag.

The predominantly white field of drivers united over the weekend for a video promoting social change. A black NASCAR official, Kirk Price, took a knee before Sunday’s race near Atlanta in what may have been a first for the series. Wallace wore a black T-shirt with the words “I Can’t Breathe” at the race.