Nevada's new law is likely to set off maneuvering by other states, especially Iowa and New Hampshire, trying to move up their own presidential primary contests. 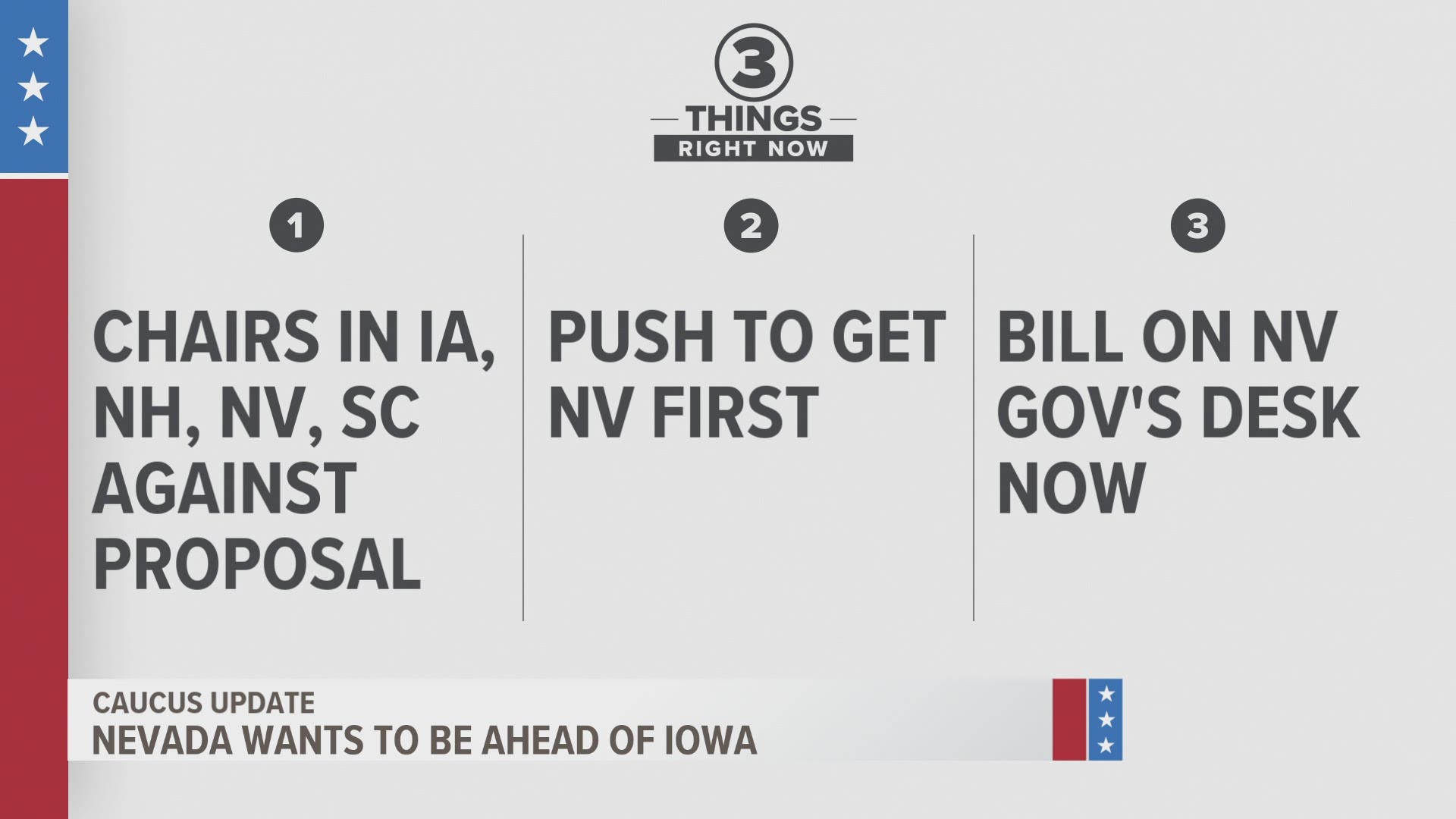 LAS VEGAS — Nevada Democratic Gov. Steve Sisolak, signed into law Friday a bill that would make the Western state the first to vote in the 2024 presidential primary contests, bumping Iowa and New Hampshire from their leadoff spots.

Signing the law is a gamble.

It's likely to set off maneuvering by other states, especially Iowa and New Hampshire, trying to move up their contests. The national political parties would need to agree to changes in the calendar or state parties could risk losing their delegates at presidential nominating conventions.

The Democratic National Committee has not yet signaled whether it would support the calendar shakeup and isn't expected to start writing rules for its nominating process until next year.

Republicans in four early presidential nominating states this week all jointly opposed the move, saying they're committed to preserving the historic schedule.

Democrats in Nevada including former U.S. Sen. Harry Reid launched the push this year to boost their state after the 2020 primary contest left members of the party questioning the process. They noted Iowa's problem-plagued caucus and that the fact that the two traditional early states are overwhelmingly white.

Before he went on to win his party's nomination, President Joe Biden performed poorly in Iowa's caucus and New Hampshire's primary. In Nevada, with a much more racially diverse population that mirrors the U.S. as a whole, he finished second.

That gave Biden momentum into South Carolina's primary, which then catapulted him to a string of Super Tuesday victories.

The new law changes Nevada’s contest from a party-run, in-person caucus meeting to a government-run primary election. Democrats nationally started shifting away from caucuses to primaries before 2020, citing the difficulty of attending an in-person meeting and the fiddly math involved to determine who wins the most delegates.

The law will require the presidential primary to be held on the first Tuesday in February in a presidential election year.

Iowa and New Hampshire have both signaled they're willing to fight to protect their status. New Hampshire has a state law requiring its presidential primary to be held at least seven days ahead of any other similar contest. The law also gives the New Hampshire secretary of state the exclusive power to set the primary date.

Racially diverse South Carolina could make a bid to move up as well. The Southern state is seen as a bellwether for candidates’ abilities to appeal to Black voters, who play a key role in the Democratic electorate. The state has the benefit of one of its own, Jaime Harrison, as the new chair of the Democratic National Committee.

“We are going to continue to let the process play out, as it does every four years, and look forward to hearing the insight and recommendations from all interested parties on the 2020 reforms, and on the 2024 calendar at the appropriate time in the process," Harrison said in a statement Friday.

Biden has a huge influence on the process as head of the party but it’s not clear where he stands on shaking up the calendar. White House press secretary Jen Psaki declined this week to comment on the order of presidential primary contests.

House Majority Whip Jim Clyburn of South Carolina, a mentor of Harrison's who is also a close ally of Biden, told The Associated Press in an interview earlier this month that there is now “clear and convincing evidence that having Iowa and New Hampshire create candidate momentum is not a good thing.”

“Those candidates on both sides -- Democrats and Republicans -- have not fared well when they get into the general elections," Clyburn said.

Asked specifically about Nevada’s moves, Clyburn said he supported a plan that moved the two traditional first states of Iowa and NH out of contention, due to what he has characterized as their relative homogenous makeup. He said that “Nevada can do what it wishes," but noted the decision is ultimately up to the DNC's rules committee.

"I don’t have any problems with Nevada being first,” Clyburn said. “I personally, though, have a problem with Iowa being first. Just give South Carolina its shot in the pre-primary window, and I think we can give guidance to the rest of this country as to how we ought to shake out our candidates, and I think that the history proves that.”