The failure of the bill is reviving calls to do away with the filibuster, the decades-old rule that requires the 60 votes. 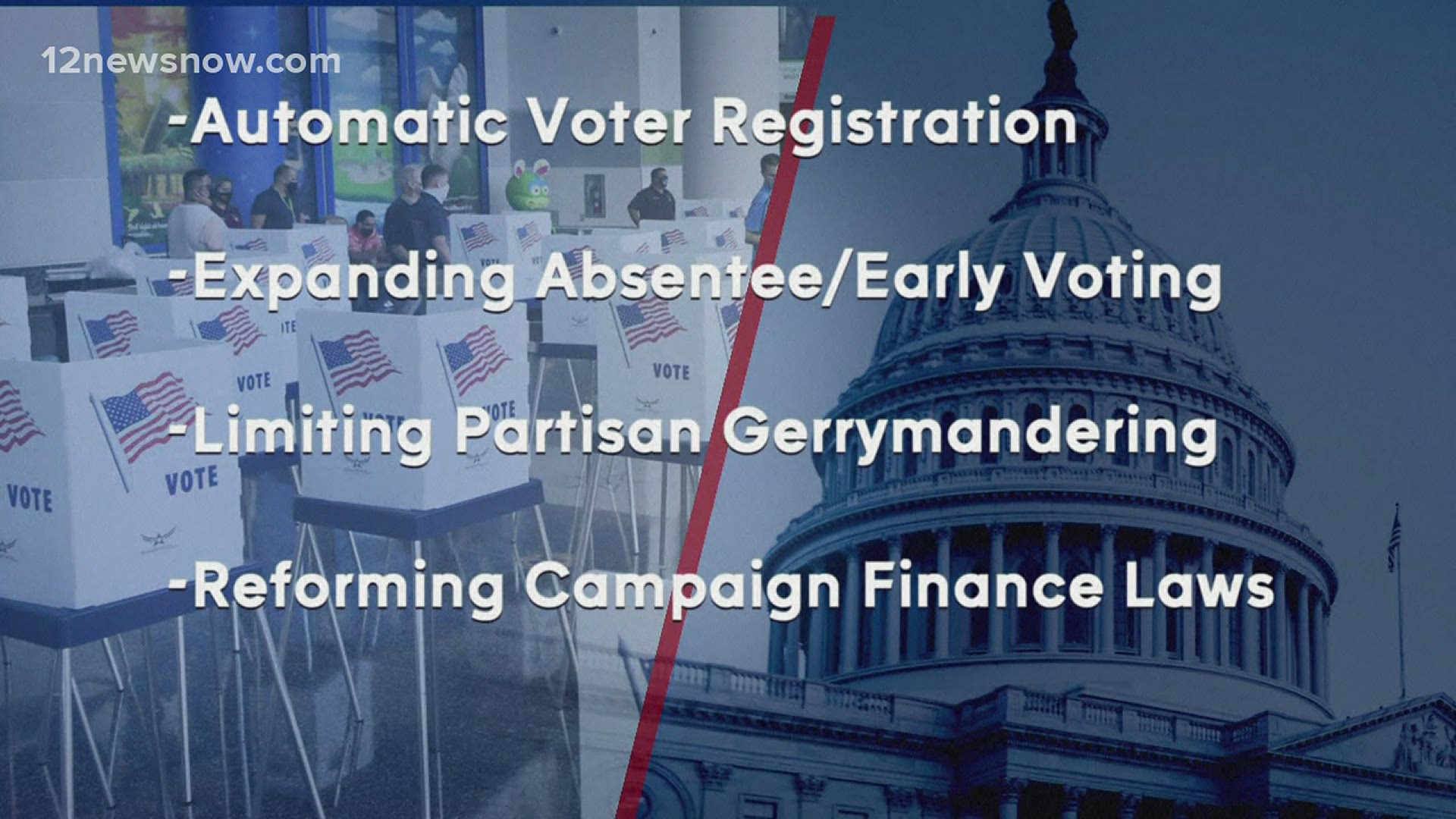 WASHINGTON — The filibuster is here to stay, for now.

And that’s posing a challenge to President Joe Biden and Democrats in Congress confronting a wall of Republican opposition led by Senate leader Mitch McConnell's “100%” focus on stopping their agenda.

This week’s defeat of an ambitious elections bill showed how far lawmakers and advocates have come in focusing attention on the cumbersome Senate rules, in place for decades, that require 60 votes to advance most legislation. In a short while, they’ve lifted the filibuster out of the procedural backwaters into the political mainstream, changing senators' minds and showing how the rules can and will be used to halt Biden’s goals.

Yet the grueling work of unifying all 50 Democrats in the Senate around a strategy to change the filibuster is just beginning. It’s not just Sen. Joe Manchin or Sen. Kyrsten Sinema the reformers will need to persuade to do away with the practice. Biden has been cool to filibuster changes, and as many as 10 Democratic senators have quietly expressed reservations, though their numbers appear to be diminishing as frustration mounts over Republican obstruction.

“It wasn’t long ago the conventional wisdom was this was unthinkable,” said Tre Easton, a senior adviser at Battle Born Collective, a group advocating for change. “Now you see what a filibuster does to a Democratic agenda.”

The downfall of the elections bill offers an inflection point, midway in Biden's first year in the White House, as Democrats take stock of the limits of their narrow hold on Congress.

While the outcome of a 50-50 vote on the elections bill mirrored the evenly split Senate's partisan divide, those lawmakers and advocates seeking to change the filibuster actually saw progress in uniting Democrats around their priority bill.

Just hours before the vote, Manchin notified Senate Majority Leader Chuck Schumer he would be on board. This after Manchin and Sinema met separately with Biden at the White House the night before and Schumer vowed to give Manchin’s proposed changes top billing.

Winning over Manchin, the centrist Democrat from West Virginia, was the step forward advocates had hoped for.

The legislation, S.1, the For the People Act, is a unique test case for a filibuster overhaul because it carries the urgency of the coming 2022 election. States led by Republicans are imposing restrictive new laws that Democrats and voting rights advocates are warning could limit voter access, particularly in Black and minority communities and in cities where Democrats tend to have sway.

Republicans counter that the legislation is a massive federal overreach into state elections that is unnecessary and designed to favor Democrats.

By uniting around the bill, it reminded Democratic senators of the power they have when working as a group. It also showed the value of forcing the issue, as happened after Republicans deployed a filibuster to block the formation of an independent committee to investigate the Jan. 6 insurrection at the U.S. Capitol. That bill actually won bipartisan support but not enough to hit the 60-vote requirement to advance.

“This is not some kind of game,” said Sen. Amy Klobuchar, D-Minn., the chair of the Rules Committee.

Credit: AP
Protesters hold banners as they march from the U.S. Supreme Court, to the Hart Senate Office building in Washington, Wednesday, June 23, 2021, announcing a "Moral March on Manchin and McConnell" and highlighting the right to vote and living wages. (AP Photo/Manuel Balce Ceneta)

Advocates of filibuster reforms are counting on Democrats to stay united as they gear up for a summer showdown, pouring millions of dollars in campaign ads and pressuring Biden and Democratic senators to change the rules.

Among the proposals being discussed for changing the filibuster is lowering the 60-vote threshold — to 55 or 51, with Vice President Kamala Harris able to serve as a tiebreaker. Some also want to require opponents of legislation to filibuster the old-fashioned way, standing and speaking on the Senate floor.

Another idea is to try to engineer a rules change by August to set up another vote on the election bill right before the summer recess, and force Republican opponents to stay in town if they want to filibuster it. But that may be a long shot in the slow-moving Senate.

The filibuster was never intended as part of the original Senate design and has been changed before. McConnell engineered a 51-vote threshold to confirm President Donald Trump's three Supreme Court nominees, expanding on the change his predecessor, Senate Majority Leader Harry Reid, a Democrat, put in place to confirm executive branch and lower court nominees. Much earlier, a significant change in the 1970s lowered the 67-vote threshold to 60.

Manchin and Sinema, D-Ariz., are among those who argue that preserving the filibuster fosters bipartisanship, rather than allowing majority passage like the House. While they are the most vocal holdouts against abolishing the filibuster, they have not ruled out supporting any changes to the rules.

Sinema signaled what many viewed as a possible road map of ideas in an op-ed released the night before the vote. “It is time for the Senate to debate the legislative filibuster,” she wrote.

Democrats are reviewing various options for the voting bill and the filibuster, and are expected to huddle privately before the next work period in July. The ideas include breaking up the bill into its component parts for separate votes or simply trying again to pass the measure, testing Republicans' willingness to continue mounting a filibuster.

Klobuchar will take the issue on the road with a public hearing this summer in the battleground state of Georgia, among the states where Republican leaders are imposing strict new laws.

House Speaker Nancy Pelosi is also setting the groundwork for Congress to consider other voting legislation, including the John Lewis Voting Rights Act, in the fall.