A local municipality is set to vote on an ordinance that would turn it into a "2nd Amendment sanctuary" for gun owners, and it's not the first in the state to do so. 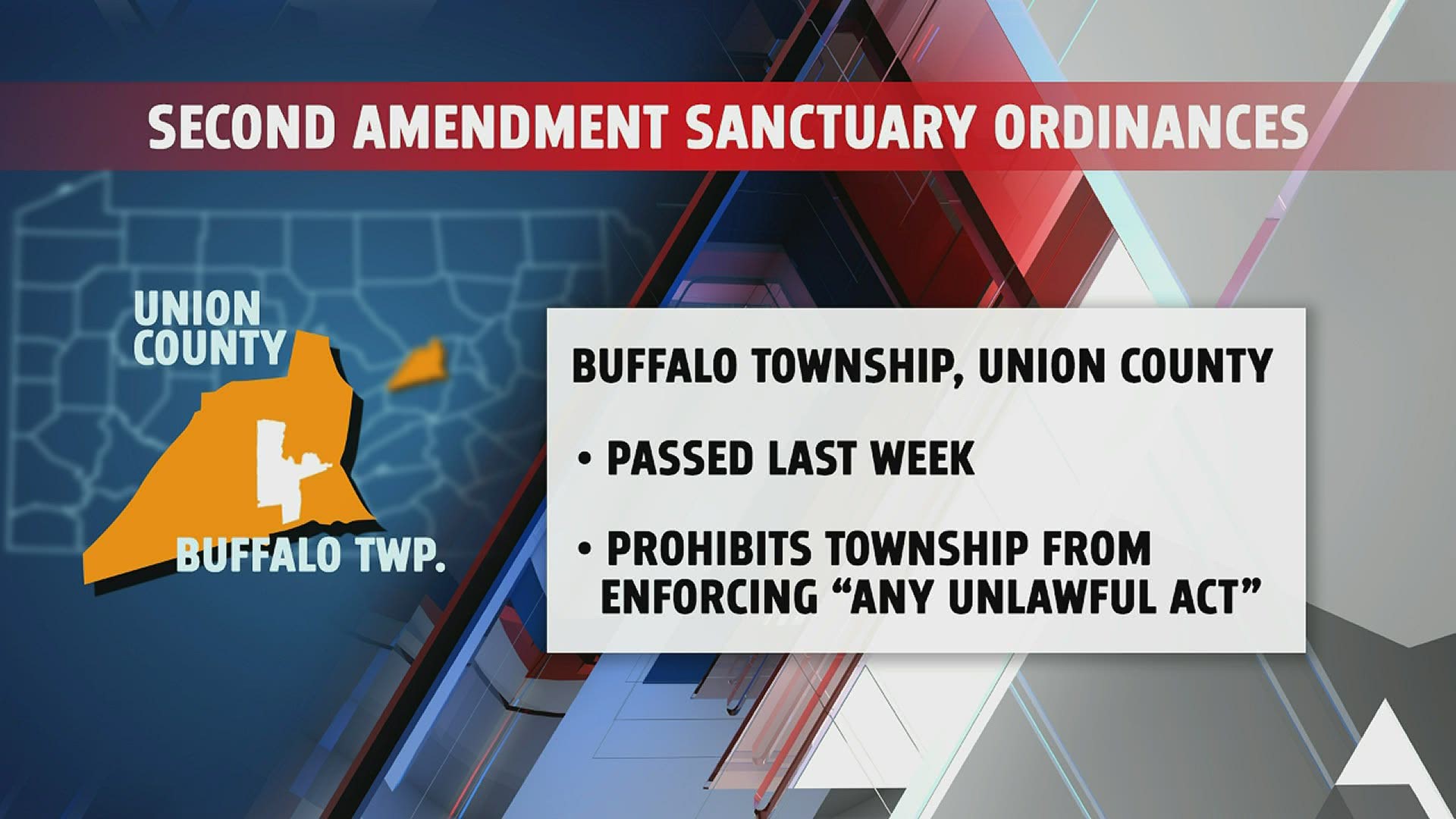 PENNSYLVANIA, USA — There's a movement happening all over the United States to shield gun owners from gun control laws. Advocates with the "2nd Amendment Sanctuary" movement are looking to municipal and county governments throughout the country to enact policies, known as Second Amendment Sanctuary Ordinances, that would prohibit governments from enforcing what advocates call "unlawful acts" regarding personal firearms at the state and federal levels.

The movement has already found allies in Pennsylvania, with the most recent effort happening in York County. Officials with West Manheim Township will consider a Second Amendment Sanctuary Ordinance within the next week.

Fred Walker proposed the ordinance, and according to the text it would "establish [West Manheim] township as a Second Amendment Sanctuary Municipality, prohibiting certain actiions and the use of township funds in ways that are inconsistent with the Second Amendment to the Constitution of the United States of America, permitting certain restrictions on gun ownsehip and possession, and authorizing and imposing penalties for the violations thereof."

If the ordinance becomes law, West Manheim Township wouldn't be the first place in the United States where gun control measures would be punishable under such a policy.

In Florida, a local official could be personally fined $5,000 and removed from office for attempting to pass a local gun regulation. That's because a law, passed in 2011, protects gun owners by giving the state the sole authority to regulate firearms and ammunition.It also holds the politician's city responsible for up to $100,000 in damages.

More than 30 Florida municipalities have sued the state, and even an official with the Florida Department of Agriculture signed onto the lawsuit. "What they did in 2011 took this one step too far," said Commissioner Nikki Fried, "our local governments should have the power to see a problem that's in their community and act."

A circuit court judge ruled the penalties are unconstitutional, but the state appealed the ruling to the First District Court of Appeals.

Two other Second Amendment Sanctuary Ordinances have already been adopted in the Pennsylvania. In Union County, The Buffalo Township supervisors approved such an ordinance on Feb. 4th.

According to The Standard Journal, the ordinance prohibits the township from enforcing "any unlawful act" regarding personal firearms, firearm accessories or ammunition. It also specifies the township cannot spend money for use in enforcing these "unlawful acts."

Supporters of the Second Amendment Sanctuary movement cite the U.S. Supreme Court decision District of Columbia V . Heller when pushing for the ordinances. In that case, the District of Columbia code made it illegal to carry an unregistered firearm and prohibited handgun registrations.

The code also contained provisions requiring gun owners who legally registered their firearms to keep them unloaded and disassembled or secured with a trigger lock, unless kept in a "place of business" or used for legal recreational activities.

In a 5-4 decision, The Supreme Court ruled the code was unconstitutional. The late Justice Antonin Scalia wrote in the majority opinion how the first clause in the Second Amendment reference to a "militia", a prefatory clause, does not limit the operative clause of the amendment.

In other words, gun owners don't have to be in the military in order for the Second Amendment to guarantee someone's right to keep and bear arms. Therefore, banning handguns and prohibiting firearms from being usable at home violates the Second Amendment.

This is what the movement's supporters are using for ammunition when advocating for Second Amendment Sanctuary Ordinances.

The group Gun Owners of America is calling for Second Amendment Sanctuary Ordinances around the state of Pennsylvania. One member, Alicia Rouscher, tells FOX43 they're "trying to get ahead of schedule before something like Virginia happens."

Rouscher is referring to gun control legislation in the Virginia state legislature. After Democrats took control of both chambers in January, state lawmakers started pushing measures to restrict access to firearms for certain people.

Among the proposals were universal background checks, limiting purchases to one handgun a month, and red flag laws that would allow authorities to take guns away from someone deemed a threat to themselves or others.

Their efforts were spurred by a mass shooting in Virginia Beach last May, when a gunman shot and killed 12 government employees before police killed him.

In January, thousands of gun owners rallied at the state capitol in Richmond to demand the legislation be withdrawn. Some protesters said guns are the only thing that stand between the public and a dictatorship, "You have no way to preserve your First Amendment Rights, or any of your other rights, that fall in line after [The Second Amendment]." one protester told Fox News.

Since the rally, more than 100 cities and counties in Virginia adopted resolutions opposing gun control measures at the state level.

Here in Pennsylvania, Democratic state lawmaker and Governor Tom Wolf have been pushing for gun control since August, when two mass shootings happened within 12 hours of each other in Texas and Ohio.

"These are three, concrete, verifiable actions that legislators can take quickly to reduce the number of graves being dug for gun violence victims" the Governor said at a rally in Harrisburg. Similar to the proposals in Richmond, Democrats pushed for universal background checks and Extreme Risk Protection Orders, which are basically red flag laws.

Additionally, they called for a resolution to support the U.S. House of Representatives to pass background check legislation proposing to end loopholes at the federal level.

Pennsylvania's Republican Senator Pat Toomey worked on a bipartisan gun control bill that would have done some of those things, but it failed in Washington.

The committee did pass 12 other gun control bills at the time, but they focused more on matching current state law with federal law. Doing so would prohibit people who commit certain crimes from owning a gun, along with consecutive and mandatory minimum sentences for violent offenders.

Another thing complicating a statewide Second Amendment Sanctuary Ordinance: there are a number of townships in the commonwealth that rely on Pennsylvania State Police for their police coverage.

In a statement to FOX43, State Police declared the following:

"Members of the Pennsylvania State Police provide law enforcement services to every municipality in the commonwealth, whether or not a municipality staffs its own part-time or full-time police department. State police operations are not impacted by local ordinances, and troopers are duty bound to enforce state law as enacted by the legislature; and guided by applicable court decisions and department policy."  - Ryan Tarkowski, spokesperson

When asked how the Governor would handle a Second Amendment Sanctuary Ordinance by the state, and whether it would pass or not, the Governor's office also issued the following statement to FOX43:

"Governor Wolf is consistent in his message of support for law-abiding, responsible gun owners and their Second Amendment rights. He wants to remove the politics of guns and proposing a Second Amendment Sanctuary City is nothing more than a political move that does not advance the rights of law-abiding gun owners. Rather it promotes ignoring the law and misrepresents his gun violence reduction proposals that speak to increasing safety and keeping guns out of the hands of people who might endanger themselves and others." - Sarah DeSantis, spokesperson

The ordinance in West Manheim Township will be considered during the board of supervisor's  meeting on February 18th.