Many people wonder if candidates are being straightforward with their claims or if they are bending the truth. 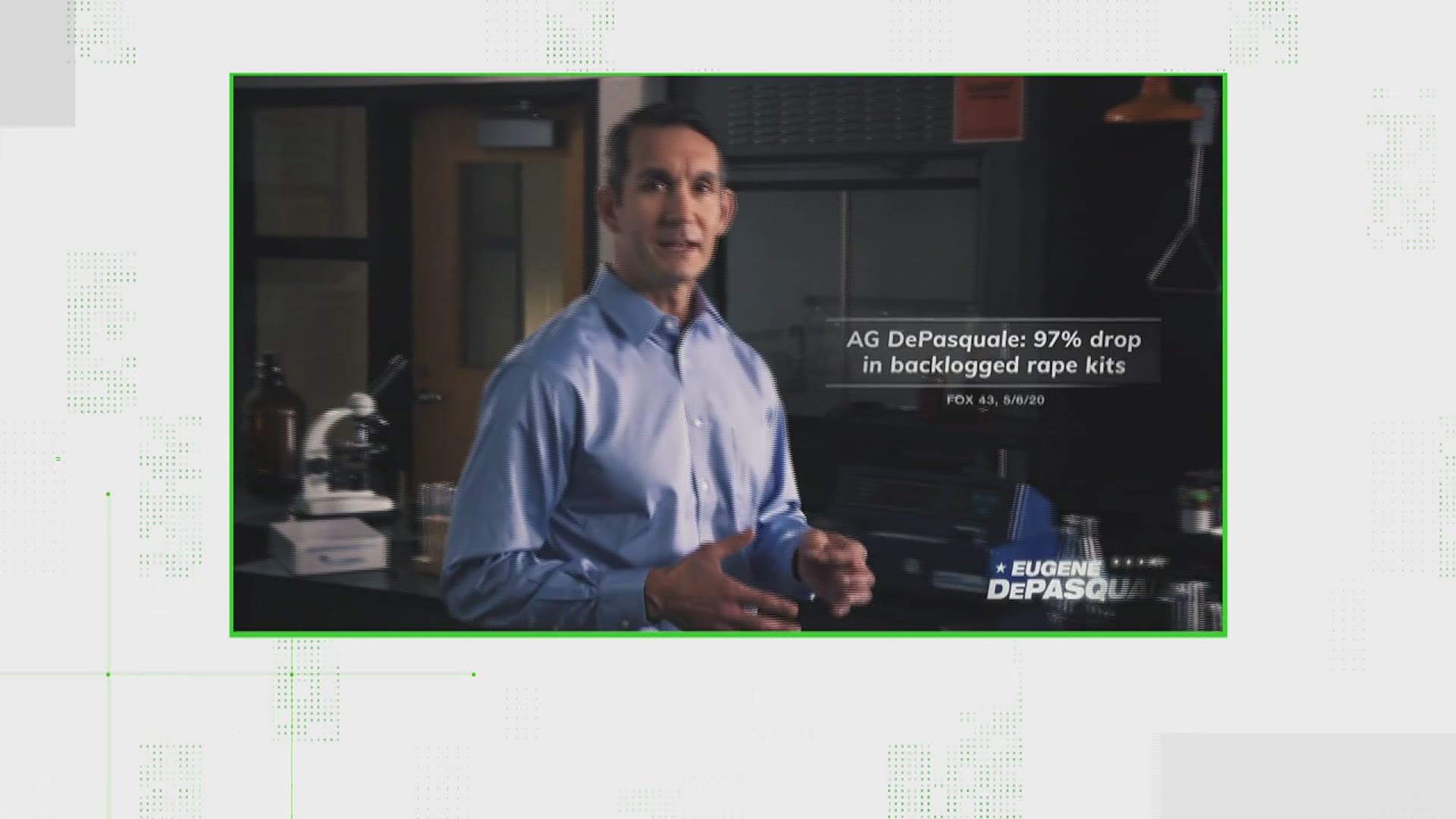 PENNSYLVANIA, USA — You see them everywhere and with the presidential election right around the corner, you can't escape them. They are campaign ads.

Many people wonder if candidates are being straightforward with their claims or if they are bending the truth in these ads.

FOX43's VERIFY team looked into a pair of ads in one of the most hotly contested races in our area — the 10th congressional district race between Republican congressman Scott Perry and his challenger —  Democrat Eugene DePasquale.

Are their claims correct?

DePasquale's touted in this ad what he's done as Pennsylvania's auditor general.

"3000, that's how many untested rape kits I discovered in Pennsylvania as auditor general," DePasquale said.

We can verify that claim. FOX43 reported on this in September of 2016. One of the reasons given for the backlog was having only three major crime labs in the state at the time. All of them were reporting a six-month backlog.

"We upped testing clearing 97 percent of the backlog," DePasquale said.

This claim is mostly verified. FOX43 reported in May —  that the backlog dropped from 3000 to 94 since the audit in 2016. However, to be clear, it was the state crime labs that got the testing done and not DePasquale himself.

Congressman Scott Perry put out an ad showing why he thinks DePasquale is the wrong choice for the people in the 10th district.

"Senior at a PA nursing home were devastated by the coronavirus. a nursing home auditor general Eugene DePasquale promised to audit one month before the virus hit," Perry said.

This is true. On February 18, DePasquale did announce an audit of ten nursing homes in the state — including Brighton Rehabilitation and Wellness Center in Beaver County.

Brighton was hit hard by the virus with more than 300 residents and staff testing positive. However, the audit announced in February was focused on finances and making sure Medicaid services the state was being billed for were actually being provided to patients.

"— but DePasquale dropped the ball and never conducted the audit. problems at the nursing home were never discovered," Perry said.

This claim is murky. It is true that the audit was never conducted. In August, triblive.com reported that DePasquale and his office said Brighton Rehabilitation and Wellness Center wouldn't comply with the audit.

Brighton claims that the auditor general's office canceled the audit in June because of COVID-19. The office denies that claim and says it was able to audit the nine other nursing homes without in-person visits.

The headline referenced in the ad refers to a Pennlive article about a separate audit of how the PA Department of Health oversees nursing homes. After a 2019 audit following up on one from 2016 — DePasquale said the state was facing an eldercare crisis.

He told Pennlive in June the issue he found was highlighted by COVID, but that it would be unfair to say that there would be no coronavirus issues if the regulations were updated.

We can verify this. At the time of the ad, the long term care facility data for the department of health shows 73 resident deaths.

These two ads are just some of the ones out there in this race. There are others put out by political action committees that are not endorsed by the candidates themselves.

If you see political ads or other claims going around on social media that you think need to be verified, let us know.

You can see all the work from our VERIFY team here.