Thousands of PA teachers have been vaccinated; here is when more could be

Gov. Wolf suspects PA won't receive an allocation of the J&J vaccine until the end of March. To date, more than 52,000 teachers & school staff have been vaccinated. 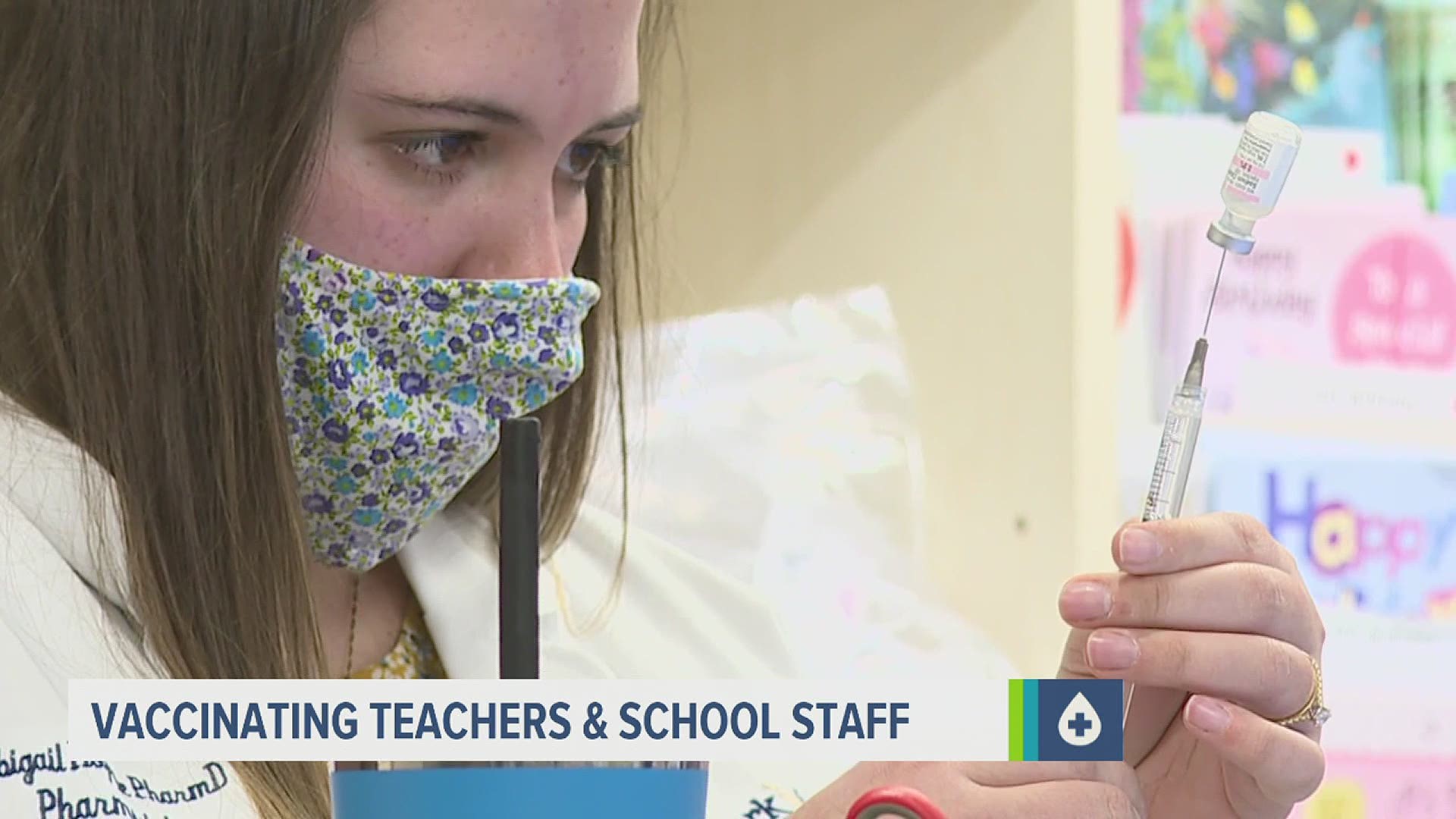 BERKS COUNTY, Pa. — So far, more than 52,000 teachers and other school staff have been vaccinated in Pennsylvania. It comes as Governor Tom Wolf says the state is seeing more and more vaccine allocation from the federal government.

"Friday's numbers: We did 150,000 vaccinations in one day," said Governor Wolf during a visit at Berks County Intermediate Unit.

Touting that recent milestone, Governor Wolf says he is confident PA will be able to meet President Biden's goal of making all adults eligible for the vaccine by May 1.

"We know logistical system has the capacity to do what it needs to do to get to that goal," said Wolf.

Even so, the governor says current supply still does not meet demand. The most recent example he cites is a lull in the Johnson & Johnson vaccine distribution. The J&J vaccine is being used to vaccinate teachers and school staff.

"The federal government promised us zero vaccines from Johnson & Johnson last week. The nation got 400,000. They're promising [us] zero this week," stated Gov. Wolf.

Wolf said he suspects PA won't receive an allocation until the end of March. That's around when the second wave of teacher vaccination could begin.

"The next batch is the last week in March, two weeks from now, and they're proposing to send out a whole lot, so we will be able to get back on track," said Gov. Wolf. "The idea is, at that point, we'll be able to finish the job."

The state previously received 94,600 doses in its initial J&J allotment. However, it isn't enough to cover all teachers. To date, more than 52,000 teachers and school staff have received their vaccine.

Across PA, Governor Wolf announced that his administration has partnered with 28 intermediate units which are working to get to the rest.

"Most of the sites are set up to do 500 doses a day, but we also have two sites that can do 1,000 per day. It's an incredible achievement when you think about tens of thousand of school workers will be vaccinated," said Mike Smith, Executive Vice President, COVID-19 Testing and Vaccination for AMI Expeditionary Healthcare. "I don't know about you, but I'm ready for our kids to go back to school."

"Less than two weeks ago, I announced a plan to vaccinate Pre-K-12 educators and because of the great partnership with the intermediate units, national guard and education groups these sites were quickly up and running. Our ultimate goal is to offer every public and private school worker a vaccine to protect people, help even more students return to the classroom, and get communities another step closer to normal," said Gov. Wolf. "Vaccinating teachers and staff not only protects our schools, it helps entire communities, and it helps the entire Commonwealth."

Outside of J&J, the numbers are increasing.

Right now, PA is receiving between 400,000 and 500,000 doses of those vaccines each week. Doses from the Federal Pharmacy Partnership for long-term care facilities or in Philadelphia are not included in those numbers.

You can keep track of the country's vaccination efforts on the CDC's website.