The event that normally brings over 100,000 people from all over the world to the Carlisle Fairgrounds is now the subject of a lawsuit. 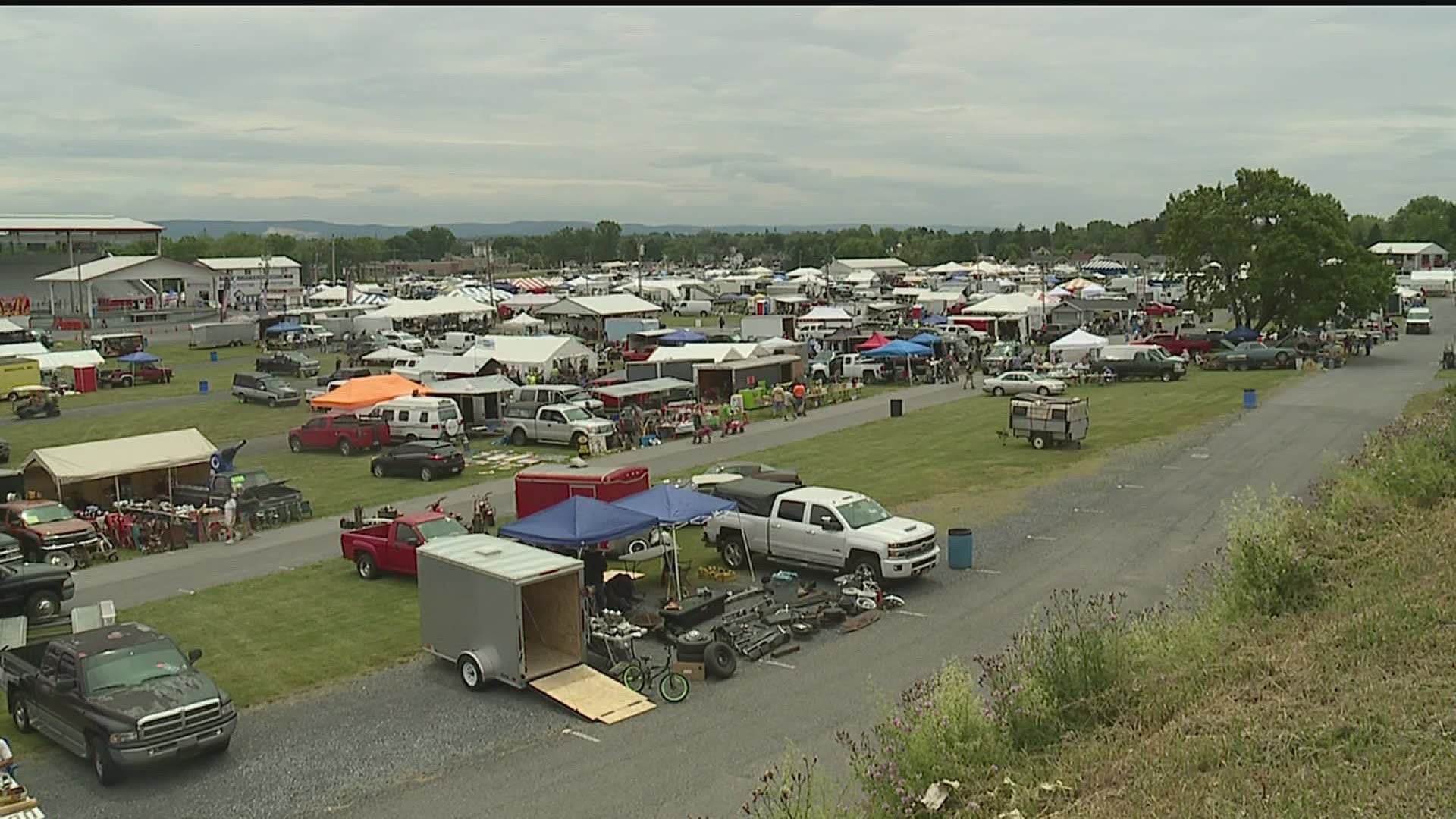 CARLISLE, Pa. — UPDATE (8:40PM):  A hearing for the Department of Health v Carlisle Events is scheduled for Thursday morning at 11 a.m. in front of Commonwealth Court.

(June 17): The Pennsylvania Department of Health is suing Carlisle Events to stop the Spring Carlisle car show from violating the 250 person gathering limit that is outlined in Governor Tom Wolf's Green Phase of reopening Pennsylvania.

According to the complaint filed by the Department of Health, the main concern is the possibility of the spread of COVID-19, as the event advertises over 100,000 visitors.

The complaint states that on June 9, Carlisle Events inquired to the Pennsylvania Department of Community & Economic Development about a waiver that would have permitted the Spring Carlisle car show to exceed the 250 person limit and allow approximately 100,000 people to attend the gathering.

However, the Department of Community & Economic Development allegedly told Carlisle Events that they must follow all green phase guidance issued by the Department of Health, including the limit of no gatherings larger than 250 people outlined in Governor Wolf's plan.

The complaint states that on June 16, the Pennsylvania Department of Health sent an e-mail to Carlisle Events reminding it of its obligation to comply with all orders, including the 250 person limit.

Despite requesting a written response from Carlisle Events, the Department of Health claims no response was received, and that according to the Carlisle Events website, they plan to defy the order.

The suit states that the Spring Carlisle car show can take place, but just at a limit of 250 people.

There has been no ruling in court at this time.

You can read the full lawsuit here: 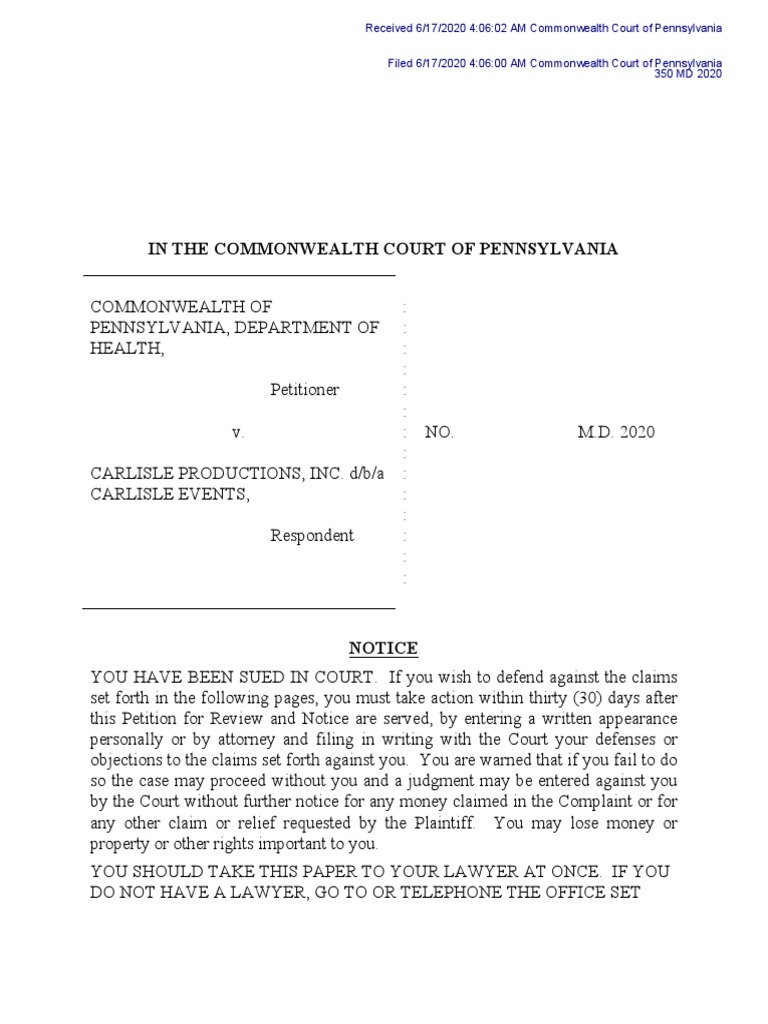 Complaint - Spring Carlisle | Complaint | Transmission (Medicine) | Free 30-day Trial | Scribd
NOTICEYOU HAVE BEEN SUED IN COURT. If you wish to defend against the claimsset forth in the following pages, you must take action within thirty (30) days afterthis Petition for Review and Notice are served, by entering a written appearancepersonally or by attorney and filing in writing with the Court your defenses orobjections to the claims set forth against you.

"There is no one location here at the fairgrounds where 250 people will be gathering at any one time during this event or any other event on our season schedule," said Garland.

Garland also said there were not 100,000 people at the event Wednesday. He says that's just the number of people over the course of the whole event which is used in advertising and when there isn't a pandemic.

"What I can say as someone that's been with our company for 10 years is that this is absolutely not a normal spring event," said Garland. "The event has been rescheduled twice, and coming into this event, we accepted that we would be seeing a diminished return from a vendor and spectator participation standpoint."

"I think Carlisle is doing a great job of what they've done here, and I really do mean that," said vendor John Mancino. "They've got hand sanitizing stations. They got distance markers. They're letting people know what you need to do, and I think that that makes a big difference." 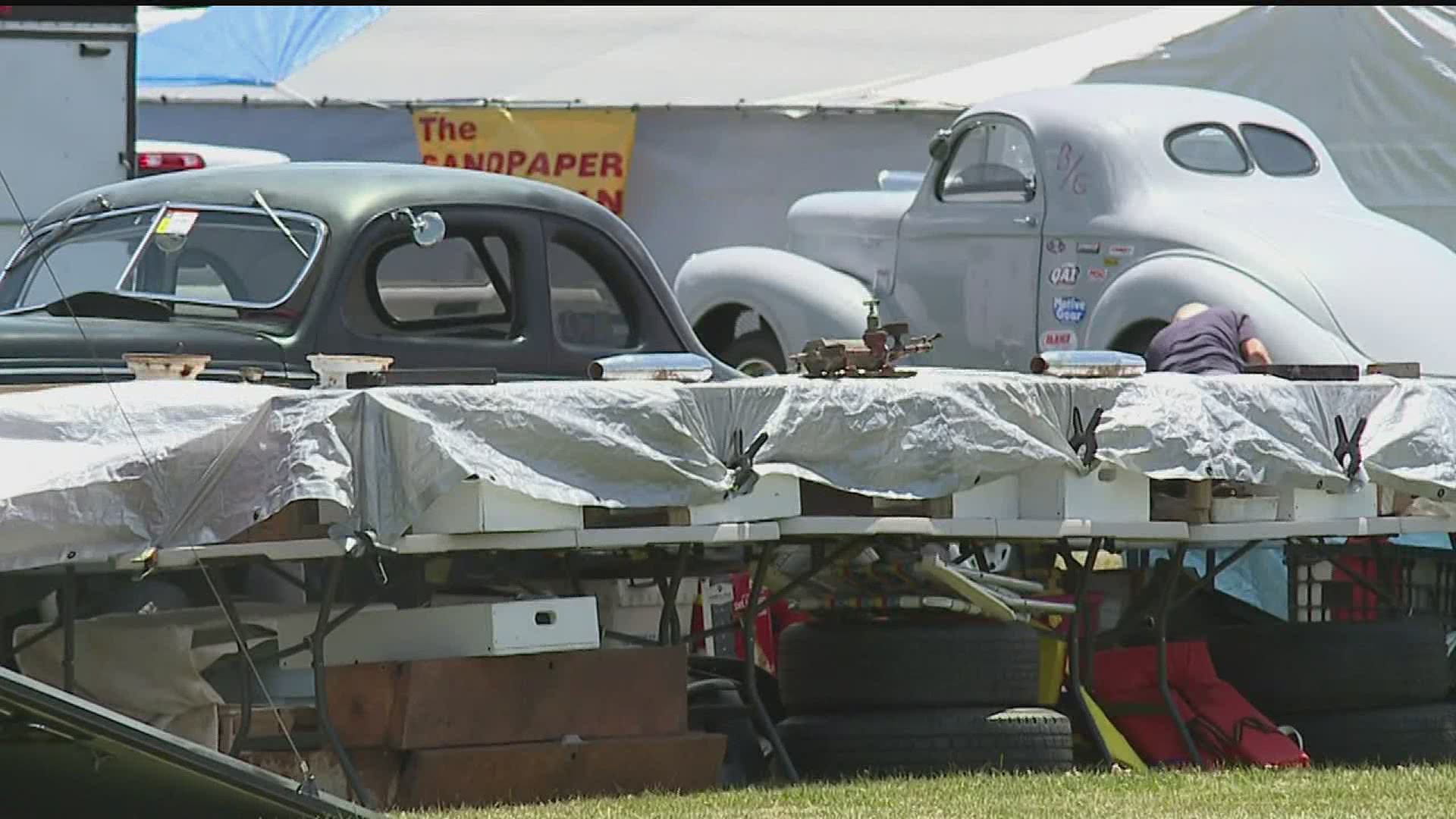 Other people are asking on social media why other flea market events are able to go on without the threat of a lawsuit and why other entertainment venues will be opening this summer with thousands of visitors expected as well. Wednesday morning, FOX43 asked Nate Wardle, press secretary for the Pennsylvania Department of Health those questions.

Wednesday evening, we received a response from Maggi Mumma, the Deputy Press Secretary: "While we can’t discuss the specifics of this action, our priority is to keep Pennsylvanians safe from COVID-19. The virus remains a threat to our communities and we must do everything we can to protect residents."

“The lack of clear and consistent guidance for employers and residents as we move through the Governor’s reopening process has led to frustration and anger. Common sense would suggest that – like outdoor recreation – outdoor sales and other events should be held to a different safety standard. The Governor sent a clear message about the ability to ignore his orders and safety precautions when he marched through the streets of Harrisburg. Instead of working with an employer to further implement precautions and allow for this event to move forward in a county that is in the ‘green phase,’ the Wolf administration instead turns to the court to shut this employer down.”

The official statement issued by Carlisle Events on the lawsuit:

"This morning, Carlisle Events received notice of a lawsuit filed by the Pennsylvania Department of Health in the Commonwealth Court. The filing seeks to apply and enforce the Department’s 250-person COVID-19 limit to outdoor events, such as our Spring Carlisle event, which opened this morning. We have retained counsel and intend to vigorously defend this action.

"Similar to other large outdoor entertainment venues and amusement parks that have or are scheduled to open under the Green Phase in southcentral Pennsylvania, our approximately 100-acre event facility provides ample space for vendors and patrons to interact in a responsible manner, consistent with the CDC’s social distancing and other COVID-19 guidelines.

"Carlisle Events has worked tirelessly to put on this event in a socially responsible manner and will continue to do so. We believe the Department of Health’s Order is invalid. Even if the Order is valid, the Department has erred in its application to outside events such as ours, or has acted arbitrarily in seeking to enforce the order against us, while permitting other entertainment venues to open.

"We very much appreciate the business and support of our patrons and vendors during this time, and we hope that we will be able to continue to provide quality entertainment events that have become such an important part of our local and regional economy for the next forty-five years and more."

PREVIOUSLY: The twice rescheduled Spring Carlisle car show kicks off Wednesday in Cumberland County but not without some noticeable changes.

The event that normally brings over 100,000 people from all over the world to the Carlisle Fairgrounds will look different.

We caught up with some of the vendors ahead of the big day.

“Welcome to my humble abode for the week,” said John Mancino of New York.

Surrounded by his collection and his family, Mancino says it's great to be back in Cumberland County. He drove over 250 miles from New York to buy, sell, and trade with his kids.

“Yee-haw!” laughed Mancino. “I was really excited that again because we haven't been able to do anything else. It’s just nice to get out.”

Mancino is a 20-year vendor at Spring Carlisle.

“A lot of the people here, it's in their blood, something they do. A lot of people do it like I do — with the family,” explained Mancino.

“Historically, Spring Carlisle is a 100,000 plus gathering of automotive enthusiasts from around the world,” explained Mike Garland, the public relations manager. 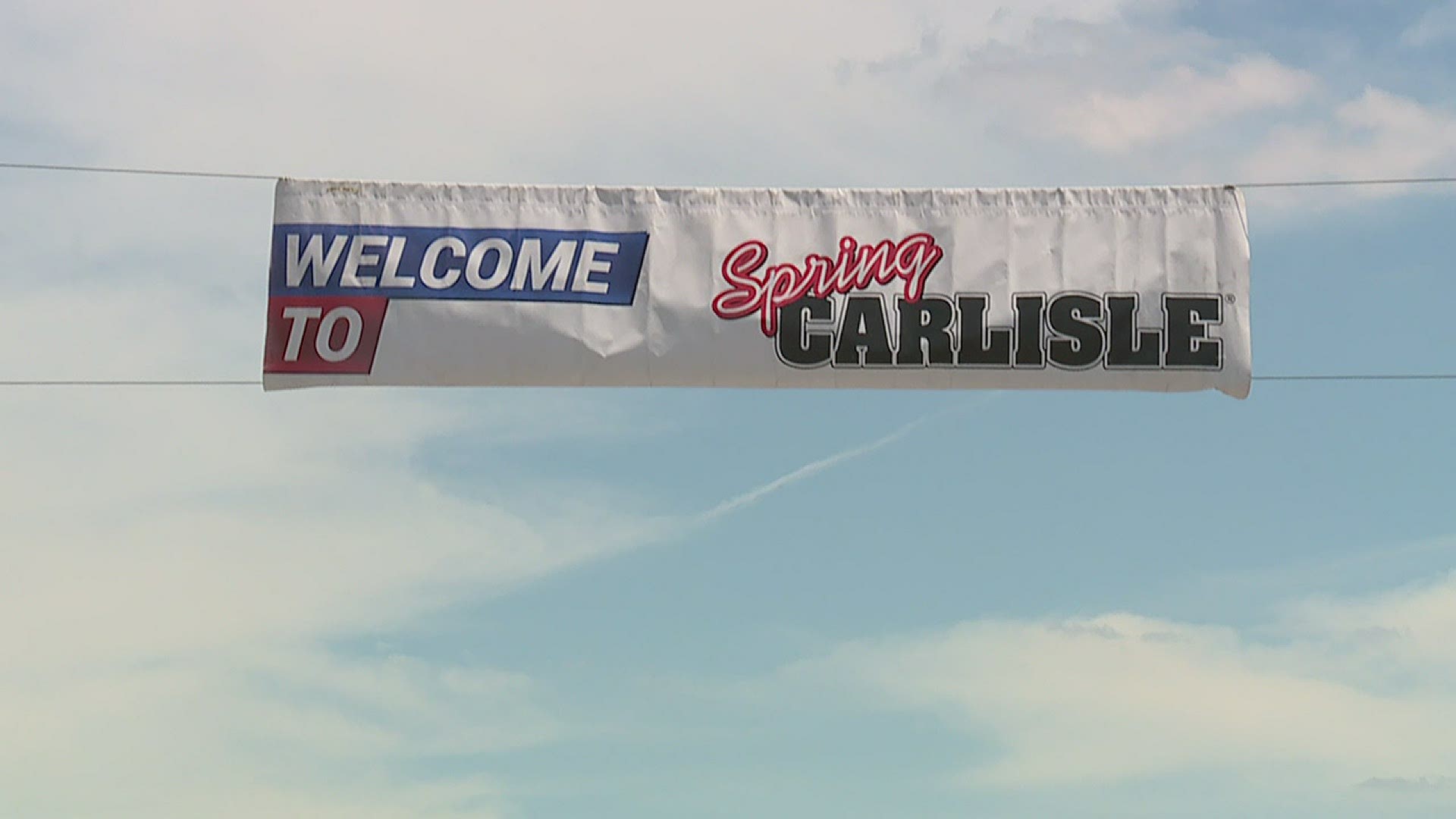 Organizers say this time around, there will be a lot less people.

COVID-19 forced organizers to cancel the in-person auction. Instead, they’re holding one online. You can register to bid here.

• Aisle layout for food lines, tape on floor for distancing

• Close up every other urinal

“We have spaced the picnic tables out a little bit more,” added Garland. “We are offering enhanced sanitation measures.”

Organizers rescheduled the event twice, which they describe as historic.

“We’ve been around since 1974 and other than a particular Sunday in the early part of the 2010’s where a hurricane had come through on the Saturday night of our corvette show and rendered the grounds unsafe for the next day, we have not altered our schedule in any form since its inception,” explained Garland.

“A bad day in Carlisle is better than good day at work,” laughed Mancino. “If it rains, it rains. We’ve been here, I’ve been here when it snowed so I’m not afraid of the weather.”

Spring Carlisle runs Wednesday through Saturday. The in-person auction will continue again in 2021.

There is a COVID-19 know before you go guide listed on its website.