Ricardo Muñoz's mother has filed a lawsuit claiming the police failed to explore other avenues before using deadly lethal force against her son.

LANCASTER, Pa. — The mother of Ricardo Muñoz, a Lancaster County man who was shot and killed by police after running at an officer with a knife, has filed a wrongful death lawsuit and named the Lancaster City Police Department, Officer Karson Arnold, the city and Lancaster County as defendants.

Former Lancaster Police Chief, Jarrad Berkihiser, who announced his retirement last year following the shooting, was also specifically named as a defendant in the suit.

On Sept. 13, 2020, Muñoz, 27, was shot and killed by Officer Arnold who was responding to a reported domestic disturbance call at a home on the 300 block of Laurel Street in Lancaster.

The officer's body cam footage showed that when the officer got in front of a home near the scene, Muñoz emerged from inside and ran toward the officer, brandishing a knife above his head in a threatening manner.

The officer then fired four shots, all striking Muñoz, who died at the scene.

The lawsuit states that Muñoz's family had been directed to call 911 despite first calling crisis intervention and that the police department failed to act in a manner that would've ensured Muñoz's well-being.

"It’s hurtful not being able to help him. Multiple times we tried to help and we tried getting help for him, but we weren’t able so it just breaks my heart," said Rulennis Muñoz, Ricardo's sister. "We went through a lot and we’re still going through a lot."

The family tells FOX43 the wrongful death lawsuit is their only option to get justice for Muñoz and answers from the city, county and police department. His sister said they have asked to see police body camera footage from after the shooting, but the family's requests have been denied.

Rulennis said the lawsuit is not just for her family, but for other families who may end up in a similar situation.

"There’s a lot of people out there who are sick as well and a lot of people like to judge and talk without not really understanding and knowing the situation," Rulennis said. "I want them to at least be a little bit considerate when it comes to speaking about a person that has a mental issue."

The lawsuit also argues that the officer had neutralized Muñoz with the first two shots, but the officer proceeded to fire two more shots into Muñoz.

"What exactly was the plan here? Was the plan to investigate a crime? If so, why? Because there was no crime being committed," said Ryan Borchik, an attorney for the Muñoz family. "Was the plan to get him to the hospital? If so, why respond with one lone police officer armed only with a gun?"

According to the lawsuit, the Muñoz family contacted the city and county at least five times since 2019, including once a few weeks before the shooting, seeking assistance to manage Ricardo's schizophrenic episodes.

Despite Ricardo's well-recorded history of mental health issues, neither defendant county nor city placed a hazard alert on the family’s home for future service calls, the lawsuit read.

"It [the lawsuit] seeks to shed a light and put a spotlight on these agencies to make sure that they change their practices going forward so it doesn’t happen to another family who has loved ones who are suffering from mental health issues," said Daisy Ayllon, the family's attorney.

The suit also accuses the city of violating the Americans with Disabilities Act, which requires police to make reasonable accommodations for people with disabilities.

Ricardo's mother is also suing for intentional infliction of emotional distress, unlawful detention and one count of battery, accusing police of tackling her against a police vehicle, which bruised her leg.

The City of Lancaster and Lancaster Police Department declined to comment on pending litigation.

"We stand by the decision, based on the facts and the law, that the officer was justified in using lethal force as Mr. Muñoz presented an imminent threat to the officer’s life," the Lancaster County District Attorney's Office said in an emailed statement.

Lancaster County District Attorney Heather Adams said that the firing officer acted to preserve his own safety and the safety of others. Body camera footage from the firing officer was a key piece of evidence in the investigation.

You can watch the body camera footage below:

“The responding officer was immediately confronted with a threat at 306 Laurel Street on the afternoon of September 13,” Adams said. “The officer had no time or opportunity to do anything but run for his life and only resorted to lethal force when he confirmed an imminent threat to his life remained. The officer’s belief that lethal force was necessary to defend himself was reasonable and therefore, the use of force was justified under the law.”

You can watch the full press conference given by Adams on Oct. 14, 2020 below:

Injuries from the gunshot wounds killed Muñoz immediately, according to the forensic pathologist who performed Muñoz’s autopsy.

At the scene, police recovered a large fixed-blade, hunting-style knife next to Muñoz’s body, which he used in his charge at the officer.

It is pictured below:

His sister told FOX43 that Muñoz's mother called the Lancaster Bureau of Police and Crisis Intervention on the day of the incident, hoping that Muñoz could receive help.

Lancaster Mayor Danene Sorace called the shooting "a heartbreaking day for our city" and said the incident highlights the need for more mental and behavioral health programs across the state.

"We called for help. We didn't call for bullets," said Rulennis Muñoz, Ricardo's sister, after the DA's announcement last year. "This incident has really hurt us emotionally and mentally."

Last year, the Muñoz family insisted they wanted medical help and for Munoz to be taken to the hospital.

Translating for her mother, Rulennis Muñoz said, "That the cop that shot my brother didn't kill my brother; he also killed her as well."

Attorneys for the family say they are dismayed with the decision by the DA but not because of the ultimate outcome.

"The investigation doesn't seem to be as thorough as it could've been. For example, Rulennis' sister who was an eye witness who spoke immediately before and after the shooting wasn't even interviewed," said Michael Perna, who is representing the family. "They [the DA's office] also told us today they didn't look into at all whether the officer in question followed best practices with regard to responding to a person well known to them as mentally disturbed."

You can read the full lawsuit here: 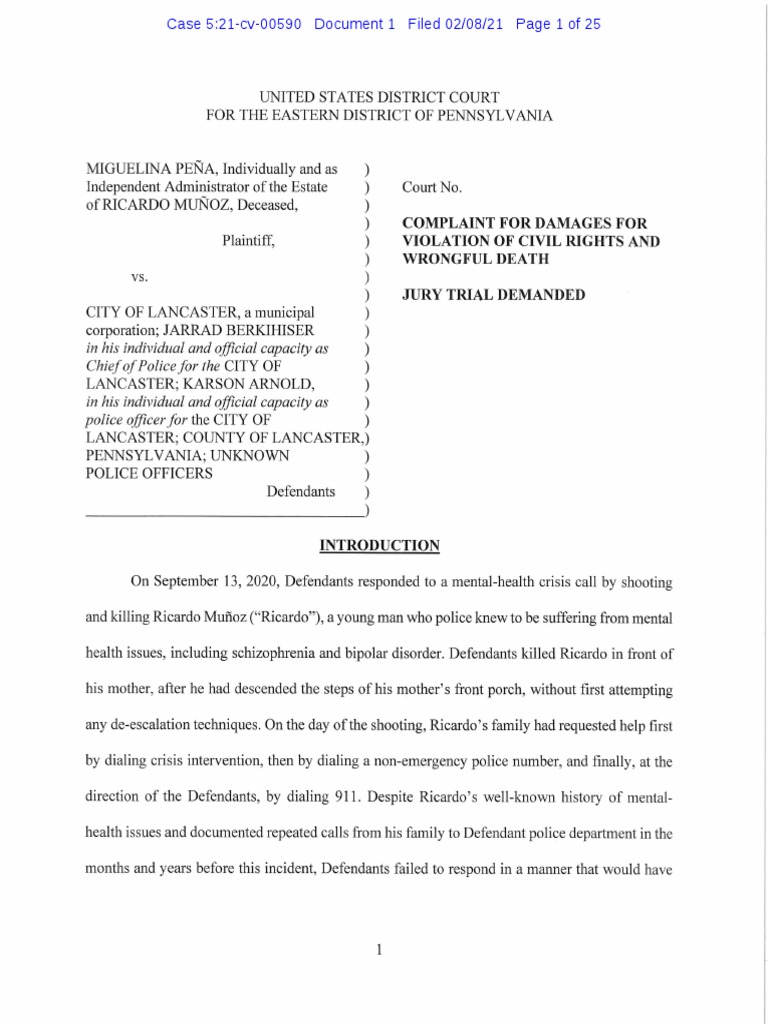