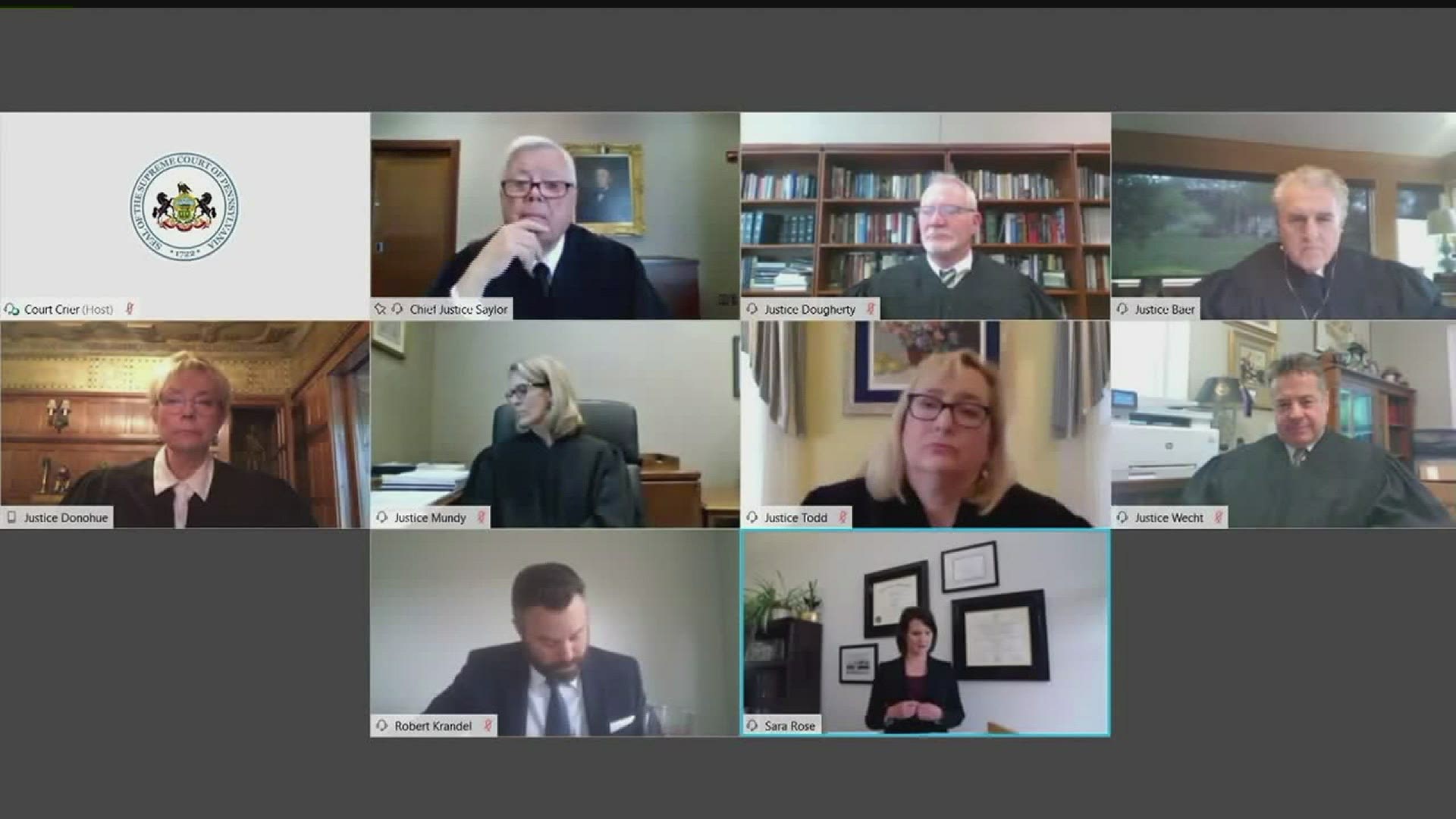 The case centers around a policy issued by President Judge John Tylwalk on September 1, 2019 in Lebanon County. FOX43'S Jamie Bittner exposed the story of Melissa Gass that same month. Gass is on probation and uses medical marijuana to treat her epilepsy. After the revised policy was issued in Lebanon County, Gass was joined by Ashley Bennett and Andrew Koch in a lawsuit filed in October by the ACLU.

The PA Supreme Court temporarily stalled the medical marijuana probation policy in Lebanon County until arguments could be heard on the case.

Gass, who is on probation for simple assault until October, told FOX43 she was surprised by one part of the argument Tuesday during the PA Supreme Court hearing.

"They said that we all have previous drug charges and I do not," said Gass. Gass said during the time period that she was not allowed to use her medical marijuana she was experiencing approximately 20 drop seizures per day.

Should people on probation be allowed to use medical marijuana? I first told you about Melissa Gass, who suffers from epilepsy, back in September. Now, she's talking to me again as her case and the case of 2 others is being heard by the PA Supreme Court that challenges a policy by the 52nd Judicial District of Lebanon County. Full story on WPMT FOX43 at 4 and 5 and catch up here: https://www.fox43.com/article/news/local/pa-supreme-court-hears-medical-marijuana-case/521-f3f29702-941e-4ebc-bd2b-e7d4444d5fe0?fbclid=IwAR0tVgbh8-6eRHhoyv1F5ZC4W2Ee5iPIyixEPu689YAtz9kWjkjCnVZnahg

Lawyers for the 52nd judicial district argued, however, that the immunity the ACLU pointed to in the state's medical marijuana law does not exist.

"They have claimed that their health and the medical marijuana law has all this sweeping immunity. It doesn't," said Robert Krandel, legal counsel with the Administrative Office of Pennsylvania Courts.

He added, "they've claimed that the medical marijuana law has essentially built an entire wall around this part of their life such that in the probation context the courts could never under any circumstances evaluate what's going on with their health."

Lebanon County's 52nd judicial district also argued that marijuana is still considered illegal nationwide and a schedule I drug which is defined as having no medical use and a high potential for abuse. The court added, the issue becomes more complicated when factoring in the role of treatment court offenders who may be facing other addiction issues.

"They are all on a path back to good citizenship. The court is focused on trying to get them rehabilitated," said Krandel.

Should people on probation be allowed to use medical marijuana? This is Ashley Bennett, who is on probation and has joined Melissa Gass & Andrew Koch in challenging Lebanon County's 52nd Judicial District in PA's Supreme Court. She lives with PTSD. See the full story on WPMT FOX43 at 4 and 5 https://www.fox43.com/article/news/local/pa-supreme-court-hears-medical-marijuana-case/521-f3f29702-941e-4ebc-bd2b-e7d4444d5fe0

"I've given up so much. I've allowed so many people to take so much from me that I wasn't going down without a fight this time," said Ashley Bennett, who is also part of the lawsuit and who is on probation until June 4th for possession of marijuana. Bennett said she lives with PTSD and obtained her state-issued medical marijuana card last spring.

"Monthly I have to hand in receipts," she said. "So, I have to give my probation officer receipts every month as to what I'm getting, what is in my possession, what is in my system and all that. So, if they're (the person on probation) using it the correct way and going about it the proper way I don't see why there should be anyone standing in the middle of that," said Bennett.

Lebanon County is not the only county in Pennsylvania to have this type of policy. Watch as FOX43 broke down the probation medical marijuana policies by county in January.

"If the court wants to offer its input I think and guidance to the districts on how to implement these policies and help steer the policy I think that's a reasonable approach rather than throwing the whole policy out like the petitioners have advanced here," said Krandel.

FOX43 requested an interview from the lawyers representing Lebanon County's 52nd judicial district, but they offered no comment due to the pending case.

CATCH UP ON THE CASE HERE

RELATED: Who can use medical marijuana? Rules are different for this group of people

RELATED: PA Board of Probation responds to question regarding medical marijuana policies as PA Supreme Court case moves ahead

RELATED: Lawsuit transferred to PA Supreme Court that challenges policy that prohibits medical marijuana use for people on probation

RELATED: ACLU sues over Lebanon County’s policy that prohibits medical marijuana use for people on probation

RELATED: “LOOK ME UP”: Woman living with epilepsy fights back against probation services policy on medical marijuana