We asked the Vice President about reopening schools this fall, the new mask mandate in Pennsylvania, among other topics. 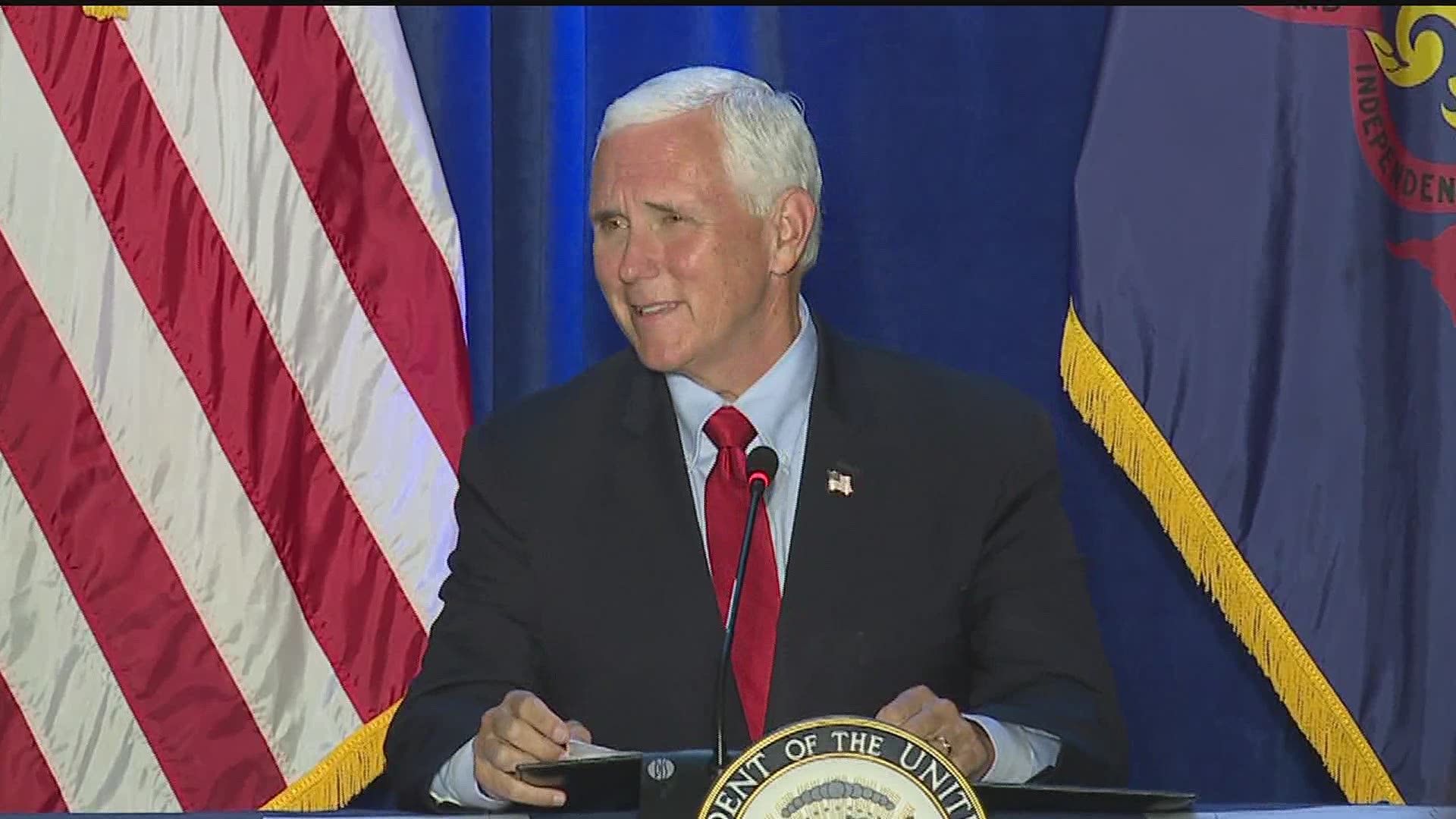 "It's great that he is in Pennsylvania," said Gregg Meglic, a supporter of President Trump. "Pennsylvania is obviously a swing state, and [he is] building up the support for reelection."

Vice President Mike Pence greeted local leaders with an elbow bump, including Lancaster County Commissioner Ray D'Agostino and Congressman Lloyd Smucker, before he climbed inside his campaign bus and headed into the heart of Lancaster County. There, he surprised a crowd of supporters with waves.

“We happened to stumble upon a group cheering him on,” said supporter Kari Nye. “We got some waves and thumbs up from him - so that was exciting!”

Then, escorted by a motorcade of Pennsylvania State Police, its helicopter circling high above, and other authorities, Pence drove to Kreider Farms for a private fundraising event, which the media could not attend. We drove to Pence's next stop, about an hour away, in Chester County.

Pence held a roundtable discussion on the economy at Rajant Corporation.

“We begin by bringing greetings from a great champion of Pennsylvania,” said Vice President Pence. “I bring greetings from President Donald Trump. I really believe the economic comeback underway is first accredited to the resilience and character of the American people.”

We spoke one on one with the VP about some of Pennsylvania’s most pressing issues. Our full interview: 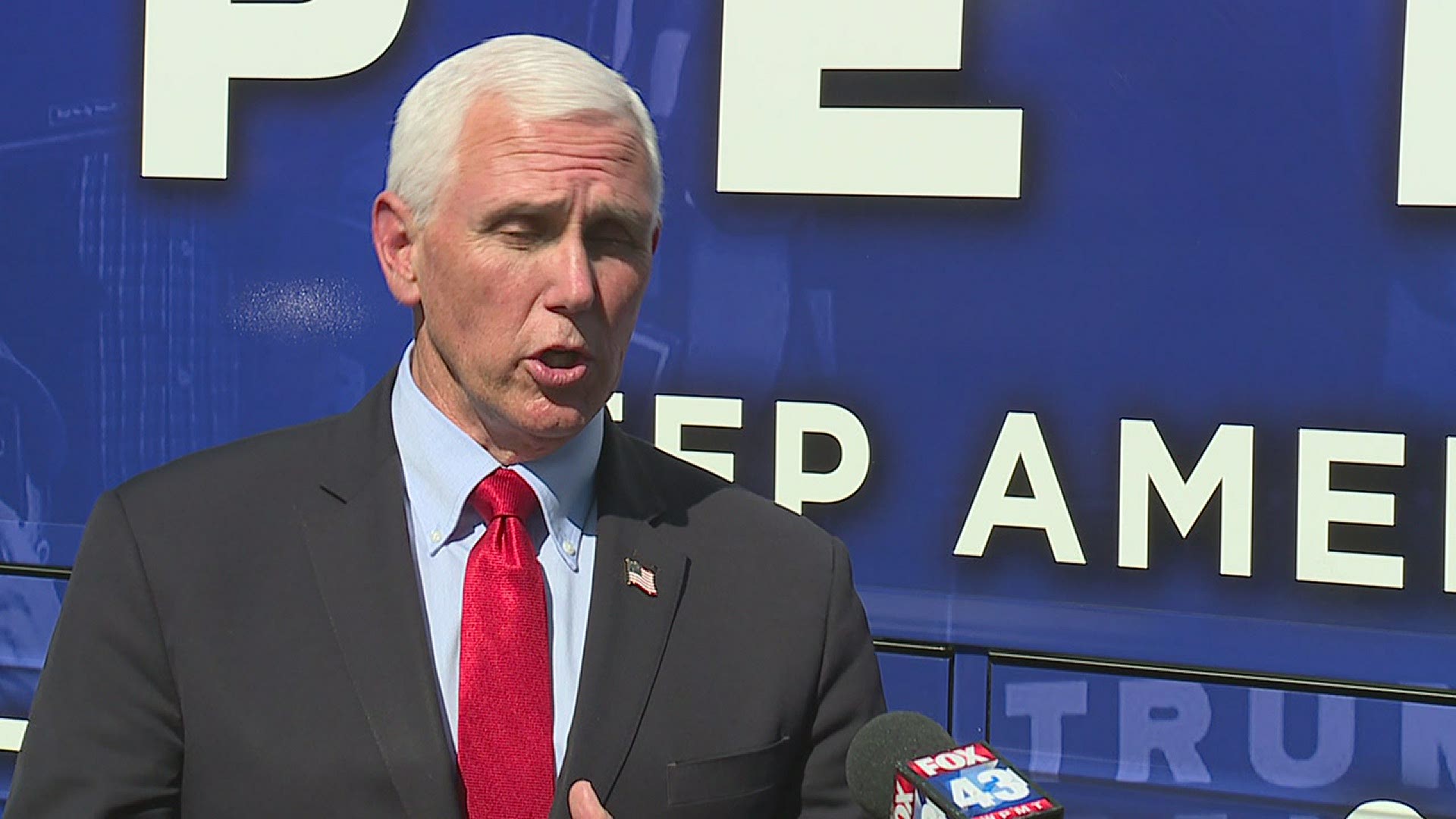 “How would you rate Pennsylvania's response to the pandemic and what would you do different in the future?” asked FOX43’s Grace Griffaton.

“I couldn't be more proud of the response of the people of Pennsylvania and of America every step of the way in this pandemic,” responded Pence.

During the one-on-one, we asked Pence if he agrees with the new order that requires Pennsylvanian’s to wear masks if people can’t be socially distant from other people.

“I think Americans should wear a mask anytime that state in local authorities determine it's appropriate,” said Pence.

We also asked the VP about the push by President Trump to reopen schools this fall.

“President Trump and I believe as we open up America again, we have to open up schools. We don’t want our kids to fall behind academically.”

Finally, we asked about Joe Biden, the Presumptive Democratic presidential nominee, who also made a trip to the Commonwealth Thursday.

“Joe Biden has roots in Pennsylvania. Why are you and President Trump a better fit [for PA] and why should Pennsylvanians support you?”

“The people of Pennsylvania said ‘yes’ to President Trump in 2016 because he pledged to make America great again, by cutting taxes, rolling back regulation, unleashing American energy, and fighting for free and fair trade. President Trump has done that and then some,” responded Pence.

“Pennsylvanians don’t need more meaningless Mike Pence photo-ops or bad-faith lectures from the most corrupt Administration in modern history about ‘law and order’ and the importance of statues. The economy is in shambles and nearly 7,000 Pennsylvanians have lost their lives to the coronavirus. As Vice President Joe Biden said, we need the Trump Administration to lead -- or to get out of the way so others can.”