“When you hear your child is going to get flown it’s a little alarming," Matthew Best said. "You’re like 'Oh, something really serious is going on.'" 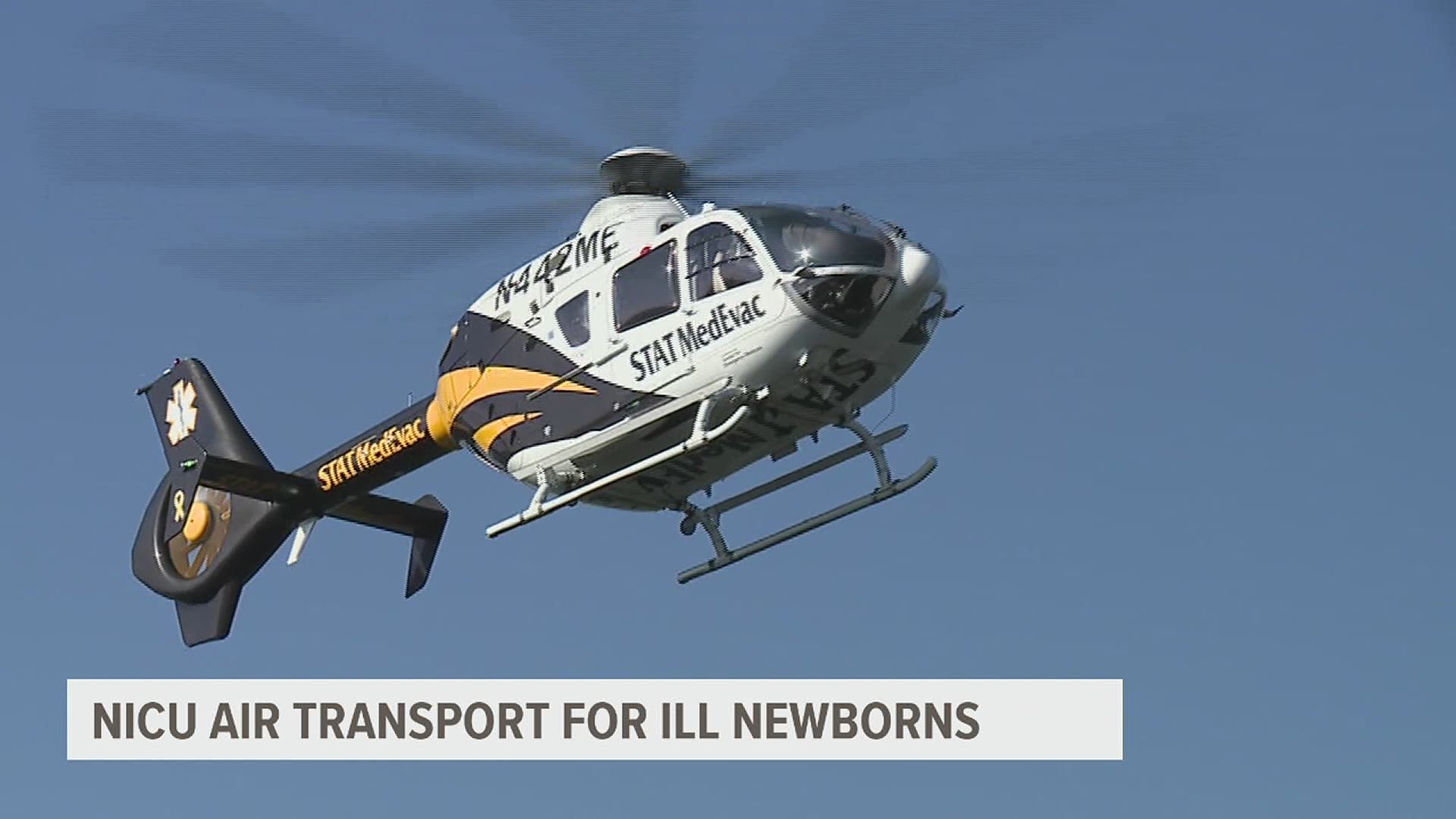 HARRISBURG, Pa. — The thought of being told you or a loved one needs to be airlifted to the hospital in an emergency situation can be scary. That was the case for a new mom in York County, after she delivered twins. But sometimes, taking to the sky is the best way to receive that necessary care.

“When you hear your child is going to get flown it’s a little alarming," Matthew Best said. "You’re like 'Oh, something really serious is going on.'"

Like most parents Alex and Matthew Best had a birth plan -- but they also knew that plan could change, which it did. The delivery was scheduled at UPMC in Hanover, where Alex works as a delivery room nurse.

Of the twins, Parker was born stable and healthy, but Peyton was in respiratory distress and had to be flown to the level three neonatal intensive care unit at UPMC Harrisburg.

When it comes to your health, sometimes things don’t go as planned.

This morning on @FOX43, how a team of doctors & flight nurses in Harrisburg are working together to make sure there isn’t a break in care — when a patient needs to be flown by helicopter to the hospital. @UPMC pic.twitter.com/OxkHYFNf2d

The plan of action began from the minute the nursery made the call that Peyton needed a higher level of care. It's something Neonatologist Dr. Justin Buland said is an important team effort.

“We have set up here an advanced neonatal team that can provide care as rapidly as possible and that care starts with the phone call," Dr. Buland said. "So we have our transport nurses and physicians on that phone call. We then can deploy our team by helicopter. STAT MedEvac is our partner in that.

While working on providing the best care for Peyton, mom is still a patient too.

“An important piece when we go and do our transports is we talk to the moms, Dr. Buland said. "This is what we do all the time, we deal with how moms cope through having their baby not with them."

There are a lot of moving parts to get from point A to point B. While the transport team is in route Dr. Buland and a team of NICU doctors and nurses are laying out instructions to provide seamless care for the baby.

“Really, what we’re doing is trying to make sure we have a transport team that doesn’t just operate as a transport team...but really applies excellent care across the region," Dr. Buland went on.

There's never a break in the care. From the delivery to the transport, and to the hands of the NICU doctors and nurses, something they can collectively agree on, the team in the sky is good at what they do.

“You really probably have some of the best healthcare providers that the world has to offer taking care of your baby so I wouldn’t worry too much," Matt Brittain, a flight nurse with STAT MedEvac said. "More so be excited that they are going to get there quicker and get the best care they can."

While the pilot is navigating the flight, the STAT MedEvac flight nurses are in the back caring for the patient. Landing is a critical part of the flight process, as well as making sure the patient is at ease.

“There’s a lot of hand holding, a lot of comforting, to make sure they know we have them safely in our hands," Jenn Peterson, another STAT MedEvac flight nurse said.

The Best family was separated during this -- dad drove down to Harrisburg while baby Peyton was flown. Mom then stayed in Hanover for a few more days with Parker.

They said it was hard to separate at first, but they knew it was the right thing to do.

Mom, dad, Peyton, and Parker are now all home and healthy.

"It didn’t fully sink in until we were home with both of them we were like 'Wow, okay we have two babies.'" Alex said. "Sometimes we’re still shocked that there’s two. But it’s definitely going a lot better than I imagined having twins."

Despite the ups and downs, they can all agree with Dr. Buland that discharge day was their favorite.

“There’s no better day than when you take your baby home," Dr. Buland said.