Meet the 'Piano Man': A soulful performer not letting COVID-19 stop the music

COVID-19 took a lot from us. For some performers, it stole their gigs when restaurants were forced to stop dine-in service. Even now, some musicians are suffering. 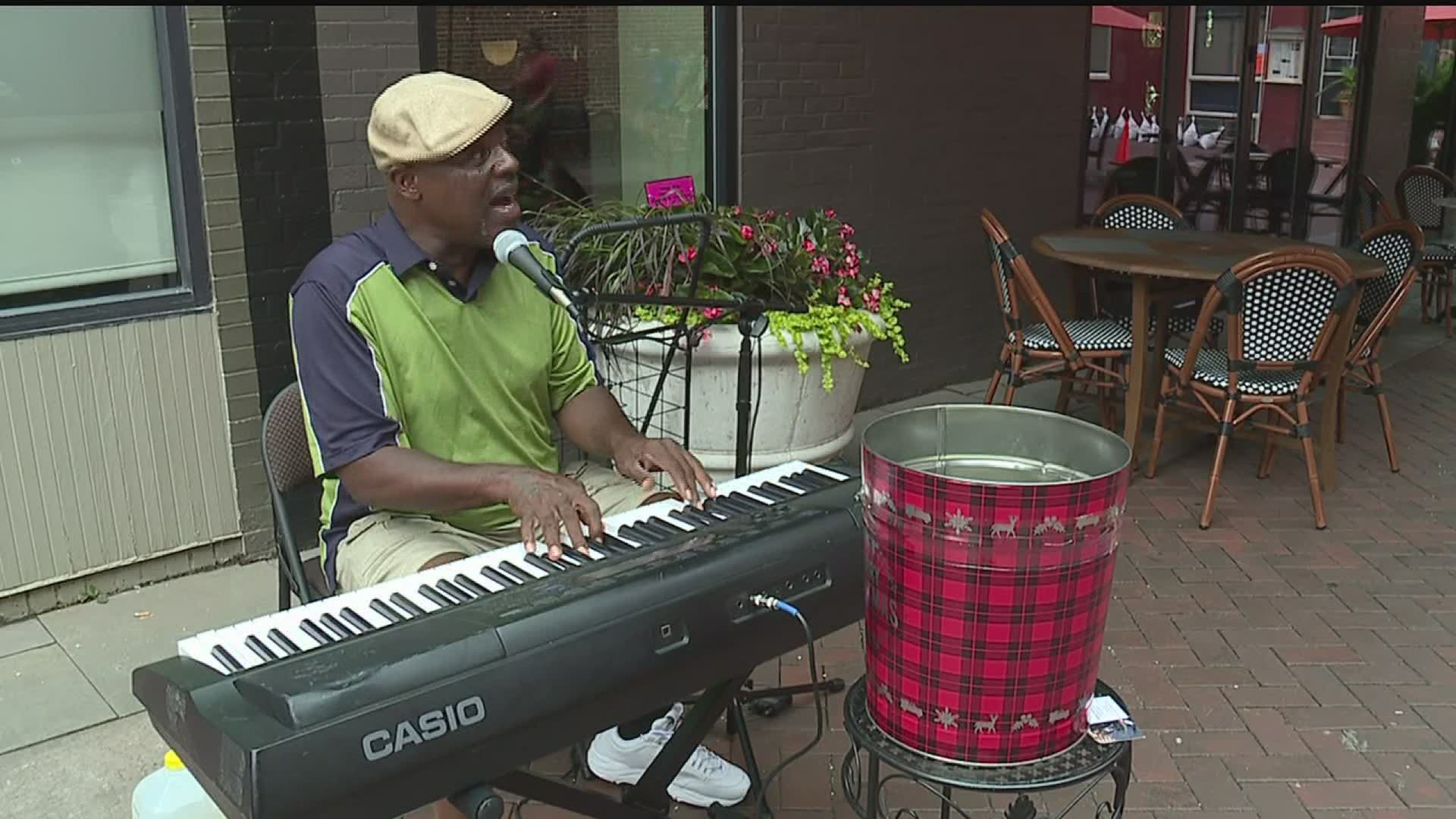 LANCASTER, Pa. — COVID-19 took a lot from people. For some performers, it stole their gigs when restaurants shutdown. Restaurants are once again able to offer dine-in service, but owners are limiting the amount of people inside. At many businesses, that includes the number of performers.

In Lancaster, the self-proclaimed ‘Piano Man’ is making ends meet until he picks up more gigs. Antoine Cameron calls himself the ‘Piano Man’, but you could also call him a one man band.

“I’m playing bass, and then, you got a piano going, so it's two different instruments,” he explained to FOX43.

Add a deep soulful voice and a drum sound on the keyboard, and it sounds like a full band outside Lancaster Central Market. That’s where the Piano Man is playing on Tuesdays and Saturdays. He sits with his keyboard, a donation bucket, and lemonade to hydrate.

“I’ve been playing piano for 55 years,” explained Antoine. “I was 5 years old and the Holiness Church in Cleveland, Ohio banging on the piano, and the mother of the church, mother of all came by and praised the Lord, ‘bless his hands.’ A week later, I started playing the thing.”

He’s been playing for kids since he was a kid, and now, he’s making the adults feel like one too.

Tuesday morning outside the market, he pulled a couple aside to share a dance.

“You managed to grab the prettiest girl in Oregon, and you held onto her for 43 years,” said Antoine.

“We have felt the romance a long time,” said Cecil, who didn’t provide a last name., “I fell in love with her when I first saw her when she was six.”

“It made us feel young,” said Chris, Cecil’s wife, when asked about the spontaneous dance request.

It’s a private moment in a public space that likely wouldn't have happened if the pandemic hadn't.

“About 6 weeks ago, I said, 'let me go down to the market and set up,’” explained Antoine.

With all of his gigs cancelled because of COVID-19, Antoine had nowhere else to go. Plus, the Piano Man noticed other musicians weren’t doing well streaming their performances online.

“The ast gig was the Greenville Inn,” explained Antoine. “[That was] a week and a half before they shut everything down.”

The curtains may have closed on those opportunities, but another opened up. Now, he’s earning fives, tens, twenties, and plenty of applause.

“Some people coming by putting nickels, pennies in -- it's not so much the bills, you know, it's just the whole, it's a blessing,” explained Antoine. “It's just a blessing from the almighty to be able to do what I do, to be able to pay the rent, the car payment.”

Before we said goodbye, the Piano Man had some good news to share: One of the very people who enjoys his alley performances hired him for a private gig this weekend. Antoine tells FOX43 he wants to thank the folks who run the central market for giving musicians a safe space to play and earn a living until things go back to normal.

Musicians impacted by COVID-19 can find a curated list of resources here.