Ocean City Police say the use of force seen during the arrests over the weekend is being reviewed internally. 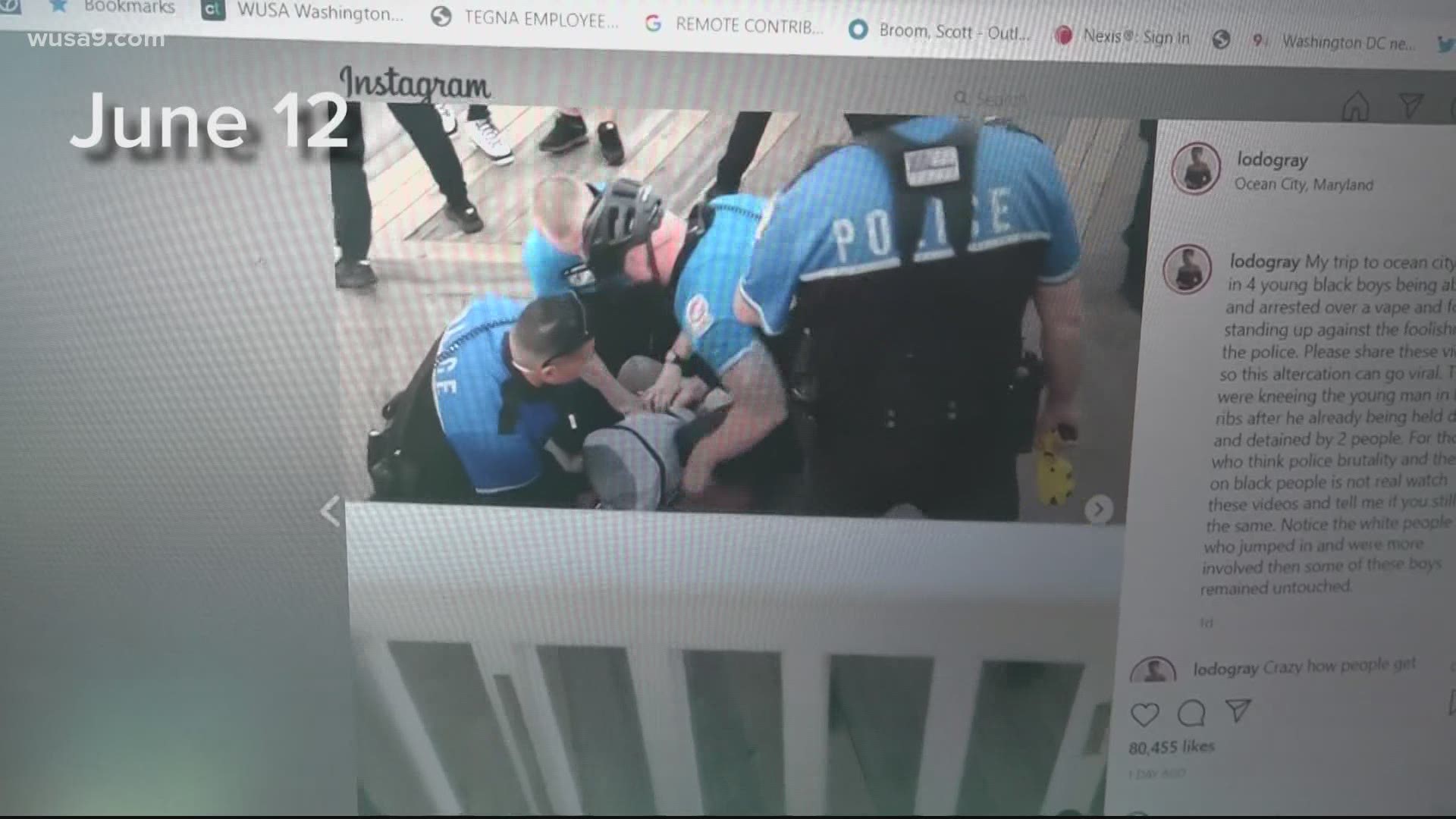 OCEAN CITY, Md. — Maryland Attorney General Brian Frosh said Monday he was "concerned" over a viral video showing Ocean City Police officers forcibly arresting several Black 18-and-19-year-olds on the Boardwalk – including one officer who repeatedly drove his knee into one of them.

According to the police department, around 8:30 p.m. on Saturday, officers were on foot patrol in the area of 12th Street and the Boardwalk when they saw a large group vaping. Officers reportedly approached the group and told them about the city ordinance prohibiting smoking and vaping outside designated areas.

Police say as the group walked away, the officers saw one of the group vaping again. The department claims the interaction then escalated because one of the men refused to provide identification and "became disorderly."

That man was later identified as 19-year-old Brian Everett Anderson, of Harrisburg, Pennsylvania. Officers attempted to arrest Anderson and police said he resisted arrest. He was charged with disorderly conduct, resisting arrest, second-degree assault and failure to provide proof of identity.

A video posted to Instagram by the user "lodogray" appears to show six Ocean City Police officers attempting to arrest a young Black man who is lying on the ground. During the video, one of the officers proceeds to repeatedly drive his knee into the man while yelling, "Give me your hands!" – prompting outcry from the crowd. At other points in the video the man can be heard saying, "I'm not resisting!" and asking police to tell him why he was being arrested.

Police said officers attempted to set up a perimeter around the arrest when the crowd on the Boardwalk became "hostile." At that point, police said, 18-year-old Jahtique Joseph John Lewis pushed an officer in the chest and swore at the officer before picking up a police bike and attempting to hit an officer. That incident appears to be captured at the end of one of the videos of the initial arrest.

A second video posted to Twitter appears to show police brawling with other men before tackling them to the ground. In one case an officer deploys a Taser. The men are then handcuffed and walked away from the area.

this video was sent to me by a woman named lauryn (insta @/lodogray) of four young men being arrested and abused by police in ocean city, maryland over a vape.

A third man, 19-year-old Kamere Anthony Day, also of Harrisburg, was also placed under arrest for disorderly conduct and resisted arrest. He was seen by a commissioner and released.

Lewis was eventually placed under arrest and charged with disorderly conduct, resisting arrest and other crimes. He was also released on his own recognizance.

A fourth arrest was made when, police said, an officer observed 19-year-old Khalil Dwayne Warren standing on private property next to two "no trespassing" signs. When officers told Warren to leave, he reportedly became "disorderly." He was arrested and charged with trespassing, and resisting arrest.

On Monday, the Ocean City Police department released a statement saying they were aware of the reaction to the videos circulating online:

"We understand the public's concern over the video circulating of the disorderly crowd, which is currently being investigated by the Office of Professional. While the use of force is never the intended outcome, our police department's first priority is to protect and serve. They do not target based on race or age. They are focused only on keeping our residents and visitors safe by enforcing the law, and diffusing situations as quickly as possible while maintaining control over the environment."

In a separate release, the department said officers are "permitted to use force, per their training, to overcome exhibited resistance."

Also Monday, Maryland Attorney General Brian Frosh said he was "deeply concerned" over what he saw in the video and had communicated that to the Ocean City Police Department.

Based upon this video and another I have seen, I am deeply concerned about this incident. I have shared that concern with the appropriate law enforcement agencies. https://t.co/T0Nm58NOdK

Ocean City Police said the use-of-force from these arrests will go through a multi-level examination by the assistant patrol commander, the division commander and the Office of Professional Standards.

Police said a third video that began circulating on Twitter following the posting of the other two was actually from a separate incident on June 6 and involved an adult suspect currently charged with second-degree assault and carrying a concealed deadly weapon.

Ocean City Police elaborated about the June 6 incident on Monday in a Twitter post saying that the 18-year-old began yelling at officers and threatening to kill them. The department said that this is when officers drew their Conducted Electrical Weapons (CEW), adding that the teen resisted arrest.

Police also said the 18-year-old spit on officers and was found to have a switchblade in a backpack he was carrying after being arrested.

The 18-year-old was seen by a court commissioner and released on his own recognizance. He was held on bond in the amount of $3,000.