2 people are claiming Lt. Governor John Fetterman didn't have a right to block them, despite what was said regarding a picture of his wife 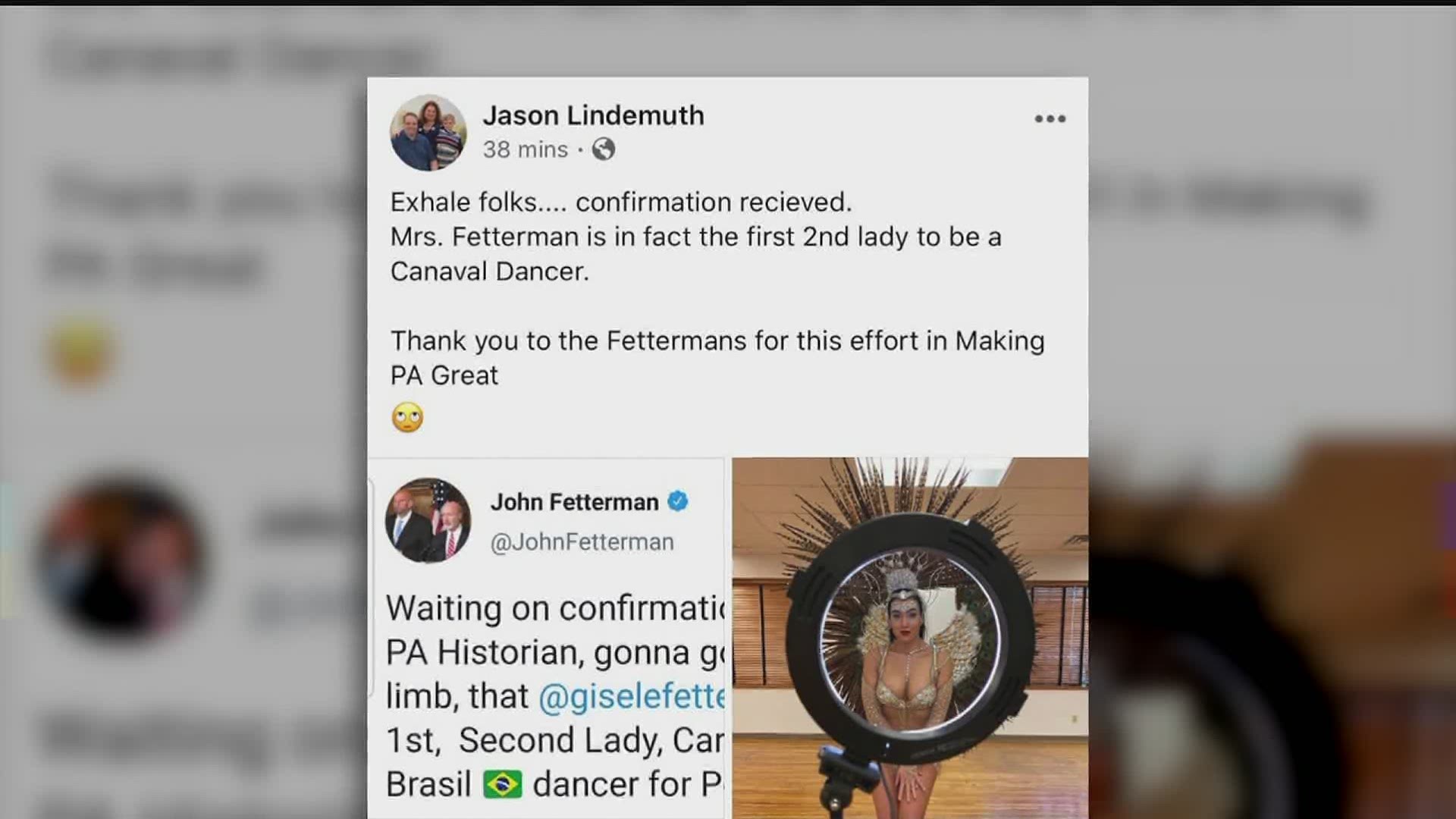 Lt. Governor John Fetterman has until Friday to respond to two individuals who are demanding that he unblock them from his personal Twitter account and issue an apology. But Fetterman said, it's simple: his family is off limits and hate speech will not be welcomed on his personal account.

Attorney Marc Scaringi issued a letter to Fetterman's Harrisburg office threatening legal action on behalf of his clients Sean Guay (@sguay09 on Twitter) of Hummelstown and Jason Lindemuth (J_therepublican on Twitter) of Harrisburg.

The dispute began when Jason Lindemuth commented on a photo the Lt. Governor posted of his wife, Second Lady of Pennsylvania Gisele Fetterman, in a Carnaval do Brasil outfit. Gisele Fetterman is a native of Brazil.

Lindemuth's comment read: "Exhale folks. Confirmation received. Mrs. Fetterman is in fact the first 2nd lady to be a Carnaval dancer. Thank you to the Fettermans for this effort in making PA great." The tweet ended with a face emoji with rolling eyes.

"I tweeted out a picture of my wife in her traditional carnaval outfit and one of the gentleman proactively tagged my wife on social media and then demeaned her and claimed that she wasn't making Pennsylvania great whatever that means," said Fetterman. "I believe as I've always maintained that, you know, I think your family should be off limits."

Gisele Fetterman responded as well with a tweet that read "stop trying to shame women."

Fetterman added, the post was strictly a picture of his wife. He wasn't talking about a policy or politics.

However, Marc Scaringi, lawyer for Jason Lindemuth claims Lindemuth was not "shaming or body shaming the second lady." He said, the indication that Lindemuth shamed her has harmed his reputation and is defamation of character. John Fetterman said in response, neither he or his wife have used the term 'body shaming.'

"The other gentleman inserted a link from one of the posts from one of his extremists blogs that was very islamaphobic and dog whistling," said Fetterman.

The Lt. Governor has both a personal and government Twitter account. Fetterman admits, he has blocked other people on his personal account outside the two people in question. But, he said all of them have violated his two rules for the page which include: don't come after his family and don't spread hate speech. He also added, to maintain separation, he alone maintains his personal account on his personal cell phone and state staff doesn't even have the password. He adds, no tax dollars are used to maintain the personal page and he started the page years before he was Lieutenant Governor.

"This is a pretty straight forward simple matter from our standpoint," said Marc Scaringi, lawyer for the two men who were blocked. "We believe we have solid law in our favor and it's an easy simple resolution to this legal dilemma. Just unblock your, unblock my two clients from your twitter account and then there will be no lawsuit."

The legal letter also cites similar cases brought against other public officials such as President Donald Trump and US Congresswoman Alexandria Ocasio-Cortez who have faced legal issues as well for blocking people on Twitter.

Fetterman said he does not have a planned response at this time to the legal threat but he called it a "nusiance lawsuit" and a "publicity stunt."

If Fetterman doesn't respond by Friday, Scaringi said his clients will then decide if they will move forward with the lawsuit. At this time, it is unclear if that lawsuit would be filed against Fetterman or the state.