Chief Jarrad Berkihiser says the officer is on administrative leave and will not be identified out of concern for safety. The Chief says the department is 'fatigued. 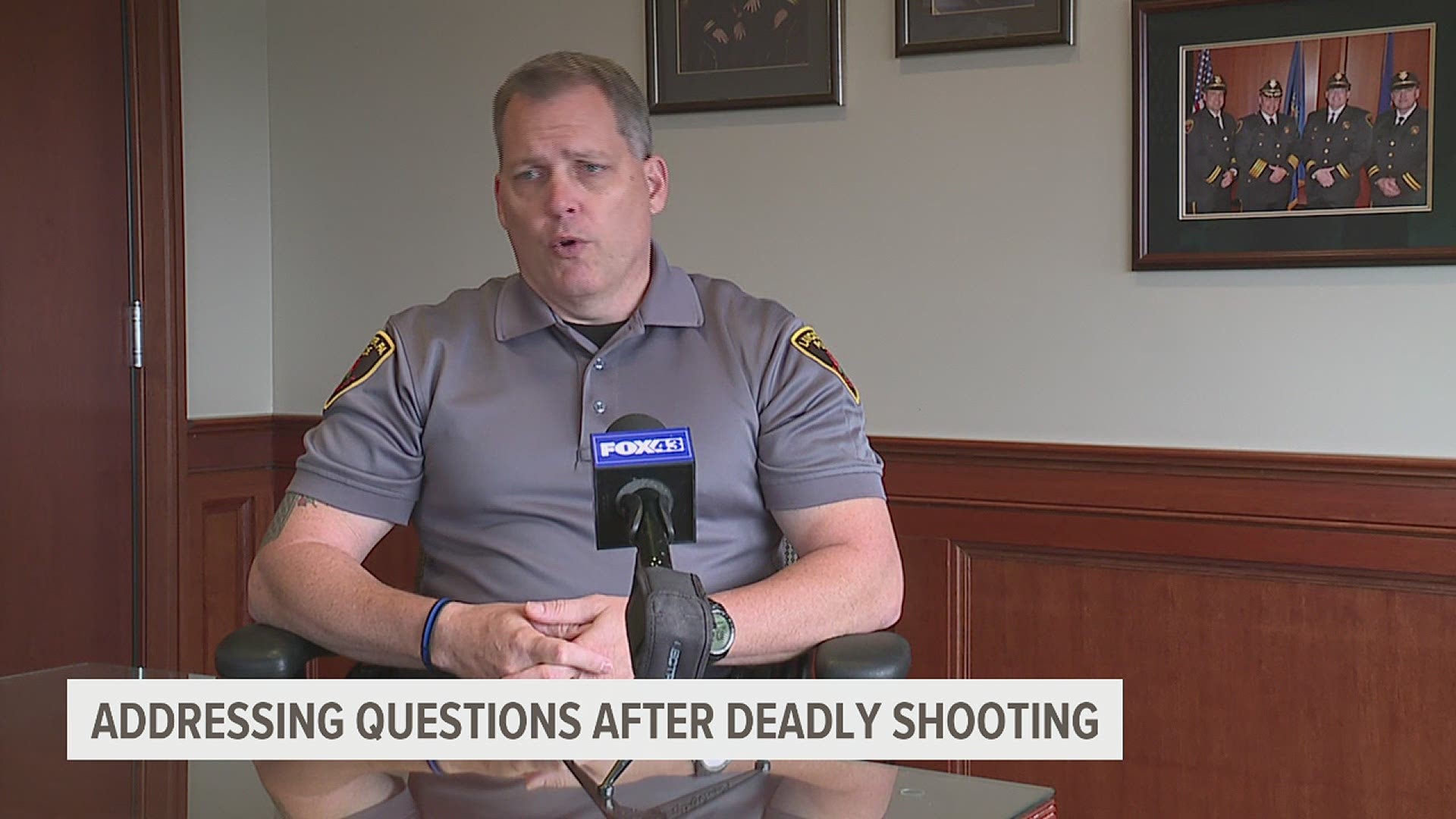 LANCASTER, Pa. — "Everybody is kind of exhausted to a certain degree. Fatigued because the last few days have been long days, long shifts, because we're concerned about our safety," said Lancaster Police Chief Jarrad Berkihiser during a one-on-one interview Thursday afternoon.

Chief Berkihiser says the police station and the people who work inside of it have become the target of violence and threats. He says they are concerned for their safety four days after an officer shot and killed 27-year-old Ricardo Munoz, who as body cam footage shows, charged at the officer while holding a knife.

"We had to move out to clear people from trying to take over our police station five different times," explained Berkihiser. "Each time we did that, we used tear gas and/or pepper spray."

Berkihiser says people threw bottles and bricks at the building on Chestnut Street, broke windows of police vehicles and keyed police cruisers, and they also tried to harm uniformed officers. The violence led to 13 arrests, including a minor.

"Thankfully, they [officers] were all wearing helmets that were hit in the head with rocks, bottles, bricks, and batteries," explained the Chief. "We had fireworks launched at us."

The officer involved in the incident that prompted the riots is on administrative leave while the shooting is investigated by the Lancaster County District Attorney's Office.

"He is dealing with the gravity of the situation, because like I have said time and time again, we don't get up in the morning or late afternoon to work our shift with the idea we want to hurt somebody, shoot somebody or kill somebody," commented Chief Berkihiser. "That's not how we operate as police officers. We're guardians. We're peacekeepers."

He will have to undergo a psychological fitness for duty examination before he can come back to work, and he's currently receiving counseling.

Chief Berkihiser says his identity will not be released which is standard practice after what the chief calls critical incidents.

"I realize it's controversial, but we have to look out for that person's safety, that officer's safety, and the safety of family," explained Berkihiser. "We signed up for this as officers. We may have to sacrifice our safety, but our families did not sign up for that."

The chief says he hopes for healing for the community.

"In order to move forward, the threats and the rhetoric have to stop. That's really it," said the Chief.

The chief also addressed many of the questions people have surrounding Sunday's deadly shooting.

"From your perspective - could anything have changed that day?" asked FOX43's Grace Griffaton.

"Based on what we know, I don't think so," said Chief Berkihiser.

What if a social worker had arrived with the officer who shot Munoz? What if the officer used his taser instead? What about calling for an ambulance to stage outside the home?

"Quite frankly, EMS is not going to go into a scene, where someone is acting violently, because they are not trained to handle that," said the Chief.

During our interview, the chief also addressed the rumor that police never called for one after the officer fired his weapon.

"That's absolutely not true. We called for an ambulance right away," said Berkihiser.

The chief says the city's fire department responded before the ambulance as they were only a block from the scene.

"If a taser is ineffective, which sometimes they are, if it misses, the officer is getting stabbed," explained Chief Berkihiser. "It goes a long the same lines of why didn't we shoot him in the legs, arms, or hands..... First of all, there is no guarantee if we shoot him in the arm or leg it's not going to be a fatal shot to begin with because you have the brachial arteries in the arms, the arteries in the legs, and we have homicides where people died because of blood loss in those areas."

According to some studies, tasers can be unreliable with multiple reports indicating differing rates of success.

The chief says time and distance allows officers to think about their next move; he says the officer did not have much of either during the incident.

"When it's a lethal threat, unfortunately, we have to react with lethal force, and unfortunately, it's tragic for everyone involved," said the chief.

A timeline as to when the District Attorney's findings will be released has not been disclosed. The chief says it could take a few weeks or months as it has with past officer-involved shootings.