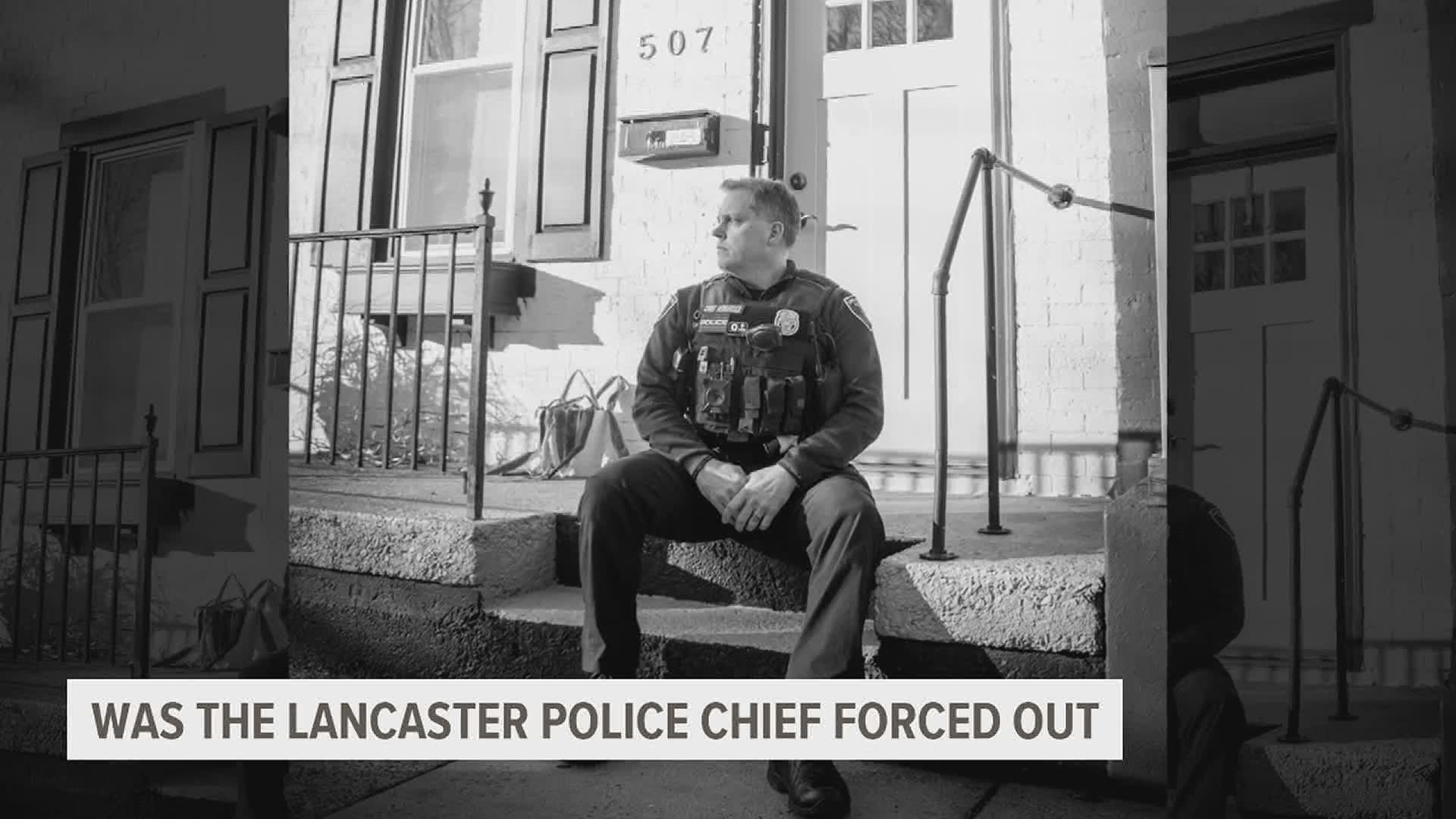 LANCASTER COUNTY, Pa. — The Lancaster mayor responded Saturday to allegations on whether she pressured the chief of police to retire over his wife's pro-Trump Facebook comments.

Mayor Danene Sorace announced the sudden retirement of Police Chief Jarrad Berkihiser at City Hall on Oct. 2 after 26 years with the Lancaster Bureau of Police.

"There is an agreement that legally binds Chief Berkihiser and me to not comment on the nature of the discussions we had, nor on the factors that led to his decision to retire," Sorace said in a statement. "It is my obligation to abide by the letter of the law in not breaching that document.

Fiorill said, "Lancaster County Red Rose Lodge 16 took this battle because it was an injustice not only to Jarrad Berkihisher, but to every policeman that might be subject to the same treatment."

He says Berkihiser was put in a situation to either retire or be fired.

"When you're asked to resign or you're going to be terminated, you have to have just cause. Where is the just cause? That's why the FOP is involved with this. There was no just cause for this?"

He made the statement that he was asked for his resignation and it was inferred to me that it was based on that post on Facebook."

She commented on a post about president trump visiting Pennsylvania last month writing "That's why I'm voting for him again. Same reason as last time. You don't see him meeting with Jacob Blake's family and speaking to him by phone."

RELATED: Lancaster DA: Final determination on Sept. 13 officer-involved shooting will be issued 'in the near future'

The police chief's wife, Kristy Berkihiser explained her since-deleted Facebook in a post she has now made public. She said read an article about a presidential candidate visiting a victim's family after a critical incident where all of the facts were still being investigated and was 'sickened that they were used so a politician could pander for votes'.

"What I find most hurtful is the assumption that my opinions are my husband's and somehow make him less truthful. We have been married 30 years because he has never tried to control my thoughts, opinions, or politics," Berkihiser's wife said in the Facebook post.

The post ended with her writing, "I'm sorry my comment was hurtful and taken far out of context and regret that deeply but my husband deserves better than to be judged by it."

The Lancaster's Mayor's Office will not confirm or deny that Kristy's Facebook post is the reason for Chief Berkihiser's retirement.

In a statement to FOX43, Mayor Danene Sorace wrote "There is an agreement that legally binds Chief Berkihiser and me to not comment on the nature of the discussions we had, nor on the factors that led to his decision to retire. It is my obligation to abide by the letter of the law in not breaching that document. I also feel morally and ethically bound to the spirit of the agreement. It is my duty as Mayor to honor this agreement and I will do so."

The statement went on to say:

Now that we are in a position to find a new Chief to lead the Lancaster City Bureau of Police, I am only looking forward, firm in my commitment to ensure that we emerge stronger and more united as a community. I am also unwavering in my commitment to the bureau itself — ensuring that they have a leader committed to their ongoing success in every facet of policing.

This week, the search will begin. I will be sharing a process for conducting the search for a new Chief for feedback and refinement. There will be continuous opportunity for key stakeholder input along the way as we work to develop a search plan and identify the characteristics of the next Chief of Police.

As for the characteristics of the next Chief, let me begin with sharing some of my priorities. He or she, in addition to exemplary law enforcement experience, must possess:

-An unwavering commitment to transparency and accountability

-A demonstrable ability to build and sustain public trust

-An ability to develop and implement shared goals in the areas of community relations, training, leadership development and recruitment, as well as best practices within policing

-An unquestionable commitment to diversity, equity, and inclusion.

In the meantime, I am also exploring the possibility of an interim chief to provide leadership and support to members of the Police Bureau as this process will certainly take several months.

I look forward to continuing to provide updates regarding the work underway.

FOX43 has sent a right to know request to Lancaster City for the separation agreement between Berkihiser and the City.