Lancaster City Police horse retires after 18 years on the job

Mount Duke will live out his golden years on a private farm after serving with Lancaster City Police Department's Mounted Unit for nearly two decades. 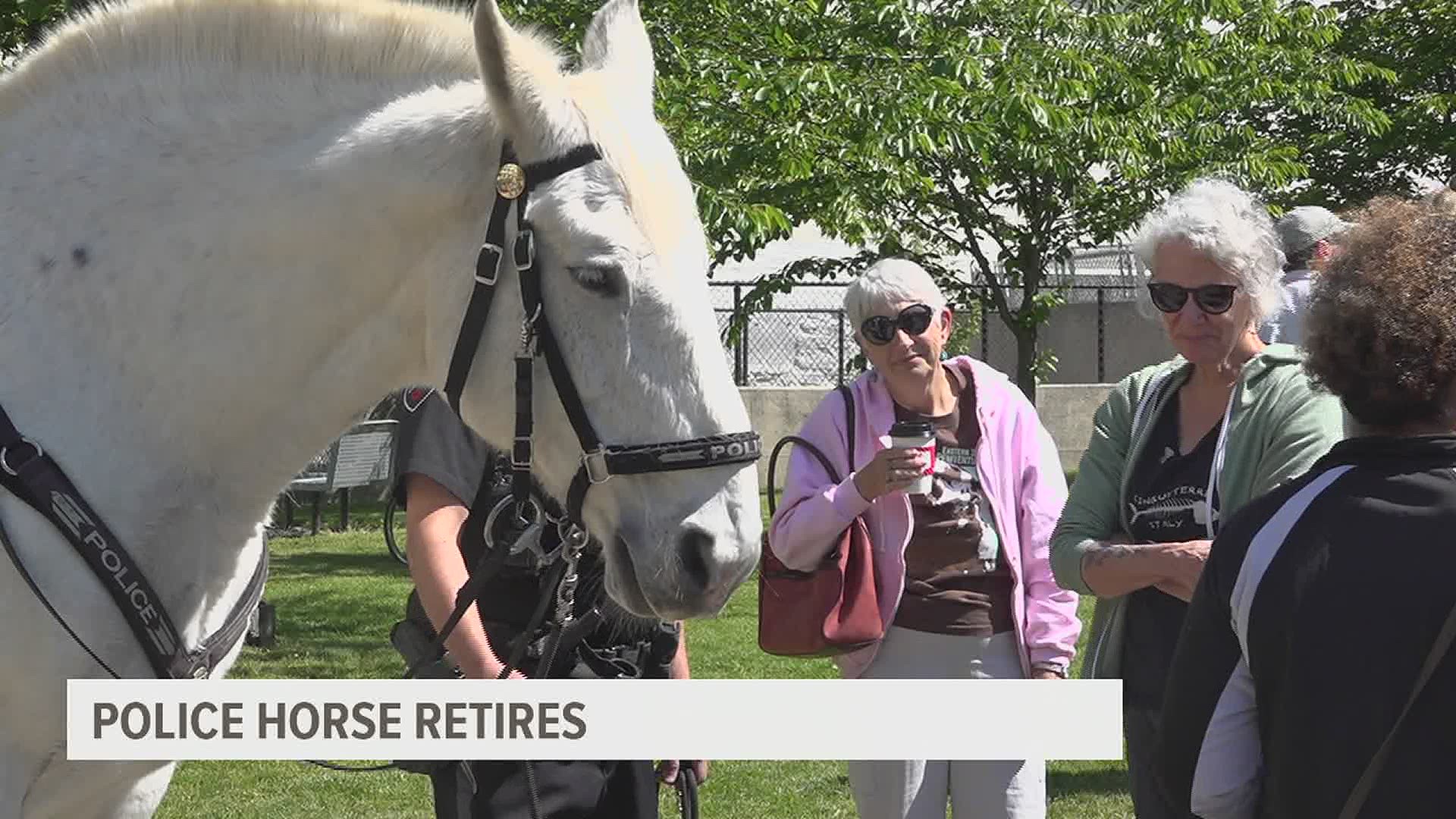 LANCASTER, Pa. — A Lancaster City Police horse is hanging up his saddle after nearly two decades on the job. In his place, two new horses are joining the force and they have some big hooves to fill.

Duke, a 22-year-old Percheron, is a unique, but important veteran of the Lancaster City Police Department. His days on the job are coming to an end and the Mounted Patrol officer is retiring after 18 years on the force.

“There are people crying saying goodbye to Duke, and you know what, that makes us feel good that we had a horse of that quality that drew so much love and attention to not only himself, but also his officers as well,” said Sgt. Michael Gerace.

Mounted Patrol Units are often seen in parades or at events, but these animals do so much more than that. They train with officers and are an integral part of the department.

Over the years, Duke attended countless special events in the city of Lancaster and has been a part of protection details for many politicians and world leaders. In 2009, Duke traveled to Pittsburgh to assist during the G20 summit. He also was part of a protection detail for Pope Francis’s visit to Philadelphia in 2015.

“He is certainly going to be missed and a difficult void to fill,” Sgt. Gerace added.

Now, it’s Duke’s moment to relax after a job well done. He is retiring as the longest serving police animal in the department’s history and will live out his golden years on a private farm.

The department now welcomes two new recruits to their Mounted Unit, King and Jake. Both horses are 8-year-old Percherons.

King's first official duty came on June 24th, 2020 when Lancaster City Police were called to assist in the search for missing Amish woman, Linda Stoltzfoos, who disappeared while walking home from church a few days prior. Over a course of 10 hours, the Mounted Unit covered approximately 250 acres of farm fields and walked approximately 15 miles.

Last week, Jake performed his first official duty by representing the City of Lancaster at the Delaware County Police Memorial where Lt. Elwood Gainor, the only Lancaster City police officer killed in the line of duty, was remembered, along with numerous other officers who died in the line of duty.  Jake will begin patrolling downtown this month.

RELATED: Duke, the longest-serving member of the Lancaster Mounted Police Unit, is retiring after 18 years

RELATED: A timeline of events in Linda Stoltzfoos' disappearance and the arrest of Justo Smoker