What is happening with the PPE stockpile at PA Farm Show Complex?

Why is it there? How much PPE has been sent? Where will it go next? FOX43 received your questions and has answers from PEMA & the Dept. of Agriculture. 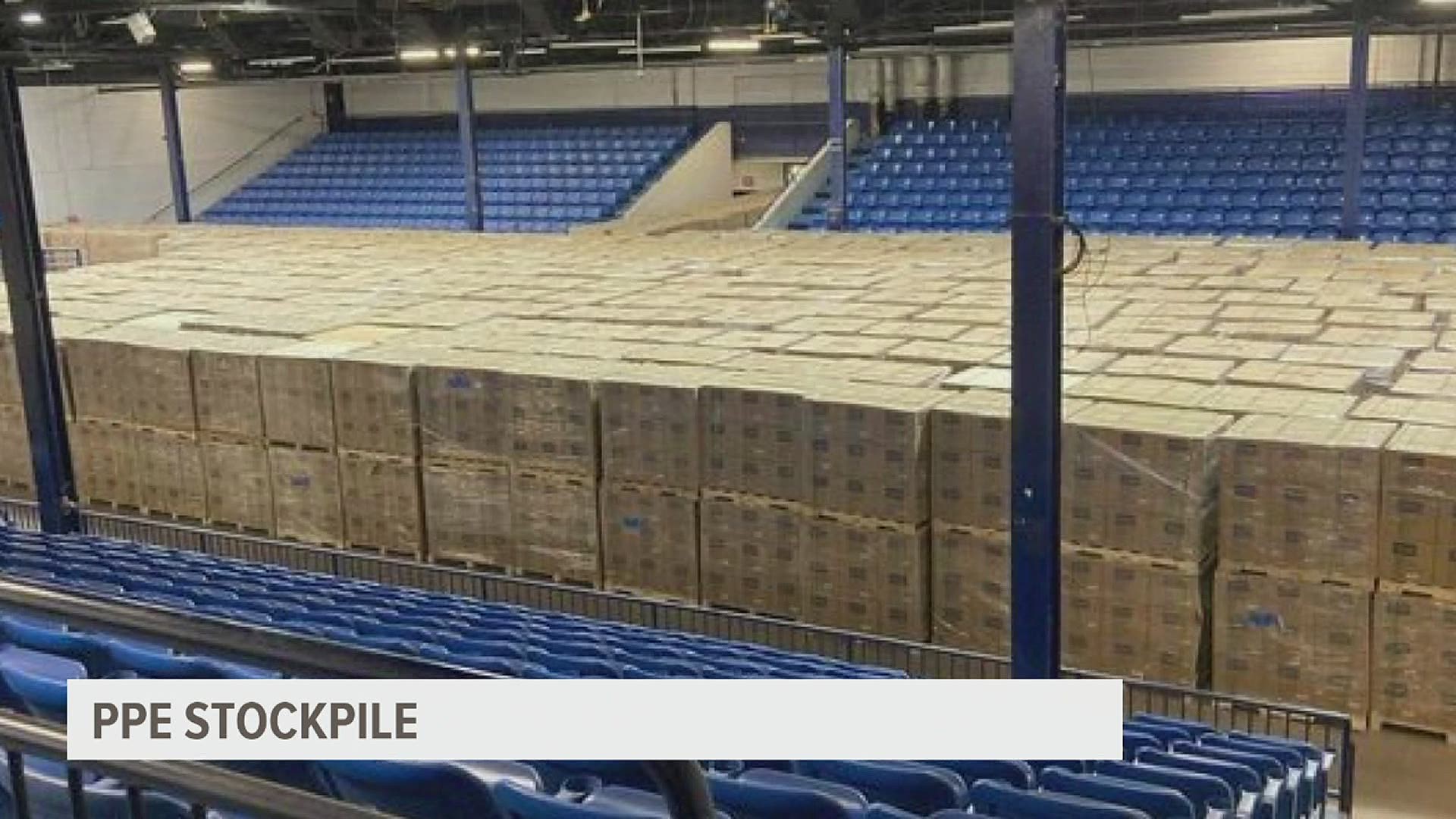 HARRISBURG, Pa. — Senator Doug Mastriano (R-Adams County) says he was denied access to inspect what he calls a huge stockpile of personal protective equipment or PPE in Dauphin County.

Sen. Mastriano's office sent FOX43 an email on the PPE stockpile which reads, "On March 17th, I was denied access to tour the facility. To this day, neither myself nor the media have been granted access. The public deserves to know how taxpayer dollars are being used and if there are any transparency issues.”

Ruth Miller, a spokeswoman for PEMA, says the PPE is being kept at the PA Farm Show Complex in Harrisburg as it's a secure, centralized location.

Sen. Mastriano's office is also questioning if the stockpile has prevented the complex from hosting in-person events, such as the PA Farm Show.

The email goes on to state, "Shortages of PPE have been a big issue here in Pennsylvania throughout the pandemic. This includes places such as nursing homes where we are supposed to protect the most vulnerable. It is concerning that we had this stockpile in the facility for months with a lackluster distribution strategy. Furthermore, it is puzzling to understand why the farm expo facility was chosen to store all of this PPE. This building is a crown jewel for Central Pennsylvania and its events are a major economic driver for our state. This year’s farm show was entirely virtual because of 'Covid concerns.' I’d like to know if an in-person farm show would have been possible this year had there been enough space in the building in January."

Miller states the commonwealth has fulfilled every request submitted for PPE, and there are no unmet requests at this time. Officials, including state lawmakers and other local leaders, say they're trying to figure out the next best location for the large quantity of PPE.

You can see in the PPE in the above viewer photo provided to FOX43.

"Now, that the farm show and the tourism groups want to anxiously open up to get events there, we're looking for a place for all of the supplies," said Rep. Patty Kim (D-Dauphin County).

Currently, Miller says PPE is being shipped out as needed to support vaccination sites across the state.

Miller tells FOX43 a long-term plan for a sustainable PPE stockpile is under development, and one of the key factors will be funding that will allow the commonwealth to secure a warehouse for the future PPE stockpile. Once funding is secured (which will likely be both state and federal funding), a warehouse facility can be secured and the assets moved.

Shannon Powers, a spokesperson for the PA Dept. Of Agriculture, sent FOX43 an email explaining how PA acquired the stockpile. Powers says Governor Wolf's Administration used the summer months to prepare for a fall COVID-19 resurgence. Powers says they acquired a stockpile to assist healthcare facilities which were unable to get PPE through their normal supply chains. At this time, Powers says costs related to maintaining the PPE are being covered by the State and are reimbursable by Federal disaster relief funds.

She says the PPE is pushed to those who need it and request it. It will also be kept for a future public health emergency.

According to Powers, facilities are first required to attempt to procure PPE through their own supply chain. In the event that PPE such as masks, gowns, face shields, gloves or hand sanitizer is unable to be procured, a resource request would be submitted for review, and if appropriate, PEMA and the Department of Health collaborate to deliver the requested supplies. The commonwealth stockpile is used in the event that other suppliers do not have the necessary items and all other potential sources have been exhausted.

To date, Powers say the state has pushed out close to 6.3 million N95 masks, more than 1.2 million gowns, more than 3.5 procedure masks, close to 16.7 million gloves, more than 1.5 million face shields, and close to 1.4 million bottles of hand sanitizer from the stockpile.