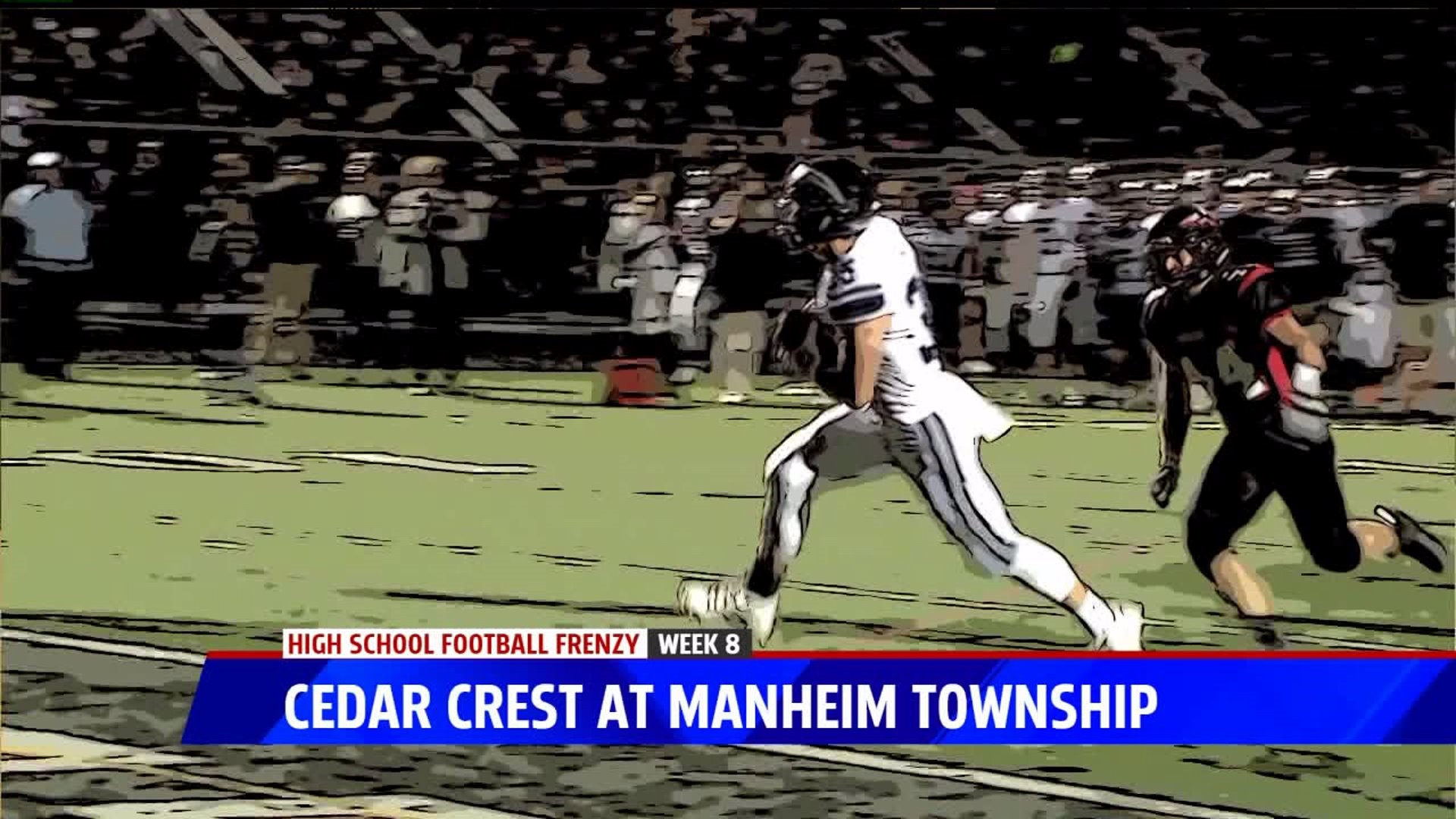 The host Panthers are alone at the top of the YAIAA Division I heap, with Northeastern and York tied in second. Central York won its fifth straight game last Friday with a 52-0 drubbing of Spring Grove. The Panthers' only loss came back in Week 2, when they fell 13-12 to Cumberland Valley in the Frenzy Game of the Week. They survived a 30-28 nail-biter with Hempfield one week later, then went on a tear over the last month, beating their four opponents by a combined margin of 200-21. QB Beau Pribula (26-54, 386 yards, three TDs) and RB Imeire Maginault (49-501, 10 TDs) carry the Panther offense.

The Bobcats suffered their first loss of the season two weeks ago at Red Lion, but rebounded with a 49-10 rout of South Western last Friday. Northeastern RB Manny Capo is the league's top rusher, with 1,238 yards and 14 touchdowns on 167 carries. QB Zech Sanderson is one of six York-Adams quarterbacks to break the 1,000-yard plateau this season; he's completed 68 of 152 passes for 1,089 yards and 14 scores. Sanderson's top target, wideout Jordan Lagana, is second in the league in both receptions (31) and receiving yardage (585). He's also racked up 10 TD catches. Northeastern has the league's top offense, averaging 457 yards per game.

Central York is currently ranked fifth in the District 3 Class 6A power rankings; the top eight teams get in. The Panthers are trying to move into one of the top four spots, which would earn them home-field advantage in the first round.

Northeastern is currently No. 2 in the Class 5A rankings. The top 14 teams make the playoffs there.

The host Blue Streaks grabbed sole possession of first place in Section 1 of the Lancaster-Lebanon League with last week's 28-7 victory over Warwick -- a game that was witnessed by Penn State coach James Franklin, who was in town on a recruiting trip, and most of the Lititz-Neffsville area. But to keep their perch at the top of the section, the Streaks will have to dispatch Cedar Crest, which is lurking a half-game behind. Township leads the L-L League in total offense (420 yards per game), scoring offense (41.1 points per game), total defense (157 yards per game) and scoring defense (7.9 points per game). QB Harrison Kirk is fourth in the league in passing yards (1,442 on 91-of-147 passing) and is third in passing TDs (14). Jaden Floyd is the league's fouth-ranked rusher, with 736 yards and eight scores.

Cedar Crest's only loss of the season is a 34-14 setback against Warwick in Week 6. The Falcons rebounded with a 37-10 victory over Penn Manor last week. Running back Tyler Cruz is the L-L League's second-leading rusher at 1,018 yards -- just eight yards behind leader Nick Yannutz of Solanco. Cruz's 14 rushing touchdowns also rank second among league rushers. Meanwhile, quarterback Chris Danz has completed 71 of 125 passes for 1,286 yards and 13 scores. His top target is wideout Cole Miller, who has hauled in 30 catches for 529 yards and six TDs. Cedar Crest averages 349 yards per game on offense, while the Falcon defense yields 273.8 yards per game.

Friday's result could have a huge effect on the Class 6A playoff field in Districts. Township is currently the top seed, while Cedar Crest is No. 4. The Streaks are hoping to win their last three games to ensure they get home games throughout the playoffs (including the finals, since the title game is no longer played at Hersheypark Stadium).

The host Little Lions and the Rams are deadlocked at the top of the Mid-Penn Commonwealth standings. State College knocked off Harrisburg 21-6 last week to earn its seventh straight victory. The Lions are the top-ranked team in District 6 and is ranked fifth in the state in Class 6A by Pennlive. Quarterback Brady Dorner has completed 64 of 93 passes for 1,018 yards, six touchdowns and two interceptions. RB Dresyn Green leads the team with 656 yards and 10 TDs on 102 carries, while dual threat Isaiah Edwards has 299 rushing yards and 302 yards and four TDs on 18 catches.

CD got off to a 1-2 start, falling to Wilson (21-13) and Manheim Township (10-7) early in the season, but the Rams have reeled off four straight wins since then, including a 62-0 rout of Altoona last week. RB Timmy Smith leads CD with 468 yards and four scores on 72 carries, while QB Max Mosey has completed 67 of 107 passes for 856 yards and five scores this season. His top target, Nick Chimienti, has caught 25 passes for 497 yards -- an average of 19.9 yards per catch -- and has scored four times.

The Rams are ranked third in the District 3 Class 6A power rankings, trailing Township and Wilson.

The Tri-Valley League title picture will come into focus over the next two weeks, as Upper Dauphin faces its top two contenders in back-to-back confrontations, starting Friday when the Trojans journey to Tower City in Schuylkill County to take on the host Vikings, who are tied for second place with Pine Grove, one game behind UD in the standings. Should UD prevail on Friday, the Trojans could basically clinch the crown by defeating Pine Grove in Week 9, with only a struggling Millersburg team standing in their way in the regular-season finale. Millersburg might not even be fielding a team by then; they're forfeiting this week's game

Williams Valley's loss to Pine Grove snapped a six-game winning streak. The Vikings are led by quarterback Bryce Herb, who has completed 82 of 155 pass attempts, for 1,522 yards and 23 touchdowns. Running back Brady Miller has 975 yards and eight scores on 141 carries, while Bo Raho and Jesse Engle have combined for 47 catches, 919 yards and 18 scores.

Upper Dauphin counters with an attack paced by quarterback Macklin Ayers, who has thrown for 645 yards and three touchdowns and leads the team in rushing, with 1,160 yards and 21 scores on 92 attempts. Senior Jake Ramberger is close to becoming the Trojans' second thousand-yard rusher; he's got 905 yards and 12 scores on 71 carries.