"The amount of carbon in the atmosphere has been going up and down at the speed of a tortoise," Dr. Strauss said. "The change in the last 100 years...it's a bullet." 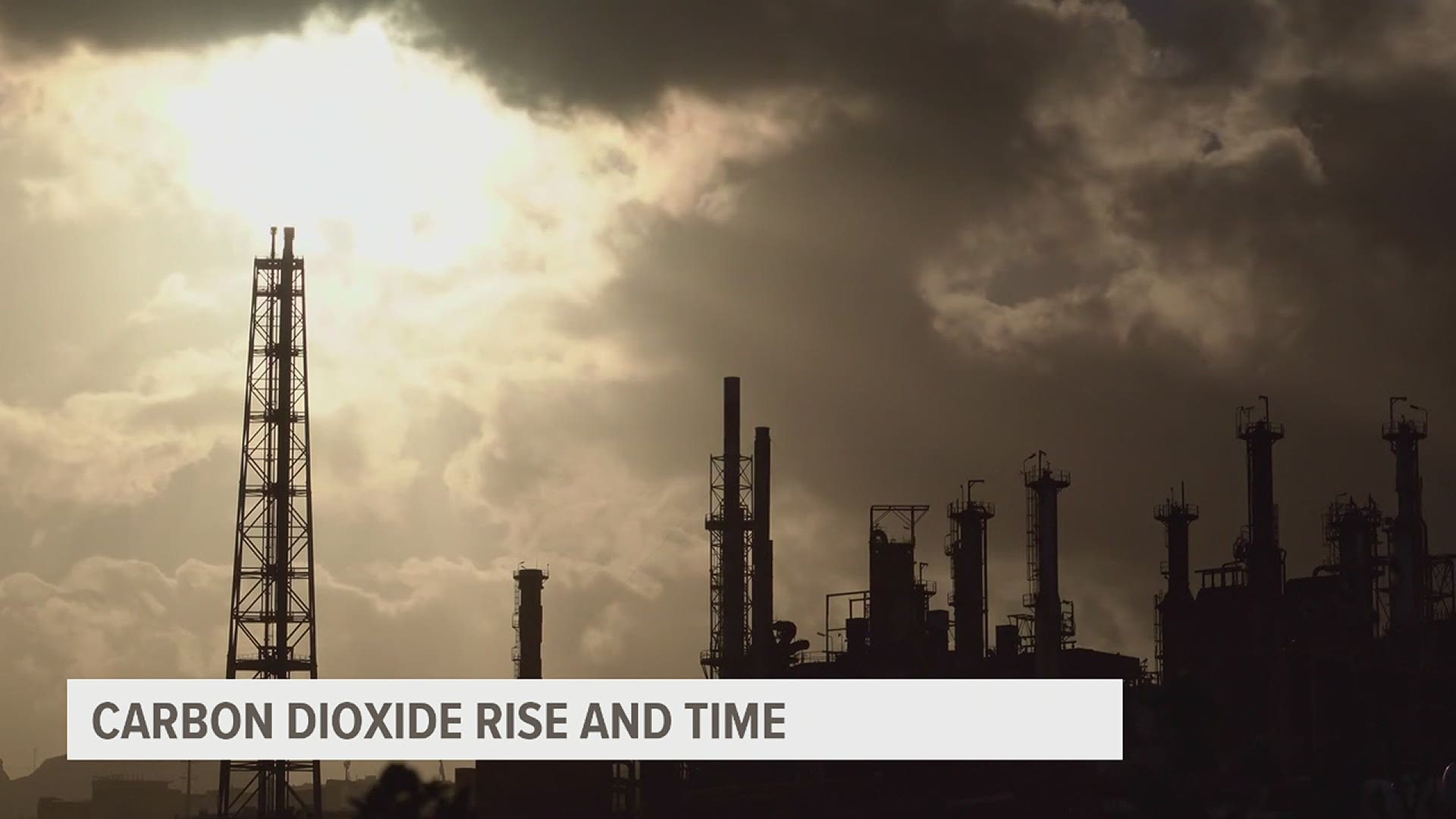 At more than 420 parts per million (ppm) in May, scientists measured the highest levels of carbon in the atmosphere since they started taking direct measurements 63 years ago at Hawaii's Mauna Loa Observatory.

But they say that fact goes back more than 800,000 years. But it's not just the level they're worried about. Perhaps even more, they're simply worried at how quickly it's happened.

Dr. Benjamin Strauss helped develop what he calls the Carbon Skyscraper. He took a commonly accepted graph of carbon in the atmosphere at 60,000 years, which painted a stark picture of human-induced carbon activity in and of itself.

Credit: Climate Central
This is the 60,000 year graphic for atmospheric carbon dioxide.

But then, with the help of 800,000 year old Antarctic ice, created a new graphic that shows the classic "seesaw" pattern of carbon rising and falling over the past 60,000 years still pales in comparison to what post Industrial Revolution society has on an even larger timespan.

Credit: Climate Central
This is the overall number of carbon dioxide ppm measured/estimated over 800,000 years.

"The amount of carbon in the atmosphere, century to century, one thousand years to the next, has been going up and down at the speed of a tortoise. The change in the last 100 years, it's not even a hare, it's a bullet," Dr. Strauss said.

But to better understand what this graph means, you need to understand how it was collected. Dr. Matthew Lachniet is a paleoclimatologist from the University of Nevada.

That big word--paleoclimatology, just means a study of climate in the past.

"It [Antarctic ice] puts down layers every year. It starts off as snow. Within that snow is air. As that snow starts to compact, those air pockets turn to air bubbles as the snow turns to ice," Dr. Lachniet said.

Scientists drilled a mile deep to reach that 800,000 year old ice. For each era in between, they sliced out sheets of ice, melted it in an isolated chamber and analyzed how much carbon dioxide was trapped within the ice sheets.

While there was not necessarily a layer for every year, or even every decade, Dr. Lachniet  told FOX43 that normalizing that sort of data with a relatively small gap compared to say, 1,000 years, is a reasonable practice when examining an 800,000 year time frame.

"Those measurements are giving you a real snapshot of what was in the atmosphere at the time that was deposited thousands, hundreds of thousands of years ago," Dr. Lachniet  said.

And to Dr. Strauss, that snapshot of how human activity has changed the situation on Earth is devastatingly clear.

"There's no way to understand it except that this is what we've caused. It's the only possible explanation," Dr. Strauss said.

Here's the idea: the Carbon Skyscraper explains how much change there has been in carbon levels compared to the 1,000 year average. The higher the number, the bigger the change.

Credit: WPMT FOX43
This is how the Carbon Skyscraper was created.

The skyscraper shows obvious natural variability in the climate over time. It's warmed and cooled naturally. Imagine those little bumps and dips as toddlers.

"Some toddlers are taller and some are shorter, and then you have Shaq. The difference is obvious. That's us putting carbon in the atmosphere," Dr. Strauss said.

Earth has certainly had high carbon levels before, from creation to the volcanic eruptions, meteorite strikes and more. But it's the time element that frightens scientists. It's the large 100-year spike compared to the rest of the natural variability.

Credit: Climate Central
The natural variability in carbon is encircled above.

"Sure, the planet has had a lot of different climates than in the past. It's been warmer than today. We could return to a warmer climate and we could have alligators in Alaska again. Fine. That's a world that can be survived by lots of different creatures," Dr. Strauss said. "The key is how fast do you get there? If we get there in a blink, nothing is going to have the time to adapt. It means mass death of species and great strain for civilization in a way it never would if the change were gradual."

Those gradual changes were enough to swing us into ice ages and back again. It's that spike at the end that has scientists both concerned and uncertain.

The reason for the doubt? Carbon sits in the atmosphere. Its effects take time to hit. Simply put:

"The impacts we're seeing haven't caught up to how much carbon we've added to the atmosphere or how much we've warmed the planet," Dr. Strauss said.

And if you need a clearer picture: "If you dump a dump truck full of ice in the middle of field in summer, you know it's going to melt. But does it melt instantly? No. It takes time. What's happened so far is, we've already warmed the planet by a couple degrees. The ice didn't all melt in an instant. It's still melting. The sea is still rising. We haven't even seen the half of it yet," Dr. Strauss said.

It's not all bad news, though. While the atmosphere certainly is damaged, Dr. Strauss says we could recover.

"I think we could also change from a polluting economy to a clean economy much faster than most people tend to expect," Dr. Strauss said. "I think we can make huge change in a decade. I think we can be looking at a much different world in ten years. The iPhone gets introduced and the world is a totally different place ten years after that. Think of how quickly the internet became important to our lives - ten, twenty years and the whole way we do things can be very different. That's the speed of change you would need to avert the most dangerous risks of the climate system."

Remember, even if we stopped polluting immediately, we still have yet to feel the effects of what was put out ten years ago. The problem would just stop from becoming even worse down the line.

"Of course, it would be a lot better than the alternative. It's all about slowing down the speed of change and buying time so we can figure out the solutions that we need," Dr. Strauss said. "If it takes off, all bets are off."

Right now, we've warmed by about 1-2°C globally. Scientists believe we're well on our way to doubling that in the next 50 years. That's when sea levels for cities like Miami, Amsterdam and New Orleans become a concern, not to mention other weather effects as well. That's all a potential future.

Many scientists believe the United States re-joining the Paris Climate Agreement was a start back on the right path nationally. But Pennsylvania has a plan in place to reduce carbon output as well. You can expect more information on that later on in our Climate Smart series.

For more of my interview with Dr. Strauss, you can watch it here:

This story was compiled with data from Climate Central.