After both the defense and the prosecution rested their cases, the jury was dismissed until Monday morning, at which point they'll be sequestered for deliberation. 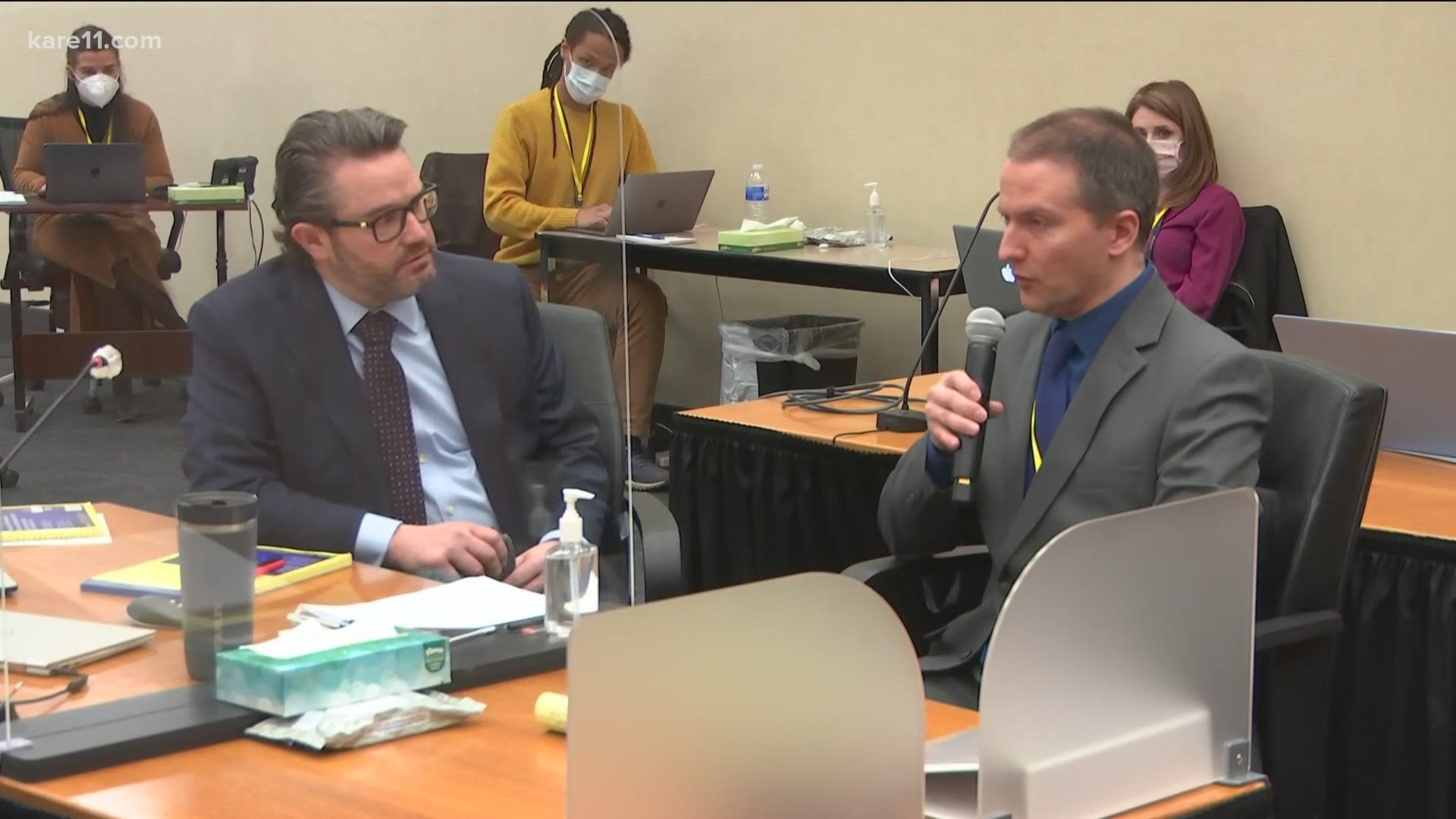 All testimony is complete for the murder trial of Derek Chauvin in the death of George Floyd, and the jury will hear closing arguments and begin deliberating on Monday.

Chauvin is charged with second-degree and third-degree murder, and second-degree manslaughter in the May 25, 2020 death of George Floyd. Bystander video and police body camera footage showed the former Minneapolis police officer kneeling on Floyd for nine minutes and 29 seconds.

Chauvin told Judge Peter Cahill Thursday morning that he has decided to invoke his Fifth Amendment right not to take the stand. "I have repeatedly advised you that this is your decision and your decision alone," defense attorney Eric Nelson said at one point.

Nelson rested his case before the jury as soon as they entered the courtroom Thursday. The state then called pulmonologist Dr. Martin Tobin back to the stand as a rebuttal witness in response to Wednesday's testimony from Dr. David Fowler.

Tobin challenged Fowler's assertion that carbon monoxide exposure was a contributing factor in Floyd's death, saying that because the autopsy showed an oxygen saturation of 98%, the highest possible level of carbon monoxide would have been 2%.

Judge Cahill told the jury to return for closing arguments Monday with a bag packed for sequestration and deliberation. He told the jurors the length of deliberation is up to them, but suggested they "plan for long and hope for short."

In the meantime, the judge and attorneys will work to finalize the instructions that will be given to the jury on Monday to help guide them toward a fair verdict.

DEREK CHAUVIN TRIAL: Derek Chauvin WILL NOT take the witness stand in his own defense.

Today could be the last day of testimony. The defense has one witness scheduled. https://t.co/Hl1xQgIFNw

The judge and attorneys gathered again Thursday afternoon to discuss the official court instructions that will be given to the jury before they begin to deliberate.

First, defense attorney Eric Nelson told the judge he wants to include language about the "totality of the circumstances" and not using hindsight when judging a police officer's use of force.

Nelson also said he wants to include an instruction explaining that Morries Hall invoked his Fifth Amendment right not to testify, since he mentioned Hall during his opening statement.

Prosecutors also asked the judge to remove language requiring the defendant's "intent to afflict bodily harm" to be guilty of third-degree assault. He said the charge only requires intent to apply force to a person without their consent, which then resulted in bodily harm.

Both the state and the defense have asked the judge for specific language around what it means to "cause" someone's death.

After hearing several other requests from both sides, Cahill said he will try to get the next draft of instructions to the attorneys Thursday night or Friday morning.

We are back with Derek Chauvin trial coverage at the moment. In chambers, the sides were talking about jury instructions, and now they are back on the record with what each side's objections to what the judge decided.

Judge Peter Cahill told the jury they'll be excused until Monday, at which time they should return for closing arguments with a bag packed for deliberation. Cahill said the length of that deliberation, during which the jurors will be sequestered, is up to them.

"Plan for long and hope for short," Cahill told them.

The state called pulmonologist Dr. Martin Tobin back to the stand Thursday as a rebuttal witness.

Judge Peter Cahill issued a stern warning before Tobin's testimony that he may not bring up new evidence about Floyd's blood gas tests. Cahill told the prosecution the evidence was being introduced too late, and could result in a mistrial.

Cahill will allow testimony concerning enlarged heart in response to studies cited by Dr. Fowler yesterday in his testimony.

Dr. Tobin testified that because the oxygen saturation in Floyd's blood was 98%, the maximum amount of carbon monoxide or carboxyhemoglobin would be 2%. Tobin said the normal rate is 0-3%.

Tobin's testimony was used to rebut Dr. Fowler's testimony that Floyd could have had increased carboxyhemoglobin up to 18%.

Tobin also testified that there are no studies showing that pressure on the neck narrows the hypophraynx because it is a widely known fact.

"That's not the kind of research that somebody would want to do," he said.

The prosecution asked the judge to admit new evidence of George Floyd's blood gas levels, after a witness called by the defense commented that he believed carbon monoxide exposure contributed to Floyd's death.

Nelson told the judge that it would be "incredibly prejudicial" to allow the state to introduce new evidence after Dr. Fowler finished testifying and left the state. He said the point Fowler was making was that the state didn't bother to test the blood gas.

Nelson said he will move for a mistrial if the state is allowed to introduce the evidence, since they had ample notice that the defense would bring up this point. The judge agreed that evidence can't be admitted, but said Dr. Martin Tobin can testify as a rebuttal witness on a narrow list of topics.

Nelson is arguing that the state has had more than sufficient notice that Fowler would opine CO played a role and should have been tested.

The state had time to rebut any suggestion.

Derek Chauvin and his defense attorney, Eric Nelson, told the judge Thursday morning that Chauvin will not take the stand in his own defense.

Chauvin at that point told the judge that he has decided to invoke his Fifth Amendment right not to testify.

Court on Wednesday began with a motion for acquittal from defense attorney Eric Nelson, who asked the judge to dismiss the charges against Chauvin because "the evidence is insufficient to sustain a conviction."

This is considered a routine step in a defense attorney's process. The motion was denied by Judge Peter Cahill.

Following a brief recess, Morries Hall and his attorneys were called to speak in front of the court. Hall has invoked his Fifth Amendment right, which allows him not to testify if it will incriminate him. He was with Floyd during his arrest and is concerned about a third-degree murder charge related to allegations of providing Floyd opiates.

"I am finding that he has a complete Fifth Amendment privilege here," Cahill said, agreeing to "quash the subpoena" and excuse Hall from testifying.

RELATED: Man who was with George Floyd during his arrest pleads the Fifth amid Chauvin trial

The defense then called medical expert Dr. David Fowler to the stand. Fowler was the chief medical examiner in Maryland and has been a forensic pathologist for more than 30 years.

During the day's testimony, Fowler told the court that he believes the "principle" cause of Floyd's death was "cardiac arrhythmia due to hypertensive atherosclerotic cardiovascular disease during restraint."

Fowler added that he believed there were several other factors contributing to Floyd's death.

"His significant contributing conditions would be, since I've already put the heart disease in part one, he would have the toxicology, fentanyl and methamphetamine," Fowler said. "There is exposure to a vehicle exhaust, potentially carbon monoxide poisoning, increased carbon monoxide in his blood and paraganglioma, or the other natural disease process he has."

On the stand, Fowler said he would have ruled the cause of George Floyd's death "undetermined."

GALLERY: The Trial of Derek Chauvin

1 / 48
David Peterlinz/KARE 11
Protests outside the Hennepin County Government Center on April 19, 2021, the day of closing arguments in the Derek Chauvin trial.