Fact vs Fiction: Police weigh in on online firestorm over 4th of July in Gettysburg

Gettysburg's Police Chief said law enforcement have not validated any of the posts circulating online, but cannot say with 100% certainty they are false 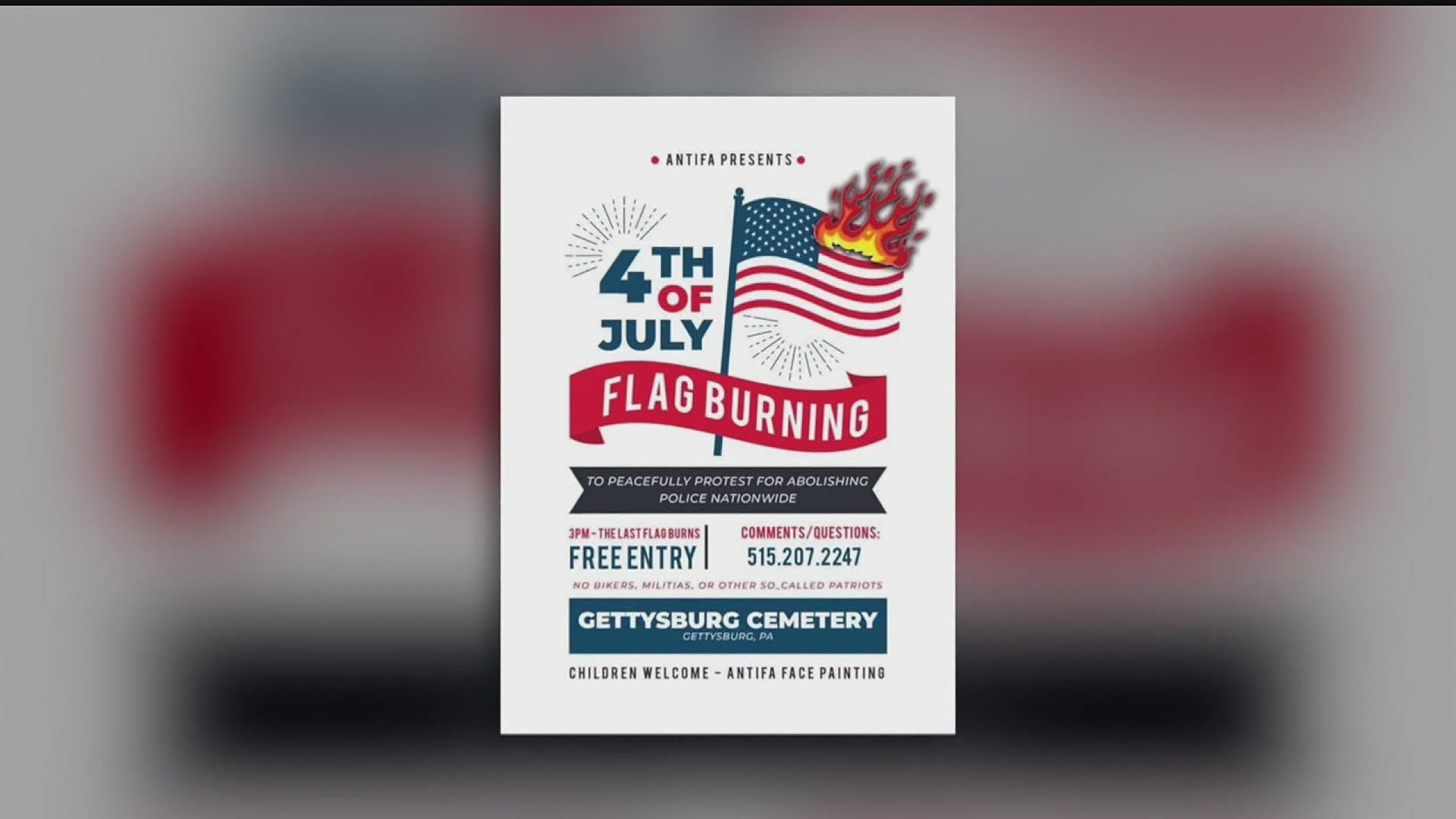 It's rare police ask people not to call with an issue.

But, Gettysburg Police Chief Robert W. Glenny, Jr is asking everyone who is flooding both the police station and 911 with calls alerting them of posts circulating online about July 4th weekend, to stop calling.

His message: police are already aware of the rumors of protests and violence.

"If you are calling to report one of these posts I can assure you that we already know and please don't call us about those," said Chief Glenny, who added, "with all these calls we're getting we're having a hard time accomplishing other things like the investigation of the posts."

Glenny said he still wants people to call if they see anything suspicious. But, he wants everyone to know the posts are already being investigated by experts on the local, state, and federal level.

"We have sent all these and other posts to intelligence sections both federally and statewide and then we have our own small intelligence person working on them," said Glenny.

Glenny spoke to FOX43 again Tuesday as new posts also arose that made claims of a police bulletin that warns of an ANTIFA plot. Glenny said the Gettysburg Police Department has not confirmed anything like that and, in fact, that so-called police bulletin is not from police.

"There's the rumor going around again on various social media platforms. Some people are getting it through messenger, Facebook, that the Gettysburg Police Department has confirmed this lengthy list of things or an ANTIFA plan," said Glenny. He later added, "my guess is whomever did it cut and pasted the Gettysburg Police Department and phone number."

Online posts also warn of people stockpiling fireworks for harm and planning violence in suburban neighborhoods. Additionally, the posts warn that people are setting off fireworks leading up the 4th of July as part of a bigger plot to throw off police on the actual day of the event.

Glenny said claims that people are setting off more fireworks than usual leading up to the 4th of July are also not true in Gettysburg, Adams County.

FOX43 previously asked Glenny about a flyer that warned of a flag burning in Gettysburg National Park. Read the police and the National Park's response to that rumor here: Gettysburg officials say they're aware of social media rumors of a flag burning at National Park July  The flyer promotes the alleged event as a peaceful. protest to abolish police nationwide. But, it also includes words on the flyer such as "children welcome" and "ANTIFA face painting"

"Again, I cannot confirm that it's real or deny that it's real. There are some things in there that if you look at it from a law enforcement perspective that don't fly," he said, later adding "ANTIFA is not in the habit of facepainting for children."

"I would love to be able to ensure everybody out there that these are trolling posts from folks that are just trying to get them upset and scared. I truly hope that is the case. But, I can't say that with 100% certainty," said Glenny.

Glenny said July 4th weekend law enforcement from across the area will be out in force including from the National Park Service.

"We are going to do our best to keep you safe. That's our job," said Glenny.

"We at the Gettysburg Police Department want to assure all those that we serve and have sworn to protect that we are aware of the lengthy post currently being circulated on various social media outlets. The Post claims that The Gettysburg Police has "CONFIRMED" an "antifa plan." There is NO TRUTH to that statement. We have no knowledge of the validity of the post's contentions. The Gettysburg Police Department is not aware of any "Law Enforcement Sensitive-Official Use Only" Bulletin. This and similar posts are being analyzed by various intelligence sections in the law enforcement community.

We asked that folks remain vigilant. Please contact the law enforcement agency with jurisdiction in your area to report suspicious activity or things you feel are out of place. However, please do not call to report the existence of this post. We are aware of it and are investigating its origins."