Could Pennsylvania be the deciding factor in this year's election? Experts weigh in

Four years ago, Donald Trump turned Pa. red for the first time in almost 30 years. With another close race projected, could the state decide this year's election? 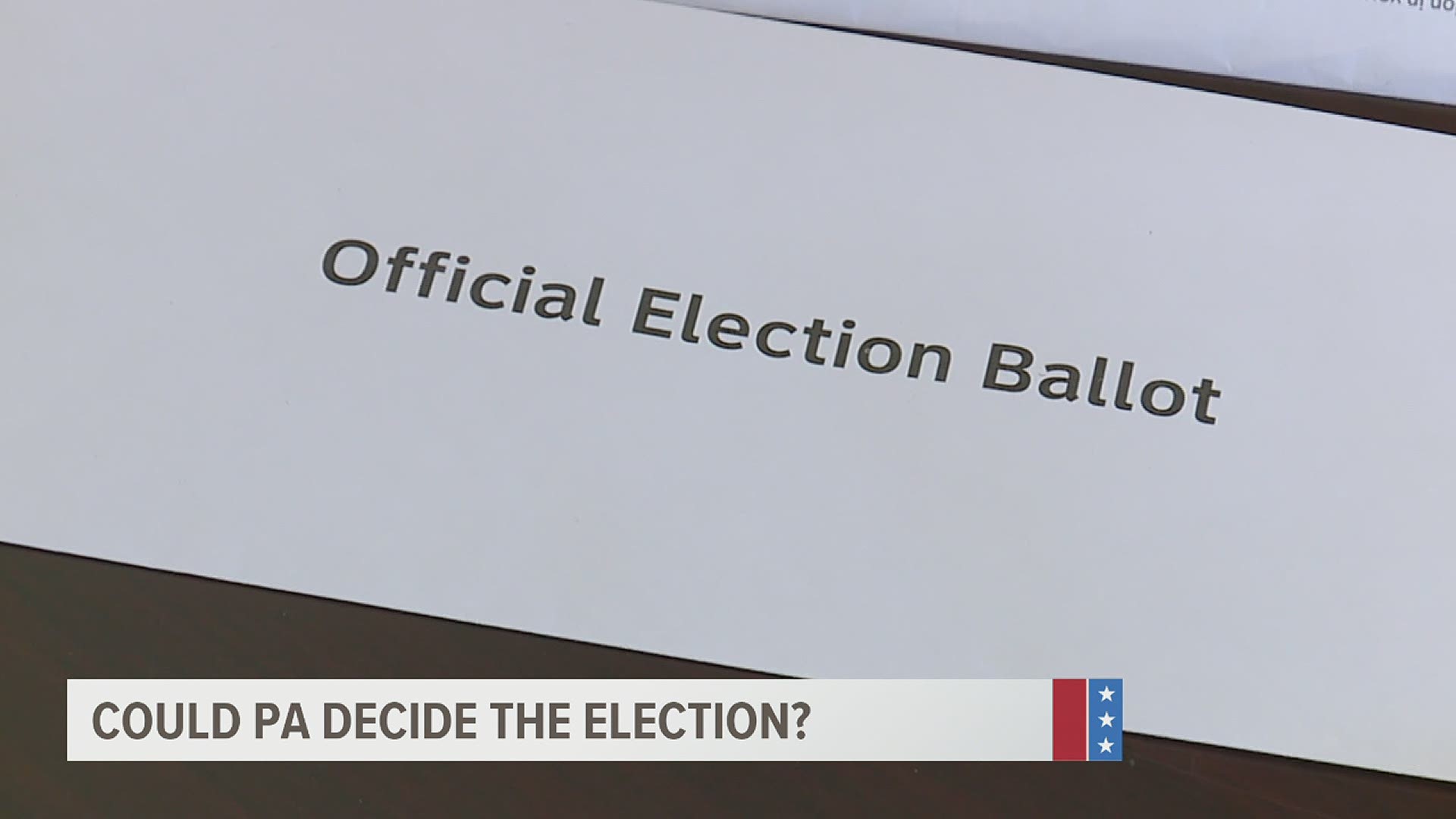 PENNSYLVANIA, USA — Four years ago Donald Trump turned Pennsylvania red for the first time in almost 30 years, beating Hilary Clinton by less than 50,000 votes. With another close race projected, could Pennsylvania be the deciding factor in this year's election?

In 2016, it was one of the most surprising moments in presidential election history. For the first time since 1988 a republican presidential candidate had won Pennsylvania, and it helped propel Donald Trump into the White House.

Now, he's looking to do it again.

"It was one of the closest states four years ago," Sarah Neibler, Associate Professor of Political Science at Dickinson College, said. "And so, this state is of eminent importance this time around."

Niebler said Pennsylvania is once again one of the most competitive states this election cycle. But, she's not so sure this traditional swing state is turning red, despite Trump's potential to win a second time.

"If he's able to do it, it may show that the state is moving in a more conservative direction," Niebler said. "That said, the voter registration numbers in the state still favor democrats relatively heavily. If I were to bet on this, I would bet that Biden would win if the election were held today."

"Well, I mean, you put me in a difficult position to have those words come out of my mouth," McCleary said.

McCleary is Vice President of Cygnal, a republican polling and research firm

But he also said that lead is narrowing, and both sides continue to fight for the State's all important 20 electoral votes.

Joe Biden spending $15 million in television advertising in Pennsylvania from the beginning of August through Labor Day.

As president, Donald Trump has visited the state nearly 20 times.

"Certainly no candidate is taking it for granted," McCleary said. "I think that a lot of people believe that it is the tip of the spear. And as goes Pennsylvania, so will go the upper Midwest. And as the upper Midwest goes, so will the presidential election."

"It's quite possible that Pennsylvania is going to decide the election," Mike Mikus said. "Whoever wins Pennsylvania will likely become the president next year."

Mike Mikus is a democratic strategist with Chartiers Group. He said Joe Biden has the momentum going into November's election, especially after a decision by the Pennsylvania Supreme Court to allow mail-in ballots that arrive three days after election day to be counted.

"All those rulings last week, every single one, benefited Joe Biden," Mikus said.

An increase in mail-in ballots due to the COVID-19 pandemic could also benefit democrats, according to Mikus.

But Brock McCleary said, don't count Trump out. He points to polls in 2016 that gave Hillary Clinton a similar lead in Pennsylvania, a state she ended up losing by less than 50 thousand votes.

And with Pennsylvania so close, anything could end up swinging the election, especially the battle over nominating a new Supreme Court Justice after the death of Ruth Bader Ginsburg.

"I think this is all bad news for Biden," McCleary said. "And I believe that a fight around the Supreme Court only stands to benefit republicans, because we're the ones looking to fire up the base a little more."

The latest RealClearPolitics average of polls shows Biden with a less than four point lead over the president. And with more than five weeks left until election day, that means it's still anyone's game.

"It's just incredibly important that every single person, regardless of who you're voting for, to make sure that your voice is heard," Mikus said.