The peregrine falcon is considered a threatened species in Pennsylvania, so one group is determined to help falcon chicks survive in downtown Harrisburg. 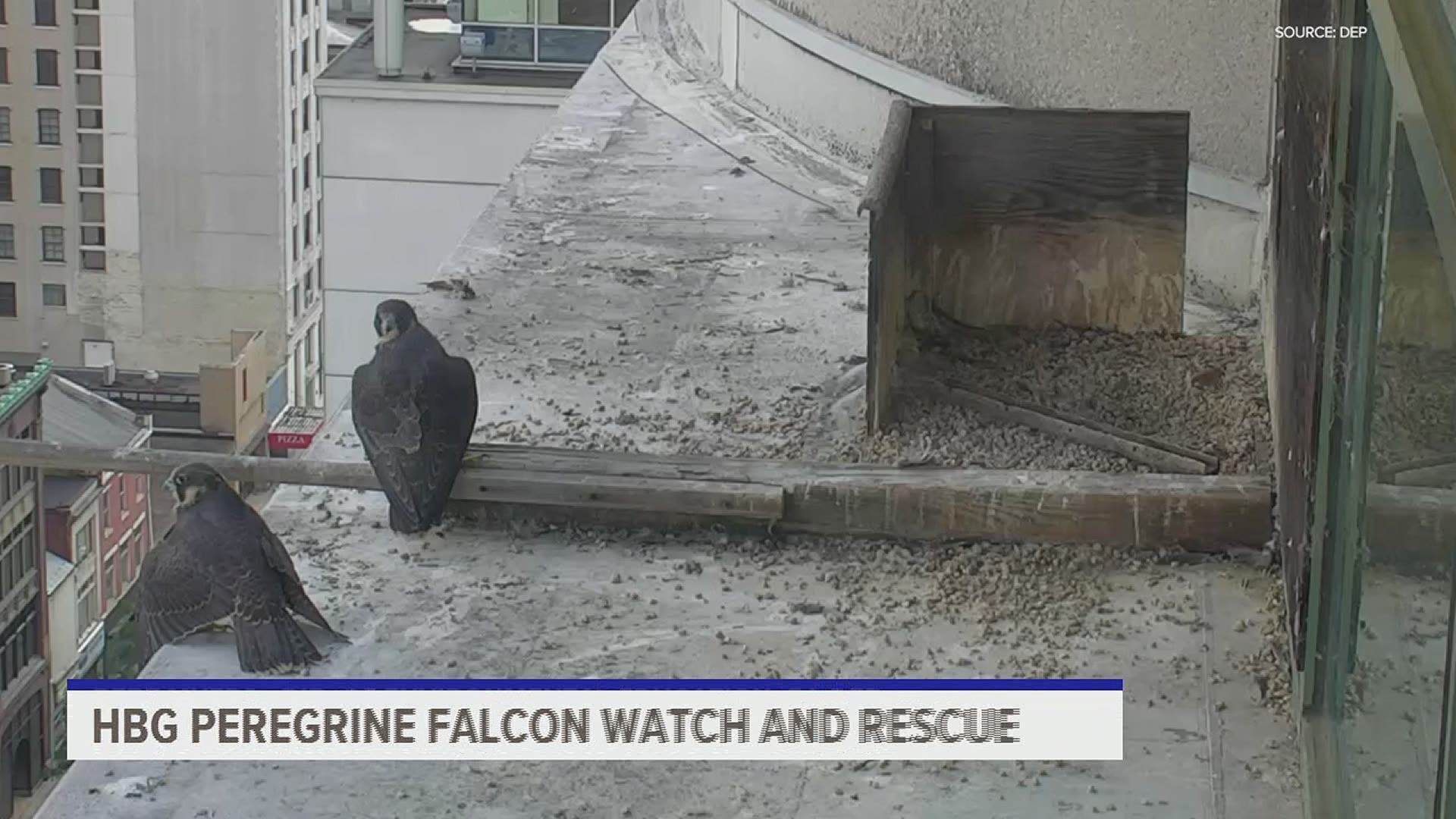 HARRISBURG, Pa. — The Pennsylvania Department of Environmental Protections has maintained a peregrine falcon nest since 2000 on the 15th floor of the Rachel Carson State Office Building at 400 Market St.

The peregrine falcon is considered a threatened species in Pennsylvania. So when chicks hatch each year in a DEP-monitored peregrine falcon nest in downtown Harrisburg, one group is determined to help them survive.

The Harrisburg Peregrine Falcon Watch and Rescue steadfastly guards the chicks for about two weeks each year during their fledgling period, when they learn to fly.

This year the resident female peregrine falcon—known simply as her leg band ID, 48/AE—laid four eggs. All hatched, but one died as it could not compete with its larger siblings for food.

Survival is not assured, however, as the first year of life is the most perilous for young peregrine falcon chicks, also known as eyasses. Due to man-made and natural hazards, 6 out of 10 hatchlings die in their first year, according to the DEP.

“Their population in North America, especially in the East, were really devastated by the use of DDT,” said Bert Myers, the DEP’s director of environmental education.

Chicks in urban areas are particularly vulnerable during the fledging period, Myers said.

That’s because flying is more precarious in cities than the peregrine falcon’s natural cliff habitat. In the wild, chicks that miss a landing can glide to the closest rock and climb back up the mountain or cliff. In cities they often end up on the street, where they can be hurt by people or cars. They are often unable to climb back up flat skyscraper walls.

Armed with nets, the Watch and Rescue team assists the fledglings that end up on ground level get back to the nest. They capture the birds, place them in a box, and take them via elevator back to the 15th floor.

Over 22 seasons they’ve completed 80 rescues, helping 75 of 79 chicks grow up and fly away.

“So we make a huge difference,” said Sue Hannon, the Watch and Rescue’s volunteer coordinator.

Even watching the birds dawn ‘til dusk, through thunder storms and long, hot days, the team can’t save all the birds.

Last Thursday the fledgling known as “Red” because of his red leg band was flying at full speed and did not see the glass of the Rachel Carson building.

“He flew into a window and received injuries that he could not survive,” Hannon said.

Sadly, that’s common. Up to about 1 billion birds die from window strikes in the U.S. each year, according to a 2014 academic study.

“They don't see glass. What they see is the blue sky reflected and they think they're going straight into blue sky,” Hannon said.

On the bright side, 48/AE’s other two chicks this year are finally getting the hang of flying, Hannon said. She thinks they should only need a few more days of practice before they’re ready for the open sky.
Due to the efforts of groups like the Harrisburg Watch and Rescue, peregrine falcon population species are on the rise, and are expected to be taken off the threatened species list in a matter of years.