Beer Wall on Prince opens Tuesday in Lancaster. With 28 beers on tap, the owners say people can pour to their delight. 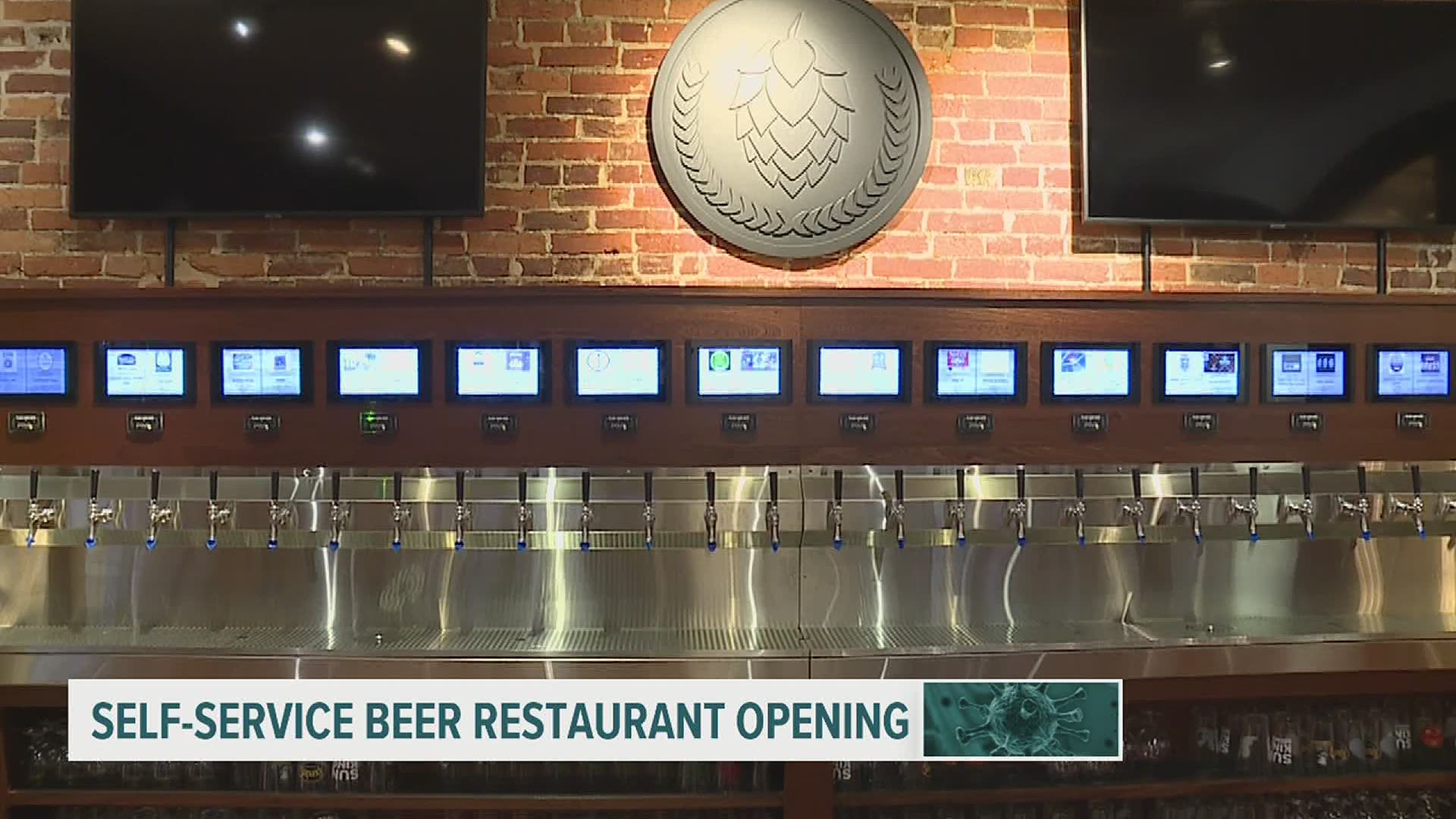 LANCASTER, Pa. — COVID-19 cases may be increasing, but that's not stopping Lancaster's first self-service beer restaurant from opening Tuesday. It's fittingly named Beer Wall on Prince for the 28 beers available for customers on tap.

"This is tougher than it's ever been," said Josh Stenchever, one of Beer Wall on Prince's three owners.

Stenchever says Beer Wall on Prince should have opened back in March.

"Everything came to a grinding halt," explained Stenchever.

The grinding halt shuttered indoor dining service across the state. Stenchever says it would have been a bad idea to open then.

Now, with restaurants allowed to operate at 50 percent indoor capacity, Beer Wall is set to open Tuesday. It's not hard to find beer lovers, Stenchever says it's a question of "if the government will let them into the building." 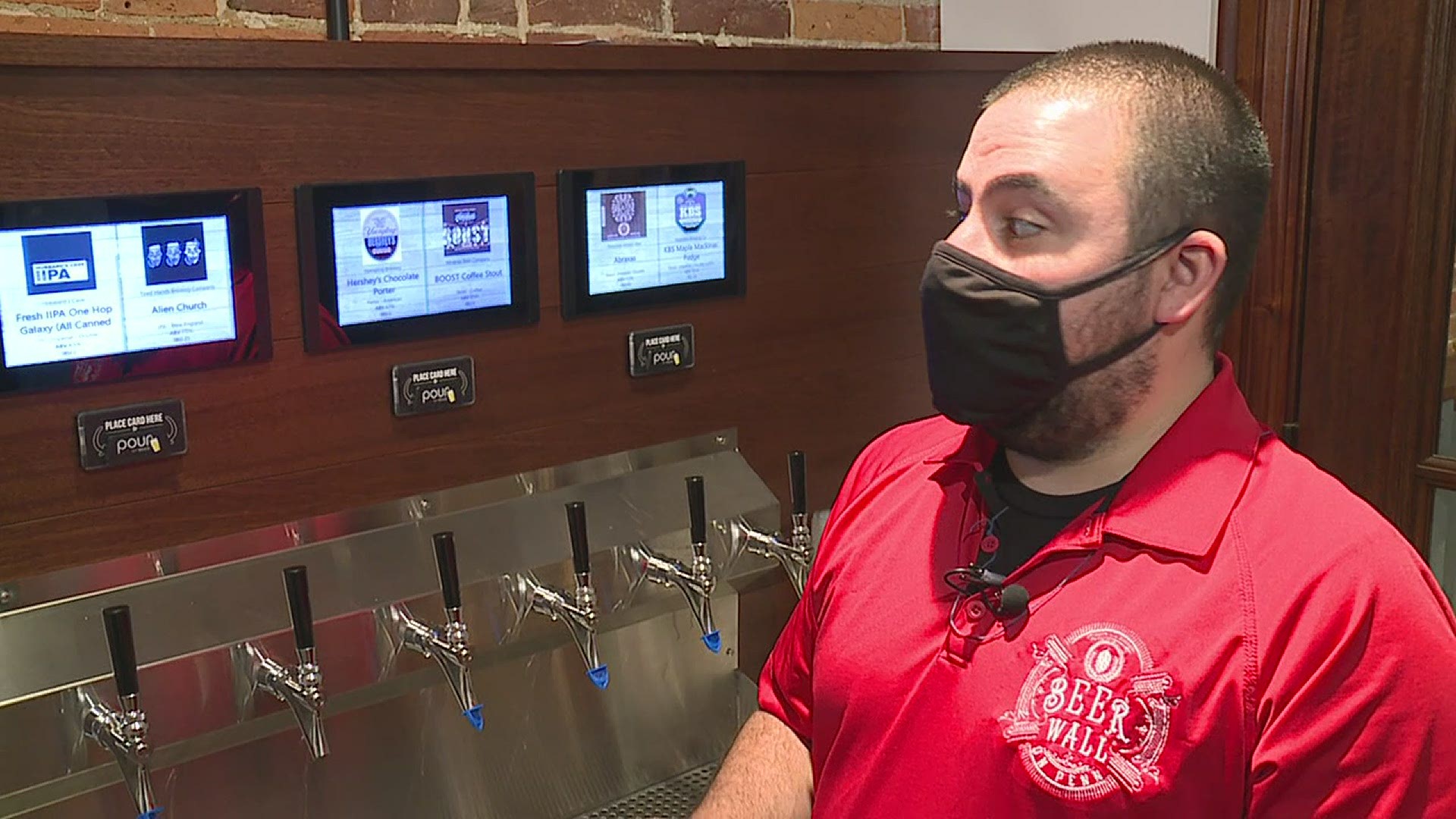 Owners, Stenchever, Ben Hinkel, and Josue Matos, have poured themselves into the business.

"The time and effort I have put into this space is a lot. There are a lot of days doing 60-70 hours a week," said Hinkel, who is also the head chef.

With one other self-service beer spot in West Reading, the owners believe they have the only places centered around a self-service tap system in the state.

"What you do, is we authorize a beer card for you, using a debit or credit card," explained Stenchever.

People can also use cash to pay for the beer card.

"Everything is paid by the ounce. You can have 6 ounces of one, or you can come in and try 20 different beers - two, three, four ounces at a time," he added. "As you pour, it tracks. What it does is it tracks your ounces of how much beer you poured. It also shows the grand total of what you put on the card."

Staff members reauthorize the card after about 64 ounces of beer to make sure you're sober enough to keep drinking. There is also wine, cocktails, a full menu and likely more food and beer to come.

"Opening at first we want to make sure everything runs smoothly before we throw extra on top," explained Hinkel.

With COVID-19 cases rising, the owners' nerves are too.

"We have a contingency plan that, God forbid, indoor dining were to get closed, we would remain open for as long as we can," explained Stenchever. "We hope people see the brand new menu and want something different to try and give us a chance and order pickup food from us."

To make customers feel comfortable and abide by recommendations issued by the state and CDC, Beer Wall on Prince has sanitizer throughout the building and next to the taps. There are also wipes, and people can drink from plastic, disposable cups. Without COVID-19, they could fit more than 80 people into the restaurant, but for now, they will limit capacity to a little more than 60 people.

Stenchever and Hinkel say they chose Lancaster because it's a food destination. They look forward to partnering with other restaurants in the city and tasting what's on their menus.

For now, the restaurant will be open Tuesday through Sunday for lunch and dinner. It opens at noon and closes at 10 p.m., 11 p.m. on Fridays and Saturdays.