YORK COUNTY, Pa. — For one family in York County, being able to celebrate Christmas with their 3-year-old daughter is their biggest blessing. That’s becau... 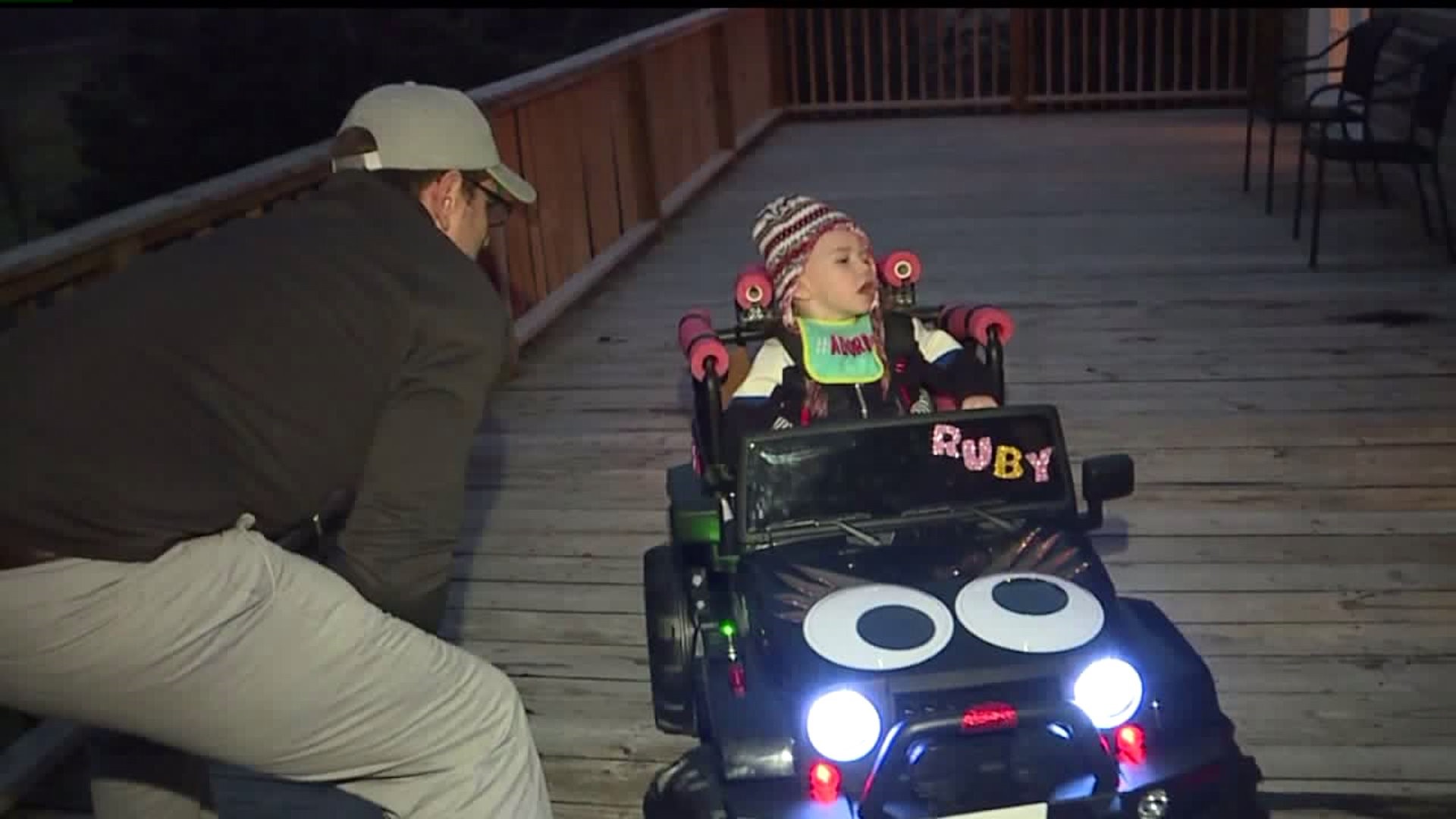 YORK COUNTY, Pa. -- For one family in York County, being able to celebrate Christmas with their 3-year-old daughter is their biggest blessing.

That’s because she has a rare brain disease called H-ABC, and every day, they say their little girl defies the odds.

Ruby Hoffman is that 3-year-old little girl who was diagnosed as a baby with H-ABC, a form of Leukodystrophy, which affects the brain and worsens over time.  Less than 100 people in the world have H-ABC, and the Hoffman family says they’re thankful for every day they have with Ruby because they don’t know which one could be her last, but they’re very optimistic.

For the Hoffman family, each day is another chance to teach their 3-year-old daughter Ruby something new.

“She is starting to do more now. I think that she is pointing at things, and she is able to communicate. We’re working on some signs. Being a 3-year-old is a lot of frustration. She wants to do things like all the other kids do," said Mindy Hoffman, Ruby's mother.

As a baby, doctors diagnosed ruby with H-ABC, a form of Leukodystrophy which causes mobility difficulties, delays mental development, and worsens over time.

Currently, there is no cure for H-ABC.

“I think we’ve seen a couple little regressions here and there, but we make up for them in other ways, with chewing and swallowing. We make a couple little adjustments, and we make it work," explained Hoffman.

Ruby’s mother, Mindy, is very hopeful. Ruby just celebrated yet another milestone, her 3rd birthday, and soon she will go to school.

“I have faith and maybe a little bit of denial about what’s going on… because to me, Ruby is perfect," explained Hoffman.

The family says Ruby is like any other girl her age, a little stubborn, a bit sassy, and ready to be independent.

“She wants to do it herself. She knows the things other kids are doing, and she has the want to do it. It’s her brain keeps her from doing it the way you and I do," said JoAnne Bennett, Ruby's grandmother.

The reality of the diagnosis hit the Hoffman’s hard, but they say love and support from others helps them cope.

“Would I give all that up so that Ruby would be a typical child? And yes, I would," said Hoffman.

They hope others can learn from Ruby’s story.

“I feel so blessed, you know, not everyone gets to live in this life and to appreciate little milestones the way we can," said Hoffman.

Again, less than 100 people in the world have H-ABC. The Hoffmans want to spread awareness about it so they can try to find a cure. If you would like to learn more about what life is like for Ruby,  her family created a Facebook page for her.