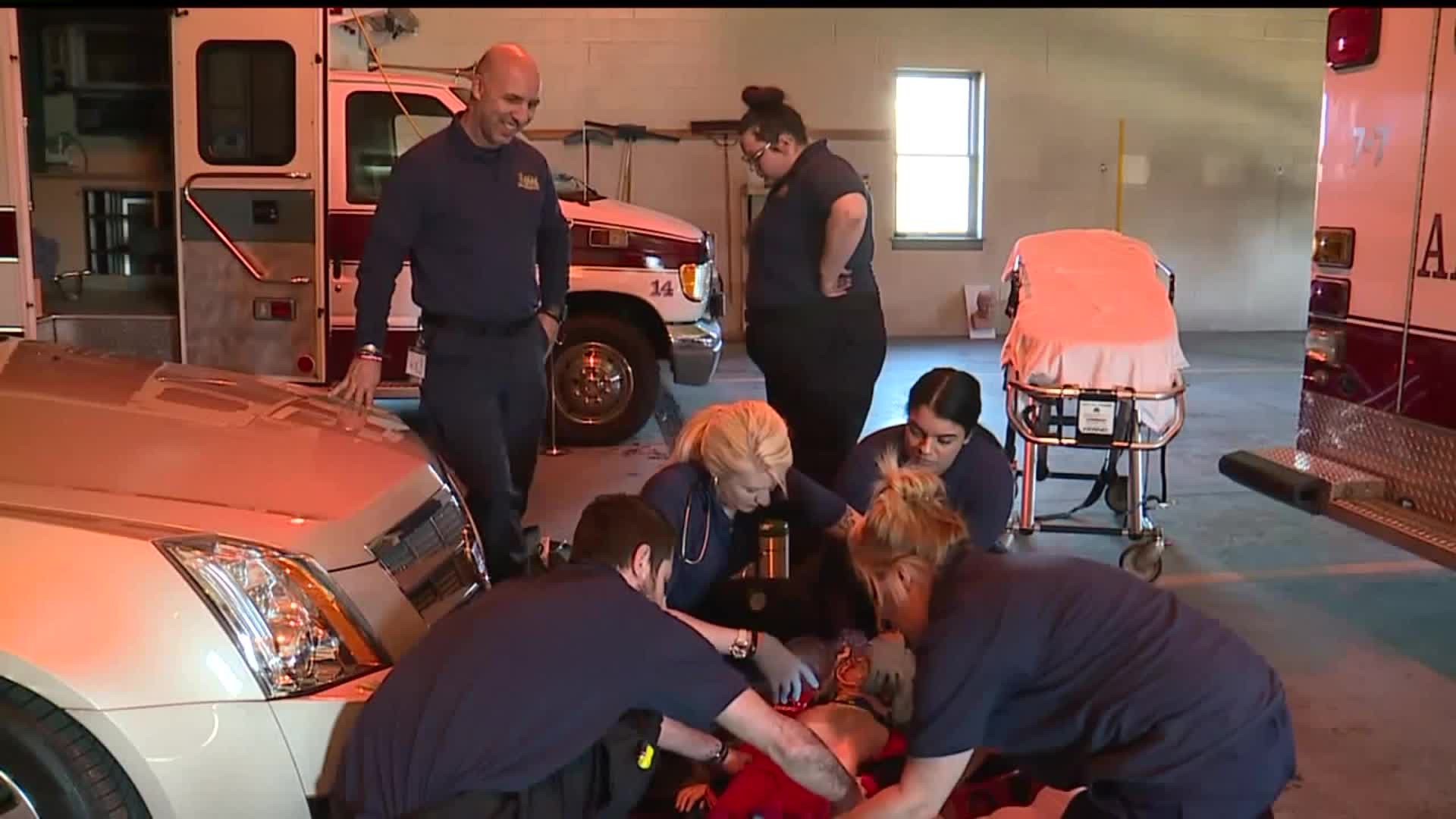 LANCASTER COUNTY, Pa.-- FOX43 first introduced you to the "EMT Recruit Academy" back in January -- after Susquehanna Valley EMS launched the program to help reduce the national shortage of EMS workers.

The program allows recruits to get paid while they train to become EMT certified. FOX43's Bryanna Gallagher met with one of the first students to pass her certification and takes us through tough journey to become an EMT.

"I just wanted to be able to do something that helped people, and even if it meant being able to give them a little bit more time till we got to the hospital, to be able to get them the help that they needed," says Cain.

She got her first test of what it takes to be an EMS worker at just 16-years-old.

Fast forward a few years to finishing college -- she heard about this new program.

"I knew this was for me, so I put in an application, came in for an interview, and now here I am," Cain says.

The six week training program was difficult -- Katelyn putting in many hours studying daily -- between class, practicing the skills, reviewing material on her own time. But she kept pushing through with these words of motivation...

"Stay calm, when its stressful, just stay calm and keep the situation under control."

The course instructor, Rob Walker says the program is more challenging for the students because they have to retain a lot of information in a shorter time frame.

"I basically take a five gallon bucket and fill it with all of the information they need and they need to be able to take that ladle and pour out information to solve problems," says Walker.

The problems they have to solve... are not always easy.

"Being able to differentiate shock, trauma, and the different kinds of breathing issues and cardiovascular problems," Walker says.

When your outside of the classroom, things are completely, she says there are going to be things you just don't see and you aren't going to be sure how to approach it.

It wasn't until week four when Katelyn says the pieces of the puzzle finally started to come together.

As EMS workers they must quickly evaluate and treat the patient often in less than 10 minutes, knowing little information when they get a call.

Katelyn says you never really know what to expect when responding to calls.

"You just don't know until you get there. Are you going to arrive to a patient that's bleeding out, are they not breathing at all? Like we had, he was bleeding and not breathing-- you wan't to treat those as soon as possible because they are life threatening," says Katelyn.

From infants, to preschoolers, and teenagers -- one of the toughest things for her so far she says, is calls involving children.

"They're just little mini sized adults and they start to go down hill, they go down quick, so trying to be prepared for that... I think has been a little bit more challenging for me," Cain says.

Although some days are more challenging than others, hard work pays off.

"Kate shined, she studied hard, she worked hard, she was our first student to actually pass both the written and practical exam," says Walker.

"I actually had one of my patients thank me and that was just rewarding because I think there wasn't much I could do for her, other than we just had to transport her to the hospital and get her some help she needed. When we got there she was just like 'thank you' for you know holding my hand and just talking to me," Katelyn says.

Although there wasn't much she could do for the girl at the time, she comforted her giving her more time getting to the hospital -- just one of the thing she hoped for when starting the program.

The second round of the program began on June 10. For more information on the EMT Recruit Academy you can visit their website.