By: Matt Maisel Drivers honked at the few dozen people standing along South Queen Street in York Township on Saturday. Some stood on the curb, holding signs. On... 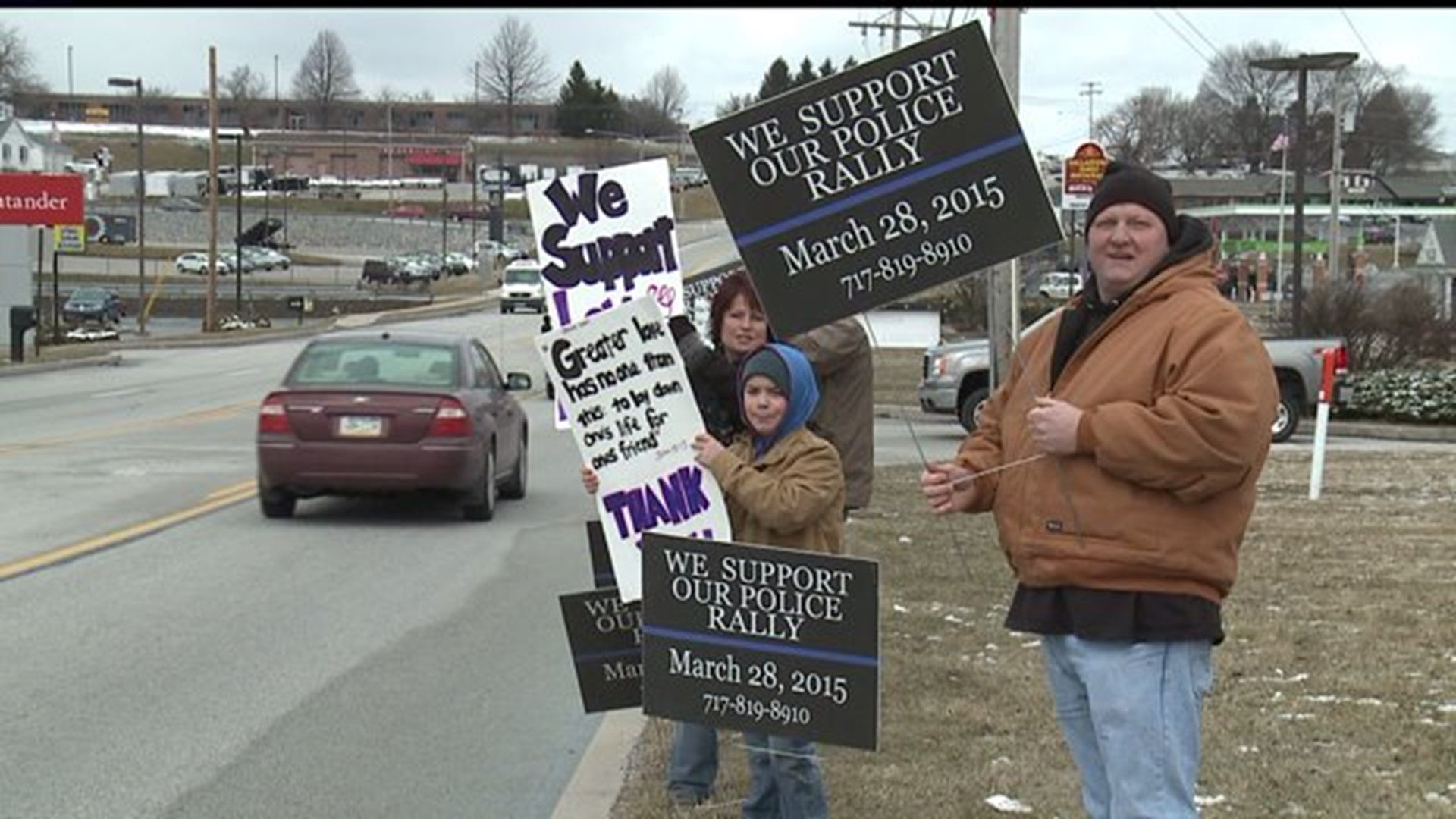 Drivers honked at the few dozen people standing along South Queen Street in York Township on Saturday.
Some stood on the curb, holding signs. One read “THANK YOU Local Law Enforcement” in bold, block letters. Others stood by the trailer in the snow-covered grass, next to the giant banner which read “OUR POLICE RALLY.”
“It feels good to stand up for something you believe in,” said Lorri Paul of Red Lion, who was holding signs in support along the side of Queen Street.
“Even if you have to stand by yourself, just so you're standing.”
York County’s Finest, being supported by York County’s finest citizens.
Denny Cottrell, Jr., the rally’s organizer, said, “This is payback. To show we care.”
In December, Cottrell, a local business owner from Dallastown, started brainstorming ideas with a friend on how to show appreciation for local police officers. They wanted to honor law enforcement in the wake of the October capture of Eric Frein, the man accused in the shooting death of one Pennsylvania State Trooper and wounding another in northeast Pennsylvania.
“We’ve got to do something to let law enforcement know they're not alone,” Cottrell said. “It seems like the community forgets how much they’re actually needed.”
Saturday’s rally began at 9 a.m. in the grass field next to the Dallastown Family Restaurant. Throughout the day, people stopped by to support the rally, and the officers the rally was designed to give thanks. A few local politicians took part in the rally as well.
Occasionally, an on-duty policeman would stop by to show their appreciation.
“They would say thanks, in private,” Cottrell said. “No one wants to be in the spotlight but they're greatly appreciative.”
Cottrell’s hope was the rally would attract as many as 200 people at a time, but Saturday’s weather was likely the main reason why only a few dozen showed up. At its peak, about 75 people attended the rally, Cottrell said, which featured free food and drinks donated by local businesses.
“There should be a lot more people out here. They should be more dedicated,” said Ronda Heilman of Manchester, whose father worked in local law enforcement for 30 years. “The law enforcement has to work no matter what the Mother Nature throws at them. It’s our job to show them how appreciative we are of the jobs they do every day.”
One state police officer who attended the rally, but wished to remain anonymous, helped start a donation jar for the family of Sgt. Robert Bemis of Hershey. Bemis was critically injured Friday while helping a stranded driver along Interstate 81 in Schuylkill County when an SUV slammed into the back of his patrol car, striking him.
Starting the rally was not easy. Many area police officers scoffed at the idea of an event in their honor, Cottrell said.
“It had never been done before,” he said. When he got clearance to hold the rally, Cottrell said, “They were shocked. But a good shocked.”
Even with the low numbers, Cottrell viewed the rally as a success. His hope is it becomes an annual event, with a 5K road race and motorcycle ride to be included in future years.
“We’re just people congregating. Talking, eating, supporting. Good citizens coming together.”