Winning on and off the court

MIDDLETOWN, Dauphin County –  Overcoming daily challenges can be difficult for some members of the special needs community.  And with the help of a progra... 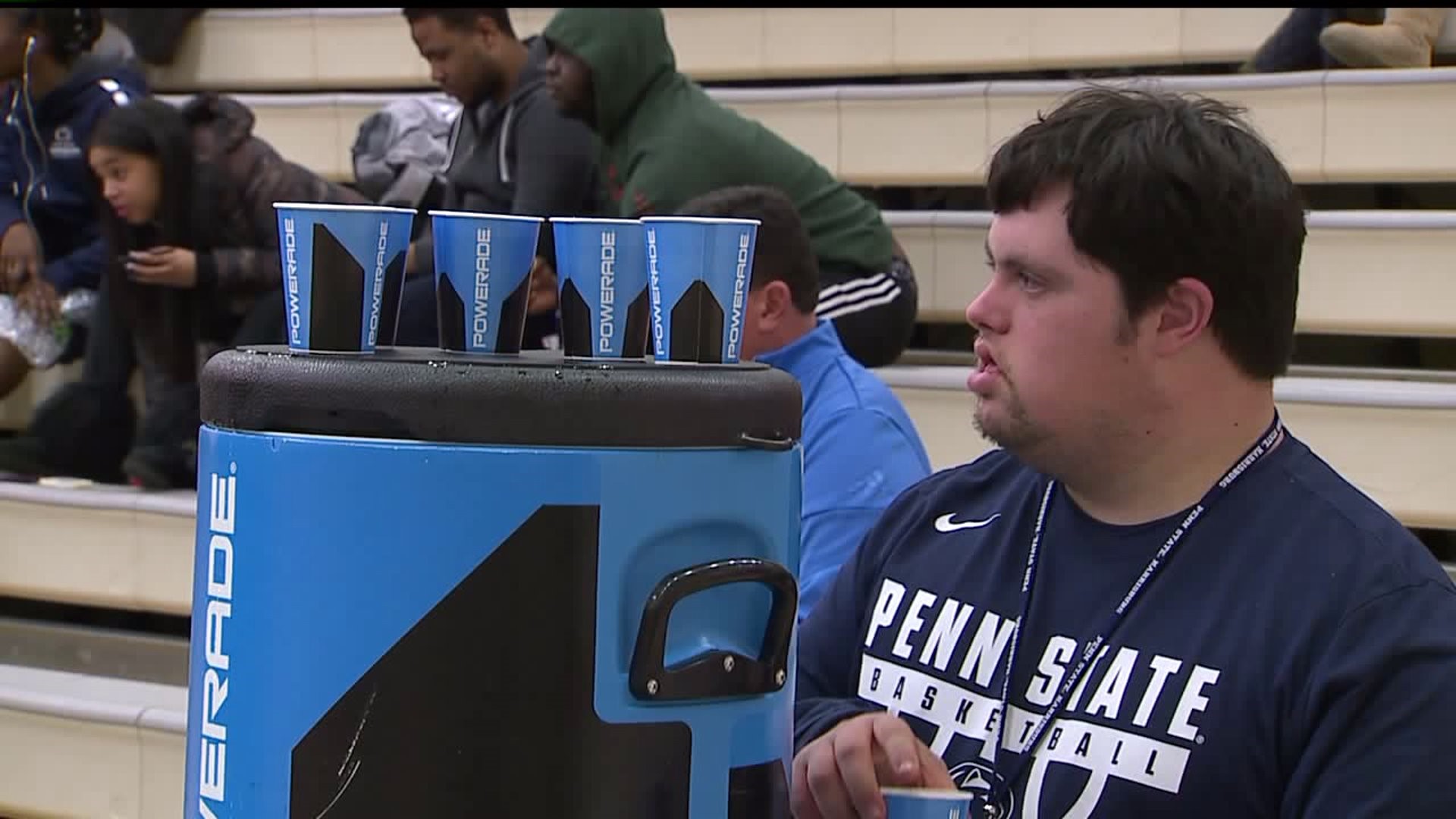 MIDDLETOWN, Dauphin County -  Overcoming daily challenges can be difficult for some members of the special needs community.  And with the help of a program at Penn State Harrisburg, those with developmental disabilities are furthering their education and life experiences.

Matt Joyce is one of those students.  He is a graduate of Lower Dauphin who loves sports and wanted to go to college.  Matt Joyce has down syndrome, but with the help of the Career Services Program and the Dream Partnership at Penn State Harrisburg, Matt is winning both on and off the basketball court.

"I am the best waterboy in Pennsylvania"

That is a bold statement from Matt, but he has the credentials to back it up. He earned that title at Lower Dauphin working for both the football and basketball teams, and he has impressed his new teammates at Penn State Harrisburg with his hydration managing skills.

"He is always on point with everything," says junior forward Kahlil Williams.  "As soon as you sit down you could be listening to coach, talking in the huddle, he is not going to care. He is going to walk up to you, tap your shoulder and make sure you have your water."

Penn State Harrisburg's manager, Michael Caldwell, has even high praise, "The team is Matt and Matt is the team. He makes this team better."

The high praise from his teammates is not surprising for anyone around the program.  The moment you walk in, you can tell that head coach, Don Friday, has his boys on the right path, that sports transcends life. And that there are bigger things than just winning basketball games.

"We want our guys to take with them, life experiences," says Friday. "As much as Matt is getting out of this experience being part of our team, we are getting just as much out of it.  Having him around, seeing the way he reacts to some little things that we take for granted sometimes, I think it centers our players. I know it centers me."

Matt becoming ingrained in the team has touched a lot of people, coaches, fellow managers and every single player that wears the blue and white . Maybe the person who gets the most out of it is Matt`s dad, Joe. The elder Joyce always wanted his boys to participate in sports and go off to college.  Matt's journey is a dream come true because at one time this all seemed impossible.

"If you would have told me when he was born that one day he would go to college, I would not have believed it. He is part of the team... and that is what he does," Joe Joyce says with a smile.

That smile isn't accidental.  Joe`s thoughts on college are similar to other parents of children with developmental disabilities,  a fear of hitting the cliff after high school.  Educational services end, school is finished for most, and the prospects of a career are not high.  Penn State Harrisburg intends to change that thinking.

Linda Rhen, an Assistant Professor of Special Education at Penn State Harrisburg, believes her students have a lot to contribute to the workforce in Pennsylvania.

"We all want to have a career, not just a job but a career. A network of friends and associates and you see that they can see this path opening up for them."

The only Penn State Campus to offer a curriculum of its kind , the Career Services Program is one of just five programs in the entire state. And the students are already paving a path forward obtaining jobs. As for Matt Joyce, he may be shy talking about himself, but he knows what he wants out of his future career.

"I get to work and help others," says Joyce.

Always thinking of others is what defines Matt Joyce. Whether it be on the court or at home where he helps mom and dad take care of his little brother with autism, Matt always looking to inspire.

"I take care of my little brother with severe autism  and I am a role model for the kids and students," Matt proclaims.

There are countless stories of Matt motivating his teammates at practice, whether it is pushing a tire, tending to their needs or joining in on drills. But it's hard to top the letter given to Coach Friday just before tip-off of a key game .

"Coach Friday, I want to say to the team , thank you for giving me the shirt and I love you all and I want to help you stay hydrated and do as much as I can in practice. I love you so much and thank you for the candy, Love Matt Joyce," reads the letter.

A touching moment that hit Coach Friday pretty hard as he pauses to respond. "Nothing you can say to that, there aren't words that can quantify that. It is touching and it touches you right in the heart."

"The players have all just embraced him so naturally it is really a great thing ," says father Joe.

Michael Caldwell takes it another step further.  "Matt just brings another spark to a already super competitive team  and something that we can all just look towards, not only as one of our biggest fans, but one of our best teammates too."

Matt Joyce and the Penn State Harrisburg Basketball team are winning on and off the court.