EAST DRUMORE TOWNSHIP, Pa. –It’s not every day a dog is allowed to take a stroll down a high school hallway. But Tre is not your average dog. Each s... 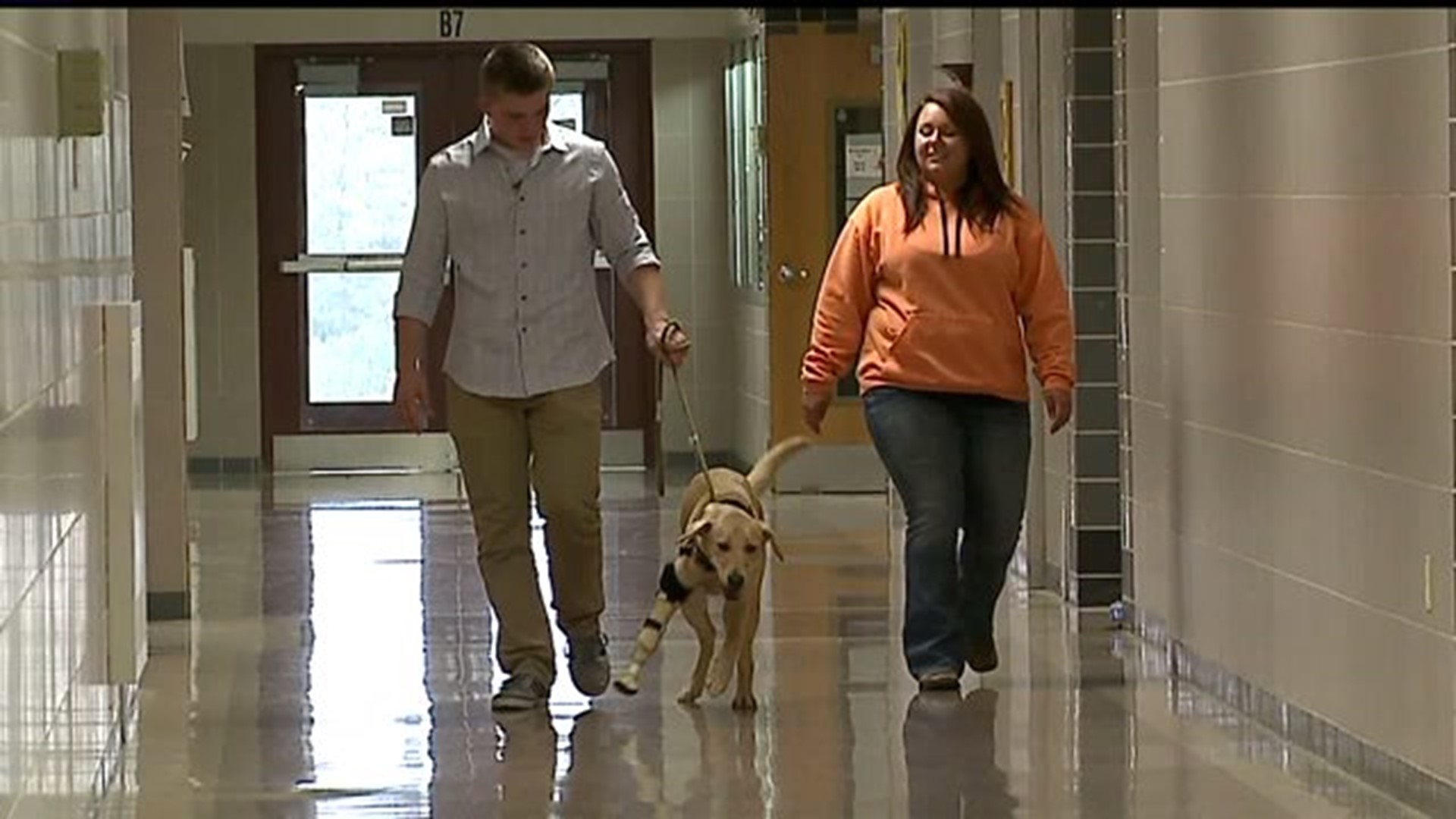 EAST DRUMORE TOWNSHIP, Pa. --It's not every day a dog is allowed to take a stroll down a high school hallway.

But Tre is not your average dog.

Each step is followed by a loud knocking noise on the floor, like a pair of clogs, click-clacking on a hardened floor. Tre stumbles, which is more than anyone thought he'd be able to do when he was born last August.

"He's not going to have that fourth foot to run around with," says Tre's owner Kimmy Richard, "but he has no idea it's missing."

Tre had his right front foot amputated when he was days old. Kimmy says his umbilical cord was wrapped around it, cutting off circulation. Tre, a yellow lab, lived the first four months of his life with three legs, until Kimmy heard about Christian Weder.

"Christian was a life saver for Tre," she says.

Christian is a senior at Solanco High School, where Kimmy herself was a graduate in 2009, and her mother, Christine Sawicki, currently teaches. Christine knew about the school's mechanical engineering program, which recently had received six new 3-D printing machines. When Christine approached colleague Michael Minchhoff about the idea of printing a 3-D prosthetic leg for her daughter's puppy, Christian jumped at the opportunity.

"Mr. Minchhoff passed it down to me asking can we do this because Kim has this dog who doesn’t have a leg," Christian said. "I started studying, and Googling ideas."

It didn't take long for Christian to make Tre's first prosthetic leg using the school's 3-D printing machines, and it turned out more successful than anyone could have anticipated. Christian, despite having two dogs of his own, says he was uneasy when Tre tried on his first leg.

"He was in corner (of the classroom) walking around, and all of a sudden you heard a click. You could tell he put some weight on it, and he started walking on it," Christian says.

Since the initial leg, Christian has helped fit Tre for three additional prosthetics as the yellow lab has grown. His most recent model is expandable, both in height and width.

"(Christian's) engineering skills are amazing," says Tre's veterinarian, Dr. Mikk Regester of the Willow Run Vet Clinic in West Lampeter Township. "(Tre) is even across the top line, even on his hind legs, and he's not swayed back."

Christian's love for technology and dogs became a perfect fit. As his senior year winds down, he won't be too far from Kimmy and Tre. Weder plans to major in mechanical engineering at Thaddeus Stevens College of Technology in Lancaster before hopefully transferring to a larger program in two years.

The prosthetic leg Christian made for Tre is a short term fix. Once Tre is done growing within the next year, he will be fitted for a real prosthetic leg.

In the meantime, Tre rumbles down the hall at Solanco High School. As the bell rings for students to change class, a handful stop and look at the 9-month-old puppy stumbling on a prosthetic fourth leg. Tre's tail wags vigorously, and his tongue meets the face of anyone who comes close.

"He keeps trucking through not having a leg," Christian says. "He doesn’t even act like he’s handicapped in anyway."

Tre may not look like your average dog, although in his mind, he's as happy as it gets.