CUMBERLAND COUNTY, Pa. – “When I’m not with him, a piece of me is missing.” Nate Layne accomplished many different things during his las...

CUMBERLAND COUNTY, Pa. – “When I’m not with him, a piece of me is missing.”

Nate Layne accomplished many different things during his last two years at Cedar Cliff High School.  He was co-captain of the debate team and even prom king.  But the one constant throughout it all was his wingman, a service dog named Colorado.

At the commencement ceremony for the Class of 2018, Colorado made history by becoming the first service dog to graduate from Cedar Cliff. 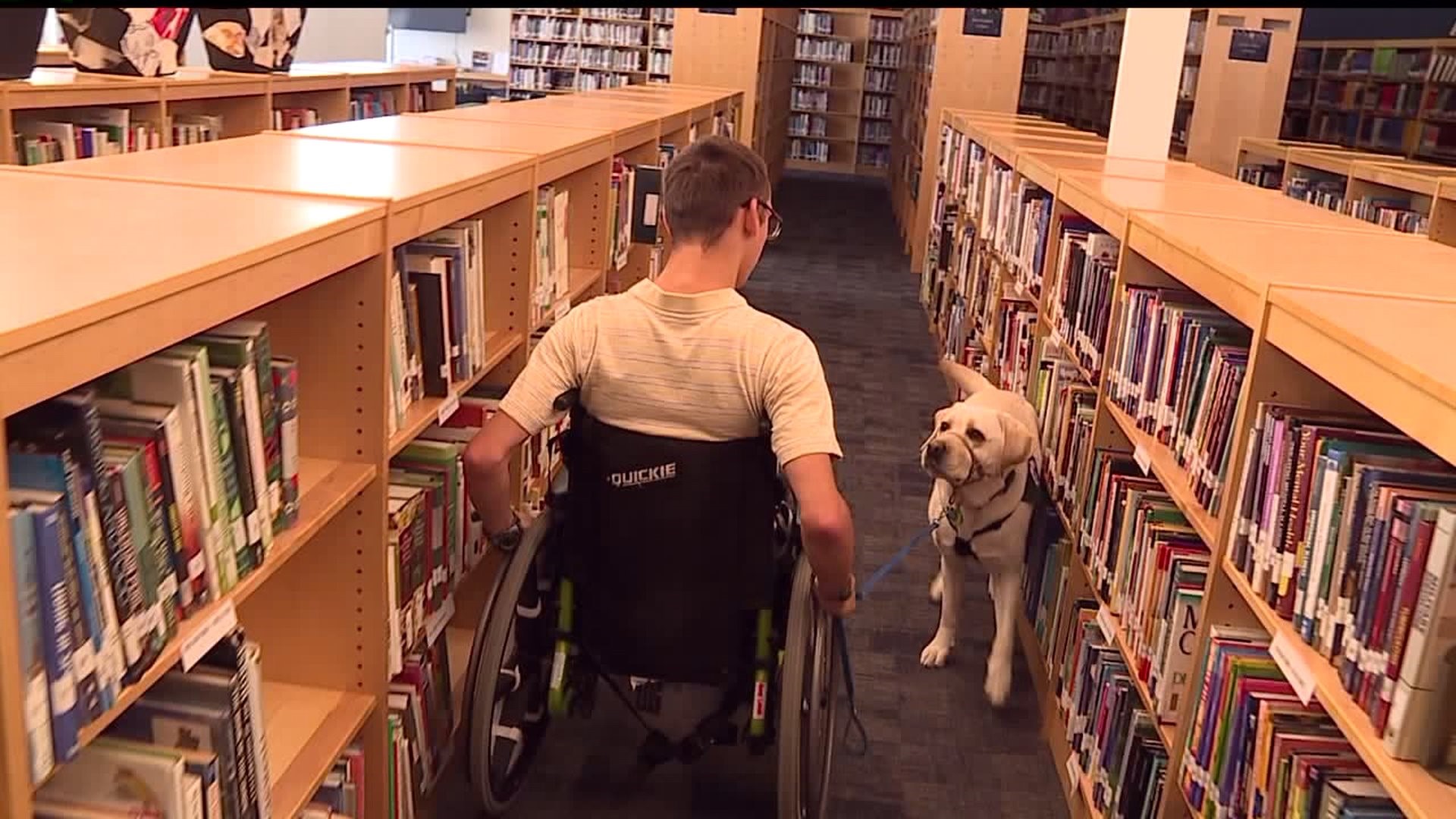 Nate has cerebral palsy.  And even though he's always been very independent, Colorado has made a big difference.

"He just helps with all the little things," Nate said.  "He can pick things up off the ground.  He can push the handicapped button on doors.  He can do counter transactions -- if I hand him my wallet, he can hop up on the counter to buy something."

"As a mother, I tend to hover.  Especially if you have a child who's disabled, you do that.  And I needed to stop," said Snyder.  "And one way to do that was to get him a service dog."

"Even though Nate is independent, there are just certain things he has a hard time doing.  When Nate's on forearm crutches, the dog will (attract attention), because everyone notices a dog.  They don't notice the crutches, but they'll notice a dog and clear the way for the dog."

Colorado came to Nate two years ago via Susquehanna Service Dogs.  After the initial interviews, Nate went through a process called 'Meet the Dog,' where he interacted with several dogs that might be a good match for him.

"We'd like to say that we make the match, but often it's the dogs that pick the partner, said Kerry Wevodau, Director of Development for Susquehanna Service Dogs.  "You can see that instant bond the minute they walk in."

"I loved (Colorado) from the moment I saw him," said Nate.

"We have about 95% labs in our program," Wevodau said.  "We use them for a number reasons.  They transfer their loyalty easily, they have soft mouths and they're well-respected in public.  The biggest reason we use them is because they're really food-motivated, so they will learn to do anything for a piece of food."

A few months after Nate met Colorado, the pair attended 'Team Training' for two weeks.  That was followed by a six month period where essentially nobody other than Nate is supposed to touch the dog.

"My family had ten minutes a day to interact with the dog, because the first six months is an essential bonding period," Nate explained.  "It's just me and him, so we can have that bond and nobody else can distract from that."

Nate first started taking Colorado to school with him during his junior year at Cedar Cliff.  And it became a learning process for everyone, even the teachers.

"First off the bat, I felt bad for Colorado," said Melissa Bolen, Nate's 11th grade English teacher.  "So I bought him a mat because I wanted him to lay on something soft not the dirty floor.  We put a little sign up and he had his own little spot."

"Colorado would pick up pencils, he'd pick up paper, he would do all this stuff and it was fascinating to see those two learn together and grow together," Bolen said.

Colorado even traveled with the debate team in the school van, with coach Ken Gehosky describing Colorado as a 'silent partner.'

"We went on long tournaments, very long drives in the van and Colorado was always sitting front and center in the van," said Gehosky, who is also a history teacher at Cedar Cliff.

"These are long days and kind of boring days.  There's a lot of downtime, so Colorado was always there as a silent partner, giving us a little extra endurance because he was so patient and seemed so unperturbed by the long days."

Gehosky also observed mutually beneficial aspects of the relationship between Nate and Colorado, calling it a two-way street.

"As much as Colorado provides for Nate, Colorado also has needs and Nate is responsible for that," said Gehosky.  "It's a partnership in the fullest sense where they both are providing for each other what each needs."

While at Cedar Cliff, Nate and Colorado basically ended up educating the entire school about service dogs.  And the biggest challenge was establishing boundaries.

"I think the hardest thing was that people wanted to pet the dog," said Bolen.  "And Nate had to constantly say 'He's working, you can't touch him.'  But once kids realized that, I think there was a lot of respect."

Even though it's very tempting to pet service dogs like Colorado, the rule is simple.  When the vest is on, Colorado is working.  When the vest comes off, at home for example, he's just like any other dog.

Besides his vest, Colorado also got to wear something else -- a custom-made cap and gown for graduation.

The company that provides the caps and gowns found out about Colorado and offered to make a special canine version for him.  Then Nate's mom surprised Nate with the modified outfit.

"Nate didn't find out about it until I got it," said Nate's mom Leanne Snyder.  "I took Colorado with me in the living room, put the stuff on and then I started walking down the back hallway and singing (graduation music).  Then here comes Colorado to see Nate, and Nate was floored."

Since Snyder works at Cedar Cliff, she was allowed to personally hand her son his diploma during the official graduation ceremony.  She also gave Colorado his "diploma," which was actually a specially-made dog treat.

Even though Nate and Colorado have only been together for two years, Nate's friends say that Colorado's impact on Nate's life has been immeasurable.

"I don't remember Nate without Colorado," said Justin Charles, Nate's friend since elementary school.  "It's such a part of our life now, we take care of Nate and Colorado."

"I'd have to say that before Colorado, it was just kind of me and Justin helping Nate out," said Joe Martz, another of Nate's closest friends.  "When you're wheelchair bound, just the little things like opening a door, or getting into an elevator, are kind of hard.  So we were always there for Nate to help him out with that stuff, but once Colorado came into the picture, Nate could do all those things on his own more."

The ultimate wingman, Colorado has made life easier for both Nate and his family.

"The dog has helped in so many ways to make me feel more comfortable letting Nate go out into the world," said Nate's mom.

The next stop for Nate and Colorado is Albright College, where Nate plans to study criminology.