1,300 former York Hospital patients may have been exposed to potentially fatal bacteria

YORK, Pa.–Approximately 1,300 open-heart surgery patients at WellSpan York Hospital have been notified after the facility announced Monday they are workin... 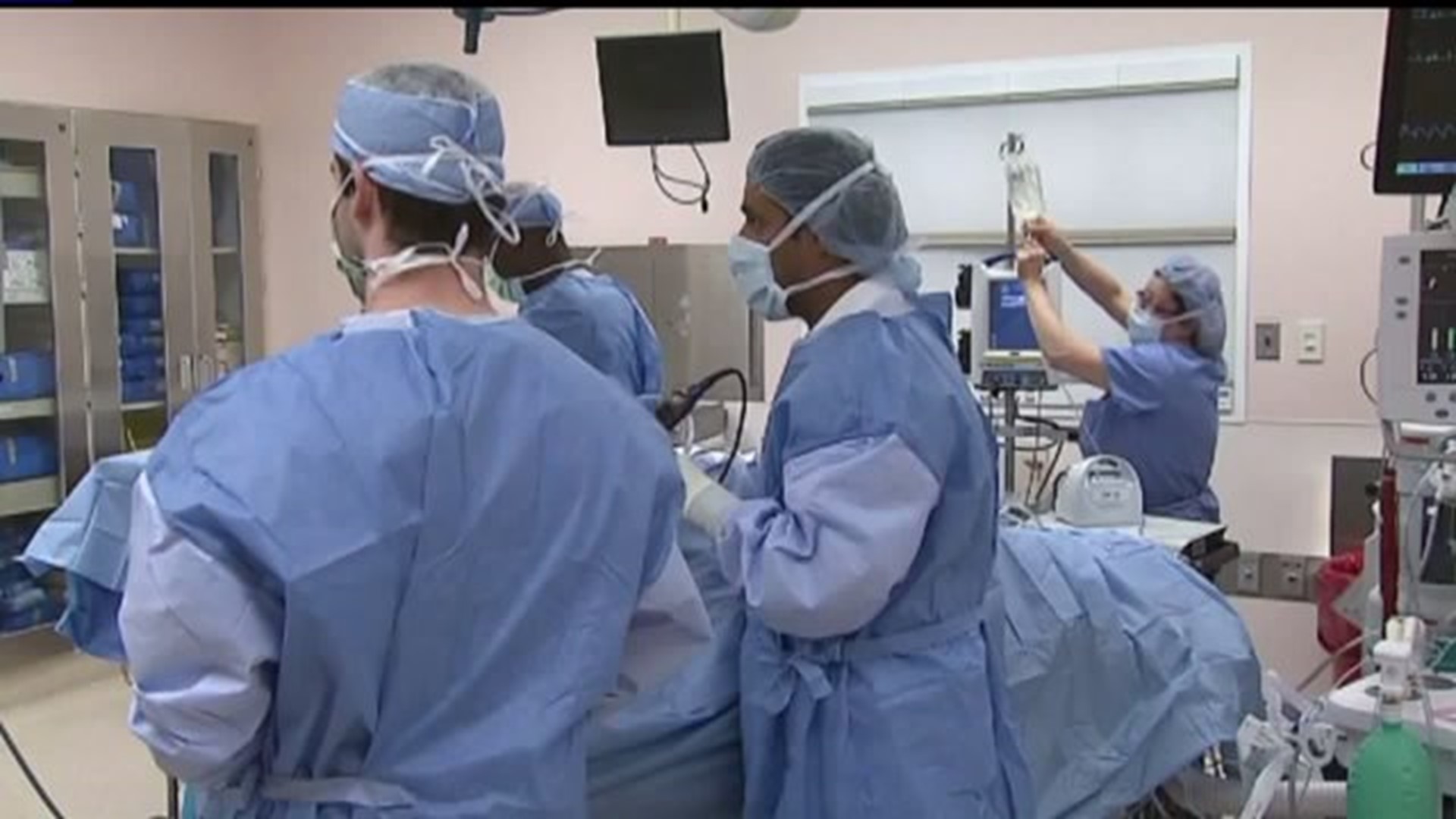 YORK, Pa.--Approximately 1,300 open-heart surgery patients at WellSpan York Hospital have been notified after the facility announced Monday they are working with the state Department of Health and the U.S. Centers for Disease Control and Prevention (CDC), after finding a small number of extremely rare bacterial infections in certain open-heart surgery cases at the hospital.

The CDC has linked these bacterial infections to the heater-cooler devices used during these surgeries. The hospital replaced its heater-cooler devices with new equipment in late July 2015 and is advising current patients that there is no longer a risk of this bacterial exposure, according to a news release from WellSpan York Hospital.

According to federal health authorities, the bacterium – a nontuberculous mycobacterium, or NTM – is commonly found in nature, including soil, water, and even tap water. Although it typically is not harmful– in some rare cases – it can cause infections in patients who have had invasive healthcare procedures, especially in people with weakened immune systems.

At WellSpan York Hospital, this infection has been identified in less than 1 percent of patients who had open-heart surgery during this period, according to a news release.

"We know that the news of this potential risk of infection may be concerning to our open-heart patients, and we sincerely regret any distress that it may create for those patients and their families," said Keith Noll, senior vice president of WellSpan Health, and president of WellSpan York Hospital. "We are committed to ensuring our patients have all the information, care and treatment they need regarding this issue."

No physicians, clinicians or staff were, or are, at risk for this infection; the highest risk is believed to be limited to patients who underwent open-heart surgery at WellSpan York Hospital within the past four years, up to July 24, 2015. Patients who had other, noninvasive heart procedures – such as stents, pacemakers, defibrillators and ablations – are not at risk, the hospital said.

This bacterium is not contagious, and the infection can usually be treated successfully once identified, according to hospital officials. However, because NTM is a slow-growing organism, it can take up to several months for it to develop into an infection, and years before the infection is correctly diagnosed unless patients and their clinicians are alert to the possibility of NTM infection.

"The safety, health and well-being of our patients is always our highest priority," Noll said. "That is why we took this very seriously and immediately notified state and federal health officials and requested their assistance and guidance."

A study published in July 2015 in the journal, Clinical Infectious Diseases, based on evidence from patient cases in Europe, alerted WellSpan York Hospital infectious disease specialists to a previously unknown risk of infection through aerosolized NTM bacteria escaping from the heater-cooler devices that are used during open-heart surgery. The European study indicated that the bacteria could pose a risk to patients who are on heart bypass machines with heater-cooler devices during surgery.

A short time after the study was published, WellSpan York Hospital staff became aware of several surgery patients with NTM infections of the type identified in the study and immediately contacted the Pennsylvania Department of Health (DoH), which subsequently engaged the Centers for Disease Control and Prevention (CDC). Hospital staff worked collaboratively with the CDC and the DoH to conduct an extensive review of all the hospital’s open-heart surgery cases in the at-risk group to confirm the source of the bacteria and take preventive steps to protect patient health.

“Based on our joint investigation, the CDC determined that the NTM infections identified in our patients are likely linked to the heater-cooler devices, paralleling the findings of the European study,” said Dr. R. Hal Baker, an internal medicine physician and WellSpan Health’s senior vice president for clinical improvement.

Four of the patients in this group, who all had complex medical conditions, are now deceased. While the CDC has not directly linked the deaths of these individuals to the NTM infections associated with the heater-cooler devices, it is likely a contributing factor.

Hospital officials and physicians made personal phone calls to all patients who have acquired an NTM infection, and the family members of those who are now deceased, to notify them about these infections and to offer any additional information, treatment or care they may need, Noll said.

In addition, WellSpan York Hospital sent letters to approximately 1,300 patients who may have been exposed to this bacteria during their open-heart surgery procedure within the past four years. The letters encourage those patients to consult their primary care physician who can help them monitor their health and identify any new symptoms that could be associated with a possible NTM infection – particularly within four years following the date of their most recent open-heart surgery at WellSpan York Hospital.

“If, during that time, a patient is found to have a confirmed infection that is linked to this bacterium, WellSpan will provide them with the treatment required for this infection,” Noll said.

WellSpan York Hospital has also been in contact with area physicians and advanced practice clinicians, briefing them on the situation and providing guidance in the monitoring and care of patients who have been exposed to the bacteria.

Immediately upon consultation with the DoH and the CDC, WellSpan York Hospital completely replaced its heater-cooler devices with new equipment in late July 2015.

Additionally, an internal review conducted by the hospital identified that its cleaning protocols for the heater-cooler devices did not align perfectly with the original guidelines provided by the device manufacturer. The manufacturer recently alerted customers across the United States of enhanced cleaning procedures to address NTM contamination concerns.

“The new equipment is being meticulously maintained according to the enhanced cleaning procedures,” Noll said. “Patients can have full confidence that the hospital fully complies with the highest standards of disinfection and maintenance.”

Noll noted that WellSpan York Hospital has consistently scored at or above the state and national rate for surgical care and infection prevention and ranks in the top 10 percent of all hospitals in Pennsylvania in surgical care, according to the Pennsylvania Health Care Quality Alliance.

Federal health authorities believe this device issue may be widespread across the country and have issued health advisories to hospitals nationally in an effort to prevent these infections. European hospitals also have reported infections tied to the heater-cooler devices.

The CDC and the U.S. Food and Drug Administration have each recently issued safety advisories, alerting health care providers about the potential link between NTM bacteria that can grow in heater-cooler devices and NTM infections in open-heart surgery patients.

“While it is still unknown whether other U.S. hospitals using similar equipment during open-heart surgery may also have patients with bacterial infection, our work with the DoH and the CDC provides a template for other hospitals to follow in identifying and addressing this possible potential risk to patients,” said Noll. “It is our hope that the work that WellSpan York Hospital and the CDC have completed together will prevent bacterial infections in other patients across the United States.”