“I mean, I can still remember it to this day, white snow with all my red blood on the snow. That was very contrasting and that sticks in my mind,” s... 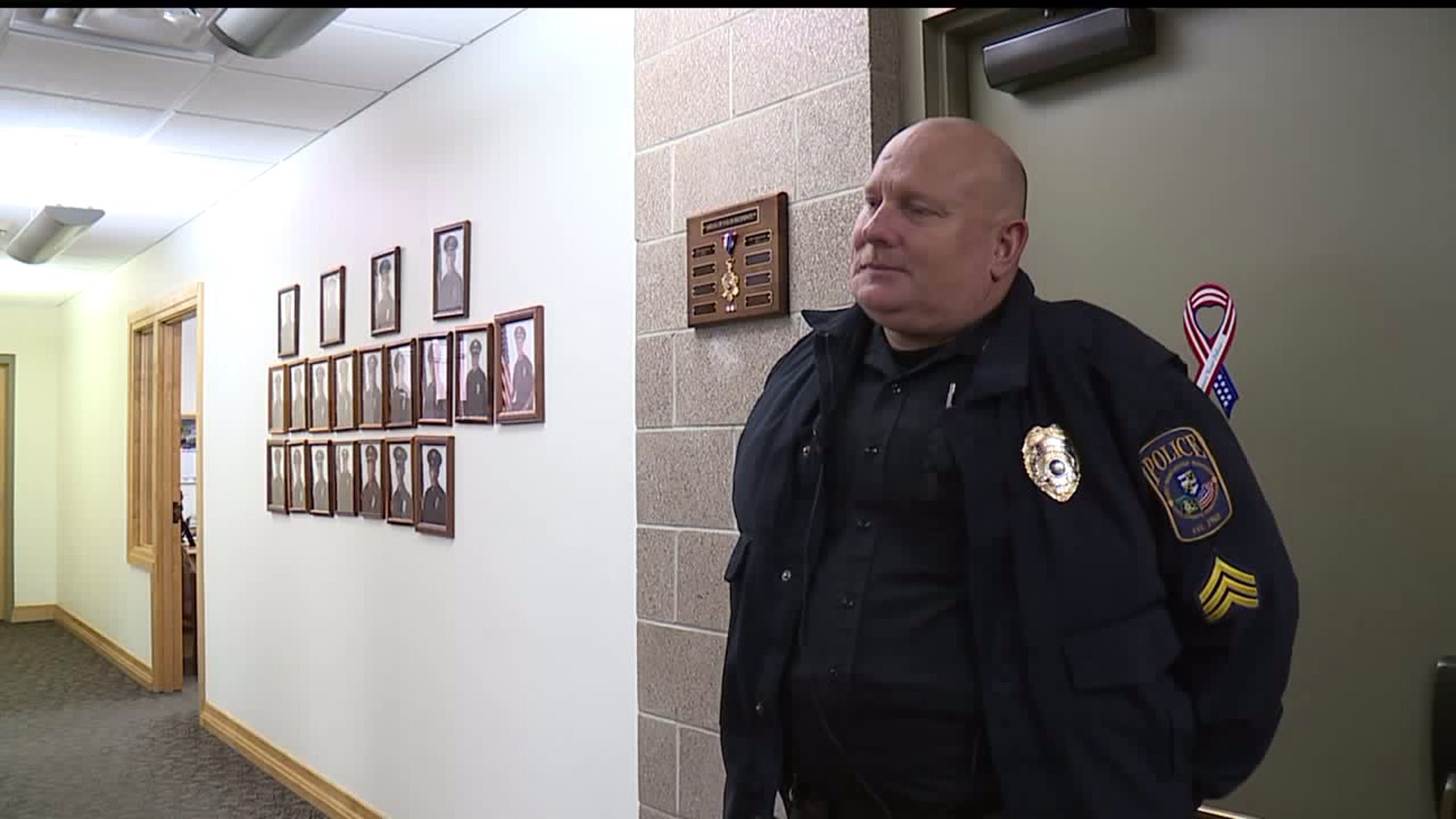 "I mean, I can still remember it to this day, white snow with all my red blood on the snow. That was very contrasting and that sticks in my mind," said Sergeant Pat Hinds.

Sgt. Hinds was shot in the jaw while responding to a domestic call in York County.

Many argue that his zest for life is what brought him back to the Manchester Township Police department so quickly.

The incident not only showed the strength of a fellow officer, but it taught the police force a life lesson.

We followed the 32 year police veteran around during a night of patrol... a much slower night than what he's experienced in the past.

"It was December 21, 1995 and we had snow on the ground, and I heard somebody opening windows at the back of the house." said Sgt. Hinds.

Sgt. Hinds was responding to a domestic dispute in the township.

He knew a man was inside the house with a gun and the man's children were inside, too.

At the time, they were waiting for backup from another part of the state.

Sgt. Hinds and his team had established a perimeter and were looking around to make sure the man had not escaped.

That's when he was shot, blindsided by a .338 caliber rifle.

"It took me a moment or two to realize what was happening because everything was happening so fast. I hit the ground. It's like getting sucker punched almost and I didn't hear the report of the rifle until I was actually on the ground," said Sgt. Hinds.

"We heard somebody screaming and I couldn't identify who it was," said West Manchester Township Police Chief, Arthur Smith.

Chief Smith remembers the scenario all too well.

"I remember him saying on the radio that he just opened a window and it was 'heads up, you know.. watch yourselves' and shortly after that there was gunfire," said Chief Smith.

Miraculously, Sgt. Hinds returned fire before other officers reached him and brought him to safety.

During those crucial moments, Hinds doesn't remember any pain despite a shattered jaw.

He was focused on surviving.

"You don't want to roll over and die if you don't have to and that's just my personality I guess," said Sgt. Hinds.

It's also in his personality to find humor during hard times.

"The doctor comes in and he says hey we have to give you a rectal exam and I looked at him and said doc I got shot in the face not the rear end and the nurses started bustin' up laughing! And the last thing I remember is the doctor saying 'ok put him under!'" laughed Sgt. Hinds.

12 surgeries in all, he's already had 2 more this year.

His recovery is detailed in a scrapbook.

Headlines which read, "You're not going to stop him" and "A good cop with a big heart" remind him of the community that rallied for his return.

Pictures show a feeding tube, stitches and a jaw wired shut... some are hard to look at.

"I mean everybody has their down times, there's no doubt about it - life is always - you always have peaks and valleys," said Sgt. Hinds.

The Chief visited him in the hospital and was struck by his perseverance.

Chief Smith as well as Hinds, credit his time served in the Army as a reason why he fought so hard to come back.

Sgt. Hinds' story has taught the force a valuable lesson that anyone can relate to.

"You don't go out angry and upset with each other you square it before you leave the back door. Because when you go out... you may never ever get to say I'm sorry for what I did to you or anybody else," said Chief Smith.

Besides that message, Hinds also taught his fellow officers what it means to wear blue.

"He's one of those guys that you can trust and you can count on on the street and he's a worker. His drive, his dedication, brought him back and it made him a better person," said Officer Keith Roehm, a close friend of Sgt. Hinds.

Despite the praise, pain and scars, Sgt. Hinds says what happened in December of '95 doesn't make him any different.

"It doesn't mean that I'm special or anything like that... if you can still breathe and see, you can still fight," said Sgt. Hinds.

The man who shot Sgt. Hinds killed himself shortly after shooting Hinds.

His wife had a protection from abuse order against him.

Right now, there are bills circulating in the Pennsylvania Legislature that could potentially protect officers responding to domestic abuse calls.

Senator Tom Killion from Delaware County presented a proposal earlier this year that looks to keep guns out of the hands of those convicted of domestic violence offenses and those with PFA orders against them.

The bill would require all PFA subjects to turn over their firearms to law enforcement officials or a registered gun dealer within a 24 hour period.

The West Manchester Township Police Department did not comment on this specific bill, but officers have told FOX43 that they support efforts to protect local law enforcement.