LAWN, Pa. – When Emily Whitehead was five she was diagnosed with Leukemia. She began treatment at Penn State Hershey Children’s Medical Center. Emil... 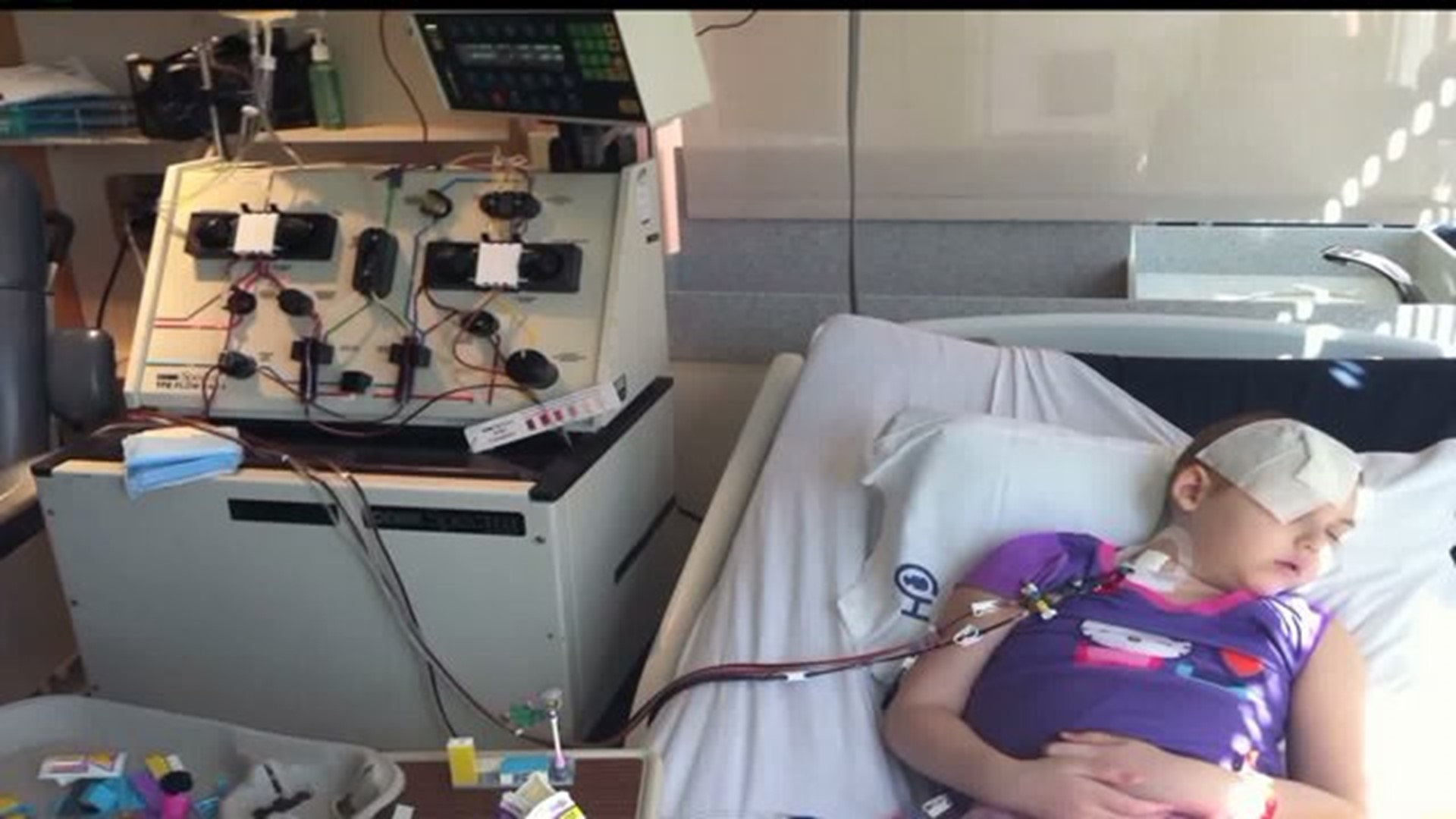 LAWN, Pa. - When Emily Whitehead was five she was diagnosed with Leukemia. She began treatment at Penn State Hershey Children's Medical Center. Emily relapsed twice.
"So she just happened to be in that 10% that relapsed. That chemotherapy didn`t work for," said Emily's mother, Kari.

"We finally had our doctor, at Hershey, come in and say we don`t have any more weapons to fight Emily`s cancer and if you would like we could set-up hospice," adds her father, Tom.

Not ready to say goodbye, the Whitehead's transferred Emily's care to the Children's Hospital of Philadelphia where she had the opportunity to be the first child to participate in a T-Cell based trial.
"We are basically genetically engineering those T-Cells so that they can actually find and kill cancer cells in the patient`s body," said researcher and oncologist Dr. Stephan Grupp.

Dr. Grupp explains a patient's blood is filtered giving the doctors the cells they want.

"That goes to a lab that it actually does the genetic modification to the cells. We use a virus for that purpose. It`s a crippled form of the HIV virus. It`s not given to the patient and it can`t cause disease, but it can make the change in the cells that we need," explains Dr. Grupp.

Now trained, to fight cancer, the cells are put back in a patient's body.
"What we have learned is when we put these cells in they have to grow so they can attack all the leukemia. And what we have learned is in patients that have a lot of leukemia, which unfortunately Emily did, those cells really grow to a significant extent and they kill all the leukemia and in the process the patient can get quite sick," says Dr. Grupp.

Emily nearly died. Her family says they held onto their faith.

"We have learned a way to treat this that no one had ever tried before. We tried it in Emily and it worked enormously well and I would say actually her experience has saved lives all over the world," said Dr. Grupp.

Emily is now four and a half years cancer free and thriving. She has to get B-Cell treatments every two weeks and go for check-ups every six months, but other than that does not go through any treatment.

Since her success, more than 100 kids have gone to CHOP for the treatment and Dr. Grupp says 90% have gone into remission. It has also been successful in adults.

They are in the final stages of having it FDA approved. For more on the treatment and the cost visit here.

To be sure other families can receive the same care the Whiteheads did they have started the Emily Whitehead Foundation.

On November 5, at the Lawn Fire Company, there will be a five mile race. A portion of the proceeds will go to the foundation and the other part will go to the Leukemia and Lymphoma Society of Central PA.