Pennsylvania Divided: Gerrymandering in the Commonwealth 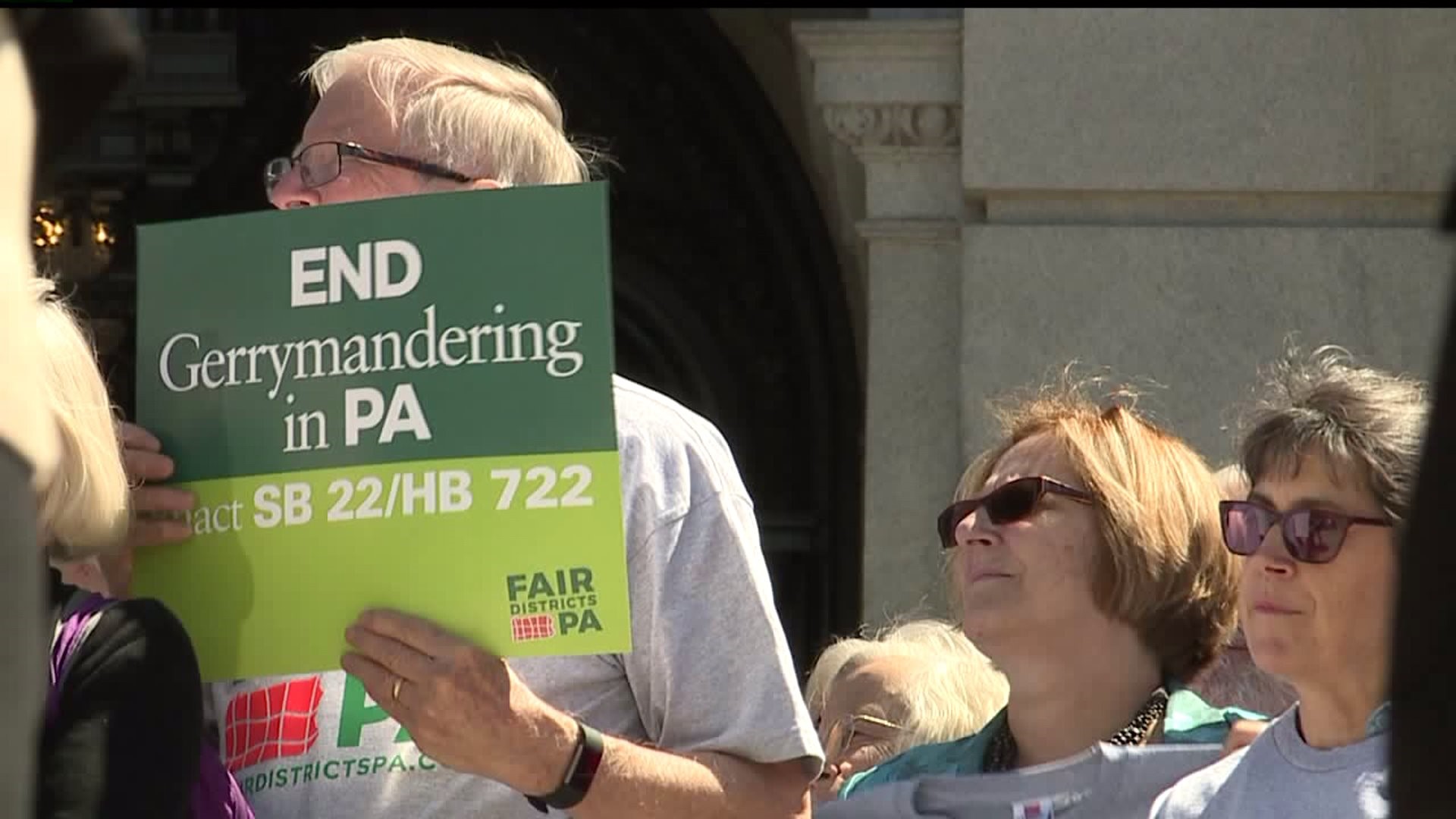 Four years earlier, the State Senator from Susquehanna Township in Dauphin County surprised years of Republican establishment, becoming the first Democrat in the 71 year history of the 15th District to win the seat. After his victory in 2012, his district was redrawn, although his confidence never wavered.

Leading up to the November 2016 election, Teplitz was mired in a hard campaign with local businessman John DiSanto. The two traded barbs, and sometimes insults throughout the campaign. On election night, as Teplitz's supporters watched results come in at the Harrisburg Midtown Arts Center, a spokesperson told the anxious crowd that the Senator was feeling so good about the pending results, that he had opened up a bar tab for anyone to get a drink on him.

His campaign numbers were wrong. By the end of the night, DiSanto defeated Teplitz by 4,183 votes.

Teplitz was stunned, telling reporters that night, "If I lost, I am willing to concede, but I have tremendous lack of confidence after what I saw today."

He conceded to DiSanto the next afternoon.

Democrats statewide, led by Sen. Daylin Leach (D-Montgomery), who at the time was the chairman of the Senate Democratic Campaign Committee, argue Teplitz's loss was the result of a process called gerrymandering.

"THEFT OF VOTES IN PENNSYLVANIA"

Gerrymandering is the act of redrawing district lines to favor one political party over the other. While Democrats in Pennsylvania say they are the victims of the Republicans' gerrymandering, other states, such as Maryland, are considered some of the worst drawn districts in favor of Democrats. Gerrymandering works both ways, for whoever has the majority of the power in state government.

"It is essentially political corruption and the theft of votes in Pennsylvania," Leach said.

Gerrymandering has been around for almost as long as the United States. In 1812, Elbridge Gerry, then the governor of Massachusetts, drew a state senate district in favor of his Democratic-Republican party. A federalist newspaper claimed it looked like a salamander. The paper said the district was "gerrymandered."

However, currently there are more registered Democrats to Republicans: 4,050,588 to 3,235,400. Congressional redistricting, which happens when the U.S. Census is released every 10 years, lies in the hands of the General Assembly. Since the Republicans control the House and Senate, the results are able to favor the GOP.

"You guarantee yourself control," Leach said. "Even though Democrats have more votes state wide for the state senate, there is a wildly disproportionate representation."

However, two nonpartisan studies agree Pennsylvania ranks among the worst in the country in terms of drawing district and congressional boundaries. The Harvard-based Electoral Integrity Project listed Pennsylvania as its fourth-worst ranked state in terms of its lines, in front of North Carolina, Wisconsin, and Ohio. New York University's Brennan Center for Justice released a report in May which listed Pennsylvania, North Carolina, and Michigan as three states which "consistently have the most extreme levels of partisan bias."

The Pennsylvania 7th Congressional District is often considered one of the worst drawn nationwide. It stretches through five counties. The Washington Post once nicknamed it "Goofy kicking Donald Duck."

"Can there be arguments that one side is using it to their advantage? I think you could do that," said Republican State Senator Mike Folmer, chairman of the Senate State Government Committee.

Since first getting elected to the Pennsylvania General Assembly in 1994, State Senator Lisa Boscolla (D-Northampton, Lehigh) has worked on legislation involving redistricting reform.

Boscolla has never succeeded in getting redistricting reform through. This session, however, she's hoping bipartisan support in her bill will help convince other Republicans.

"No county should be cut up to look like it was drawn up in crayon in the year 2000," Scavello recently said at a rally in support of his and Boscolla's bill.

"I'm not saying Democrats wouldn't do same thing, it's just that Republicans have controlled this for about 30 years now and you see these Democratic districts are going away," Boscolla said.

SB 22 would create an independent commission made up of Pennsylvania citizens which would be in charge of drawing lines for all political positions: House, Senate, and Congress.

Boscolla envisions a dynamic where 500 people apply to be part of the commission, which would then get narrowed to around 100 qualified candidates through a selection process. From there, Democrat and Republican leaders would cut a handful of possible candidates out of the pool, similar to a jury selection.

Eventually, 11 citizens would get chosen at random to serve on the redistricting panel. Boscolla sees it as four registered Democrats, four registered Republicans, and three registered Green Party and Independent

"The people have to demand this change in their government," Boscolla said. "It only works when they participate."

The bill has been referred to Folmer's State Government Committee. In the past, he did not take up Boscolla's redistricting reform bills. He says now, that may change.

"This committee is going to look at these issues in a very sincere way. No one is going to be giving anybody the 'Harrisburg Heisman," Folmer said.

"Whether you agree or disagree, it's a good thing when Pennsylvanians get involved in their government."

Despite the bipartisan support for SB 22, it faces an uphill and arduous road in two Republican majority chambers. Boscolla admits, "Legislators benefit from this type of gerrymandering, so to get them to change is hard."

Even if it gets through the Senate, it would likely get referred to the House State Government Committee, whose chairman, Daryl Metcalfe, feels redistricting reform is a "back-burner issue."

"The majority of Pennsylvanians don't believe there is a problem in my estimation," Metcalfe said.

Even if there was, Metcalfe says, it is his belief, and he says the belief of other legislators, that citizens elected them to make these decisions for them, and not the other way around.

"I think just upending and saying we'll have an appointed group of people versus elected people making decisions for the group of people that elected them is the wrong direction," Metcalfe said.

"WE COULD REALLY GET SCREWED"

Even if Senate Bill 22 stalls, the results of a recent election could impact the way lines are drawn, at least within the commonwealth, for years to come.

Currently, State House and Senate lines are drawn by the Legislative Reapportionment Commission. According to the Pennsylvania Constitution, the committee consists of a five-member panel; caucus leaders in the House and Senate, and a fifth member to serve as the commission chair. If the leaders cannot agree on a fifth person, the Supreme Court appoints a chair.

With the current lines, Republicans have enjoyed historic majorities in both chambers; 112-81 in the House, and a veto-proof 34-16 majority in the Senate. However, Democrats could hold a key edge in the near future. When the LRC next meets to draw state district lines after the 2020 U.S. Census, Democrats, as a result of the 2015 election, will hold a majority on the Pennsylvania Supreme Court for the first time since 1990.

"Republicans could be thinking, 'Suppose they appoint a person who is as partisan as the person we've appointed. We could really get screwed,'" Leach said. "The GOP is in a bad position now."

When the next census is released in 2020, the Pennsylvania General Assembly is still expected to be led by the GOP. However, a Democratic governor could, in theory, veto any line proposals in the hopes of working towards lines more favorable for Democrats.

Sen. Leach says the results of the next gubernatorial election are so important, he estimates a win for Wolf would take Congressional seats from a Republican majority 13-5 to an even 9-9, not counting any seats taken away by a population decrease.

"I could flip eight Congressional seats without one person changing their vote," Leach says. "So how relevant are the voters?"