Papenfuse’s ‘Primary’ Problem: “Reaching across the street” to voters

HARRISBURG, Pa. — As Mayor Eric Papenfuse walked into his victory party at the Midtown Scholar bookstore Tuesday night, there was little to celebrate. Pap... 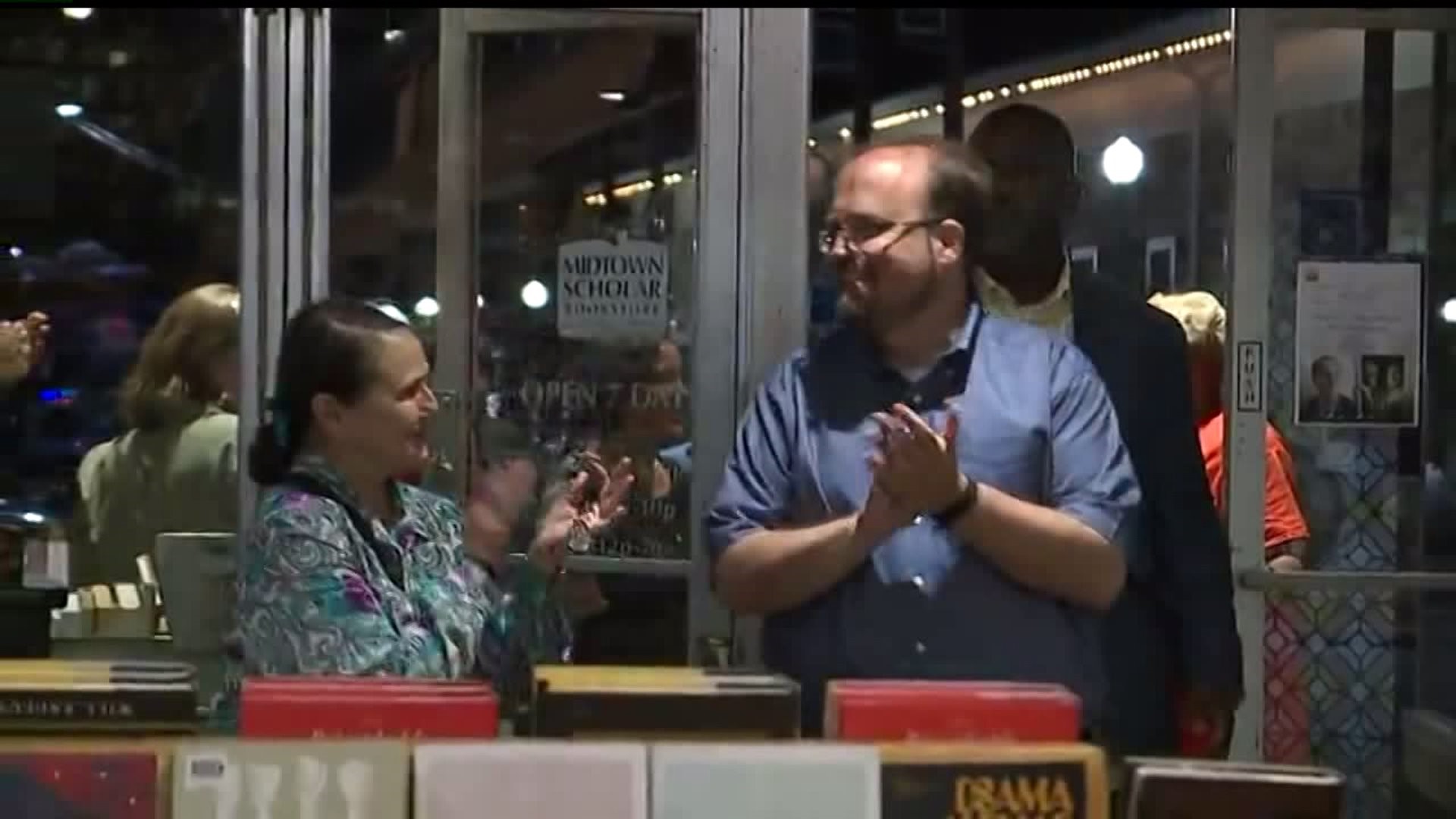 HARRISBURG, Pa. -- As Mayor Eric Papenfuse walked into his victory party at the Midtown Scholar bookstore Tuesday night, there was little to celebrate.

Papenfuse edged Democratic challenger Gloria Martin-Roberts by a vote of 2,663 to 2,048 in Harrisburg's mayoral primary election. He failed to gain a majority of the vote, and defeated Martin-Roberts, a former city council president, by a lesser margin than he beat incumbent Mayor Linda Thompson in 2013.

"We are a more divided city and this is something which troubles me deeply," he said. "I think I have to redouble my efforts to make sure every person in the city understands the vision I have is an inclusive one for the good of all."

Harrisburg's evident electorate fracture was further exemplified by Martin-Roberts, who told PennLive after conceding the loss, "if they have decided they want another term of misery, then fine."

Papenfuse said Tuesday he was planning on contacting Martin-Roberts on Wednesday. FOX43 reached out to Martin-Roberts' campaign multiple times, but calls were never returned.

While Papenfuse expectedly carried neighborhoods in Midtown and Olde Uptown Harrisburg by nearly 67% of the vote, voters in Uptown and Allison Hill showed up overwhelmingly for Martin-Roberts.

A man who went by the alias 'Minister 50' said there is a perception that Papenfuse doesn't care about those neighborhoods as much as others, like Midtown, where he operates a business. He said Martin-Roberts had a better connection to parts of the city which needed more leadership, as well.

"She was connected to the plight of the average citizen in Harrisburg for years," he said. "(Papenfuse) need to be reaching across the aisle, even across the street, to make his presence felt by those who didn't vote for him."

In Allison Hill, dozens of lawn signs for myriad candidates still sat pitched in front of the Unitarian Church beteween 15th and 16th Streets, a day after the election. However, not a single sign endorsed Eric Papenfuse for reelection.

"We're like this broken, fractured community that's been neglected for so long," said Michelle Blade, resident of South Allison Hill.

Blade even voted for Papenfuse; his campaign sign still proudly sits on her porch. She doesn't believe all the issues facing the city are necessarily his fault. Those issues, she says, are systemic against the lower income, disenfranchised residents in Allison Hill.

"You try to get to the mayor or anyone who has the power to help you and all the doors basically get slammed on you here (in Allison Hill)," Blade said.

Voters say the message to Mayor Eric Papenfuse is loud and clear: He needs to do a better job including all city residents. The mayor, for his part, admitted such after Tuesday's election. Residents like 'Minister 50' and Michelle Blade separately agree that maybe instead of waiting on Papenfuse to do all the work, perhaps they should meet halfway.

"What can you do for your city?" 'Minister 50' asks, paraphrasing John F. Kennedy's famous inauguration speech. "Not necessarily what can your city do for you?"