HARRISBURG, Pa. — All eyes were on Pennsylvania’s State Supreme Court as it released its own version of a new congressional map for the commonwealth, Monday. Ne... 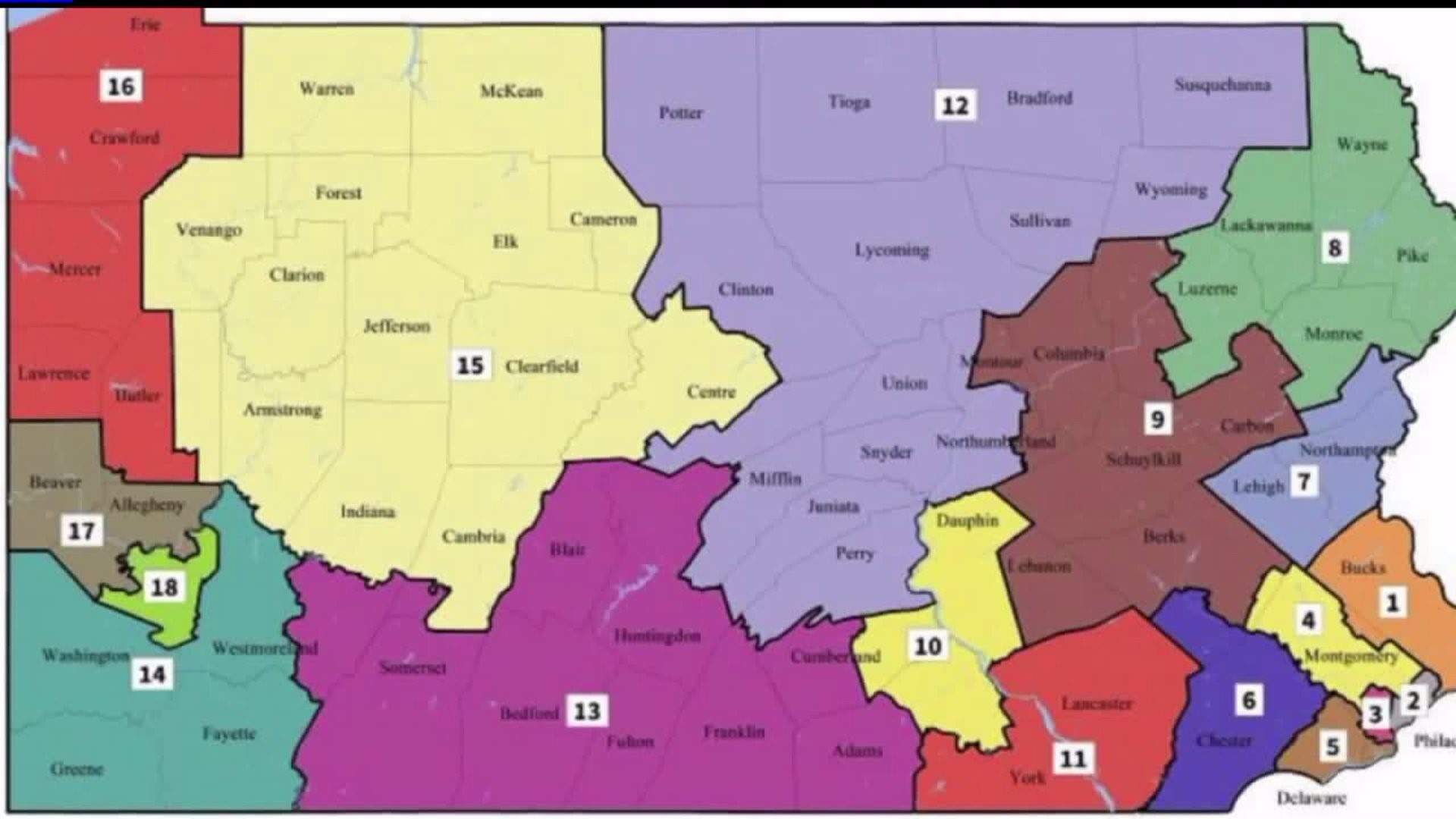 HARRISBURG, Pa. — All eyes were on Pennsylvania’s State Supreme Court as it released its own version of a new congressional map for the commonwealth, Monday.

Nearly a week ago, Governor Tom Wolf rejected the map submitted to him by state Republican leaders. That in turn, put the map-making process in the hands of the State Supreme Court.

While the wait for a new map is over, the gerrymandering debate with the State Supreme Court may not be.

The Pennsylvania State Supreme Court prepares to put an end to the state’s gerrymandering case by releasing its own congressional map.

Dickinson College assistant professor of political science David O’Connell said “any map that is redrawn in a fair way, is going to result in less of a partisan advantage for the Republican Party since the state is objectively drawn in favor of the Republican Party. So, Republicans should be unhappy.”

A new map doesn’t completely guarantee Democrats would be happy either.

“The geographic distribution of votes for democrats in the state tend to be concentrated around the two major metropolises, at the ends of the state, Republicans do much better throughout the wider central Pennsylvania region,” O’Connell said.

O’Connell explained that even in a state with more registered Democrats, the Democratic Party still might not come out on top.

“A fairly drawn map that takes into account, all of the other considerations we might have in terms of what we want out of legislative districts, isn't necessarily going to be a map that translates to 50 percent of the vote equaling 50 percent of the seats for the Democrats,” O’Connell said.

Meanwhile, the wait for a new map to replace the hotly contested 2011 map, also makes for a complicated situation for both voters and candidates.

“It would have been sensible for the court to at least delay the decision through the primaries, if not through the 2018 mid-term election, because usually redistricting is done in a very orderly and methodical way,” O’Connell said.

“You have candidates who might want to run for Congress and their not sure what district they`re going to be in, and that district could change today, it could then change even further in the future depending upon what might happen with additional challenges,” O’Connell added.

One challenge could be for Republican state leaders to take the case to the U.S. Supreme Court. O’Connell points out the Federal court has been reluctant to get in the middle of state court decisions.

“The fact that they already declined an opportunity, to take action on the Pennsylvania case, I think is a strong indication that they’re unlikely to do so in the future,” O’Connell said.

“They legitimately feel that this is not the court’s role, that the constitution is very clear, that state legislatures are responsible for our legislative boundaries, and for the court to step in and impose its own map, I think Republicans feel is improper,” O’Connell said.

The new map will take effect in the May 15 primary election. Though, Republican lawmakers are expected to challenge it in federal court.

“Over the last month, I have personally heard from thousands of Pennsylvanians and they are sick and tired of gerrymandering, which perpetuates gridlock, alienates citizens and stifles reform. I have stood for fairness and rejected a proposed map that was universally seen as another partisan gerrymander. I applaud the court for their decision and I respect their effort to remedy Pennsylvania’s unfair and unequal congressional elections.

“Implementation of this map would create a constitutional crisis where the Pennsylvania Supreme Court is usurping the authority of the Legislative and Executive branches.  We anticipate further action in federal court.

“This entire exercise, while cloaked in ‘litigation,’ is and has been nothing more than the ultimate partisan gerrymander – one brought about by the Democrat Governor acting in concert with liberal politically-connected litigants.

“The League of Women Voters maintains that it filed this suit in order to take partisan politics out of the Congressional redistricting process. This map illustrates that the definition of fair is simply code for a desire to elect more Democrats.”