ONLY PA: A look inside the Pennsylvania State Police Academy

DERRY TOWNSHIP, DAUPHIN COUNTY, Pa. — Pennsylvania is known for many firsts one of which is built on more than one hundred years of tradition: the Pennsyl... 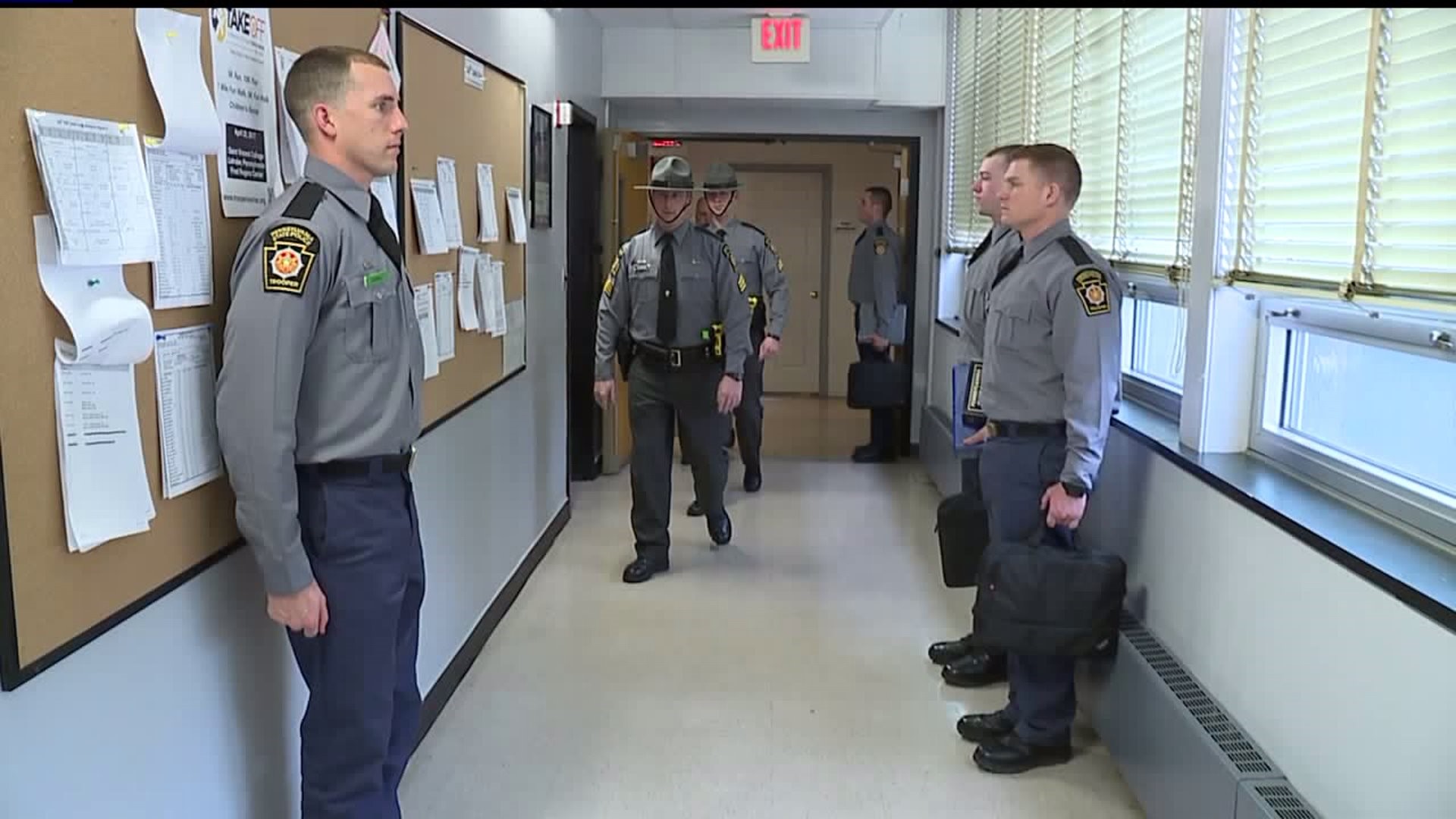 DERRY TOWNSHIP, DAUPHIN COUNTY, Pa. -- Pennsylvania is known for many firsts one of which is built on more than one hundred years of tradition: the Pennsylvania State Police.

The organization celebrates its 112th anniversary this May.

Through the doors of the Pennsylvania State Police Academy walks more than one hundred years of tradition.  Except the main doors are reserved only for those who've earned the title of trooper.

Cadet Logan Brouse said "the State Police is huge on tradition. Everything we do here is for a purpose."

Pennsylvania State Police Cpl. Adam Reed said "much like many other things here at the Academy, the privilege to use those doors is something the cadets have to earn, and they earn that upon graduation."

It's what the cadets have their sights on. The challenge, getting through the Academy and meeting the approval of basic training supervisor William Langman.

Pennsylvania State Police basic training supervisor William Langman said "basically we instill upon the cadets, when they come in that they're to conduct themselves in a professional, disciplined manner, with military bearing."

"Intense, both challenging mentally and physically. It's long days here. You're up early in the morning, going to bed late at night," Brouse said.

Cadet training doesn't stop when they go to bed.

"The beds are only allowed a hangover of the bed rail of approximately two inches. This right here, this distance is actually measured with a ruler for inspections," Langman remarked.

Cadet Raven Matulevich said "there's a lot of attention to detail. You have to be timely, you have to be considerate of other people. Overall, very, very challenging."

Earning the uniform involves a physically demanding and highly regimented program that includes everything from learning how to handle a firearm, to how to conduct themselves.

"As we were walking through, you saw the cadets stopping, coming to attention, when they notice me, and basically that's a simple exercise in teaching them to be aware of their surroundings," Langman said.

That lesson is to be learned and utilized within the halls of the Academy and beyond.

"Here, they're allowed to be caught. Out on the road, they don't have that opportunity. A slip up on the road can mean their life, or your life or my life," Langman said.

A memorial wall serves as a tribute to troopers killed in the line of duty.

It's tradition for all who pass it to pay their respects.

There are 97 troopers who've lost their lives since the beginning of the Pennsylvania State Police.

Pennsylvania State Police Sgt. Retired Michael Chaplin said "we were founded as a direct result, really, of the Great Anthracite Coal Strike, which occurred in the northeast seven counties in the state in 1902."

Three years later, that incident gave the governor at the time a unique idea.

"The first uniform state police in the country," Chaplin said.

At the Pennsylvania State Police Historical Center, located next door to the Academy, visitors can see how the PSP have been the leading the pack ever since.

"The precursor to several other state police departments being formed, New York state police in 1917, New Jersey in 1921, all patterned themselves after us," Chaplin said.

More recent history includes a cheating scandal, which gave those looking for an easy way out at the Academy, a way out the door.

"Those that were involved were dismissed or they voluntarily left on their own accord. The department goes back to 1905, there's a lot of really great tradition, and really great history. It's up to us as the current members of the department to keep that going, and keep that moving forward," Reed said.

The Academy is no place for cheaters or quitters.

"If they leave on their own accord, as in they quit, they quit, they're not coming back here. This was the one shot they were given. There is somebody there who basically wants their spot," Langman said.

Recently, there were 7,000 applications for only about 150 openings.

"Right now, the department does have a lot of members who either are now, or are about to be eligible to retire. So, it's incumbent upon us to find the best and brightest cadets to come in here and fill those ranks," Reed said.

"There are no other women in my family that have gone into law enforcement, so I think I surprised quite a few people," Matulevich said.

"The last 24 weeks have been been intense as I said," Brouse said.

"It's challenging, but it's not impossible," Langman said.

"The Academy and the department are very steeped in history, and I'm proud to be a part of that," Reed said.

Many walk in the academy as a cadet, while the successful walk out as a trooper.