CARLISLE, CUMBERLAND COUNTY, Pa. — Thousands of students have or plan to walk out of to protest gun violence following a deadly school shooting in Parklan... 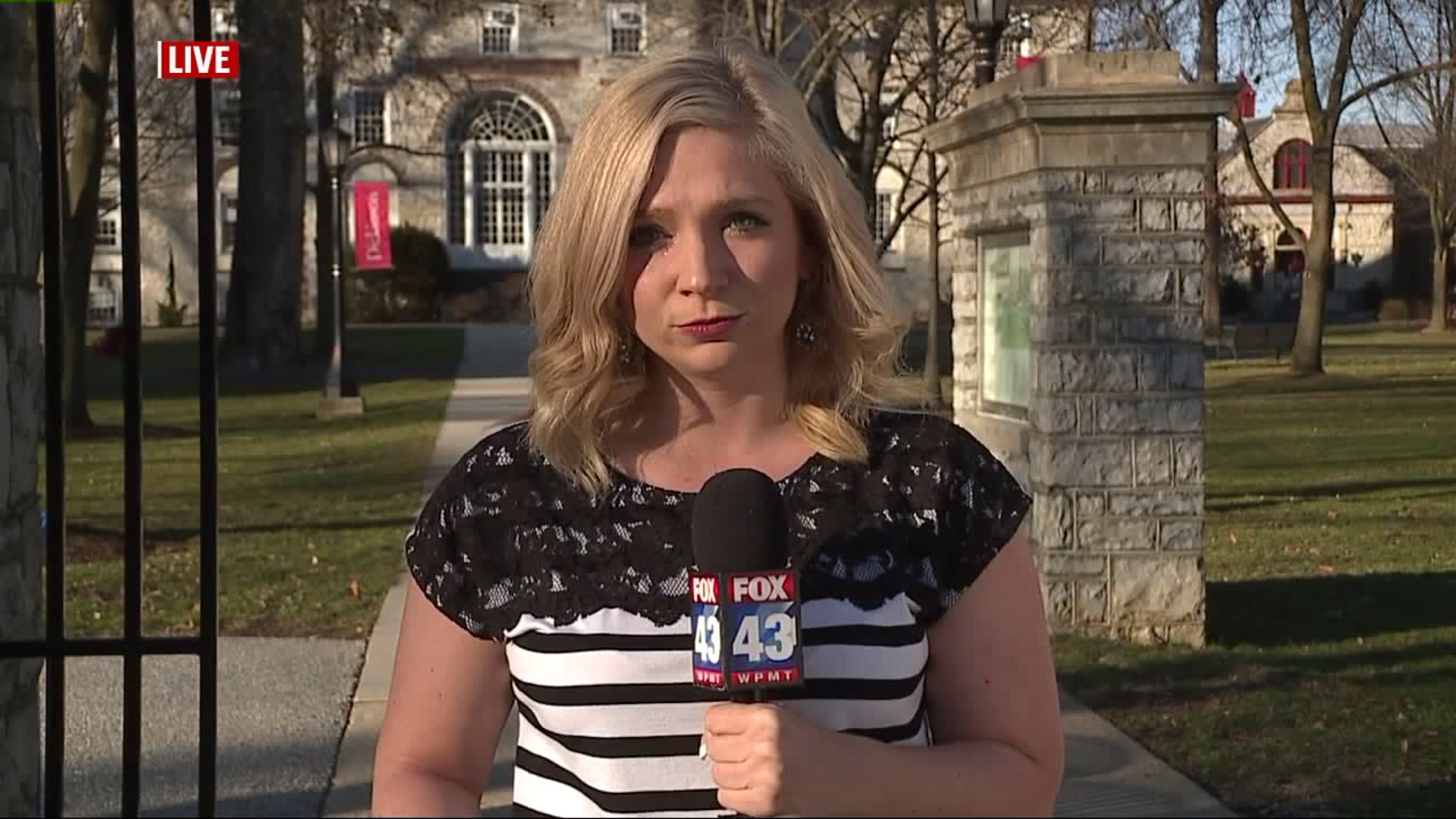 CARLISLE, CUMBERLAND COUNTY, Pa. -- Thousands of students have or plan to walk out of to protest gun violence following a deadly school shooting in Parkland, Florida school shooting.

"If a student’s school chooses to discipline them, suspend them, or otherwise punish them for participating in a protest, we would not penalize them in our admission process," said Dr. Stefanie Niles, the Vice President of Enrollment.

So long as students remain peaceful, they are free to debate and protest on Dickinson’s campus too, a freedom not taken lightly by some students.

“I would want to protest that! Yeah, I don’t think that’s right," said Reilly Brown, a senior.

“I strongly believe in free speech, and if someone is trying to get rid of your free speech rights, I think that’s unconstitutional, and I think there needs to be some kind of protest to that," said Titus Manetta, a freshman.

Some schools have decided to penalize students for walking out of class, prompting the American Civil Liberties Union to send this tweet at students, saying: "Your school can punish you for missing class, just like they always can. but it can’t punish you more harshly for protesting than if you were missing class for another reason. #KnowYourRights.."

As for the age of students engaging in protests, some say it shouldn’t matter.

“Their opinion very much matters. They’re the next generation to lead us into whatever comes next," said Manetta.

FOX43 contacted a number of higher education institutions in Central Pennsylvania. Here is a list of policies sent by leaders at those schools:

Gettysburg College: “Gettysburg College prepares students to engage in the complex questions of our time through effective leadership and socially responsible citizenship. Committed to these institutional values, we want to assure all students who have applied or been admitted to Gettysburg that school discipline resulting from peaceful protest will not jeopardize your admissions decision in any way.”

Dickinson College: "Dickinson College supports students’ rights to make their voices heard. We were established in 1783 by a revolutionary thinker who wanted to educate citizen leaders to be active participants in a newly created democratic nation. While we respect the right of school districts to maintain policies consistent with their missions, we won’t penalize students who speak up or protest appropriately to make their views known."

Elizabethtown College: "Here’s our policy from the Student Handbook (Code of Conduct) – we encourage peaceful dialogue.

Disruptive/disorderly conduct including but not limited to:
• Infringing on the rights of other members of the College community;
• Attempting to discourage an individual’s proper participation in, or use of the student conduct system;
• Disruption, interference or obstruction of teaching, research, administrative, or disciplinary proceedings, other College processes or activities, including its public-service functions on- or off-campus, or other authorized non-College activities, when the act occurs on College premises;
• Breach of peace; or aiding abetting, or procuring another person to breach the peace (which includes not only on-campus Code of Conduct violations, but also violations of Borough noise ordinances—see Elizabethtown Borough Noise Ordinances below);
Leading or inciting others to disrupt scheduled and/or normal activities or proceedings within any campus building or area."

Messiah College: "Freedom of inquiry is certainly encouraged at Messiah College! We afford all members of the on-campus college community substantial privileges with respect to freedom of public expression. This privilege, however, is subject to reasonable restrictions of time, place and manner so that the activities do not interfere with the academic mission and daily functions of the College, or with other rights of members of the on-campus college community.

To this end, Messiah does have a policy in place regarding public expression. This policy governs all forms of public expression activity like demonstrations; public speeches; and the distribution and/or posting of written materials or other forms of communication carried out in connection with these activities. Students wishing to engage in public expression go through a request process in advance with the Vice Provost/Dean of Students.

Public expression activities are permitted in several high-traffic areas of campus (i.e., the student union, main sidewalk/courtyard areas) and at mutually agreed-upon times (between the applicant and Student Affairs). No microphones, bullhorns or other amplification devices may be used and sidewalks and building accesses may not be blocked. Any signs, placards or banners that are displayed must be respectful, may not use profanity or other defaming language, and in general must be in the spirit and meet the standards related to the treatment of others as described in the College’s student code of conduct.

As a private campus, visitors—including prospective students—do not share the same privilege as members of the on-campus college community (students and employees) to participate in public expression activities on Messiah College property."

Millersville University: "Since we’re a public university, we do allow protests on campus, as long as they don’t interfere with classes or the business of the university. Our students are free to protest, as long as they follow the Student Code of Conduct -http://www.millersville.edu/services/judicialaffairs/files/StudentCodeofConduct.pdf."