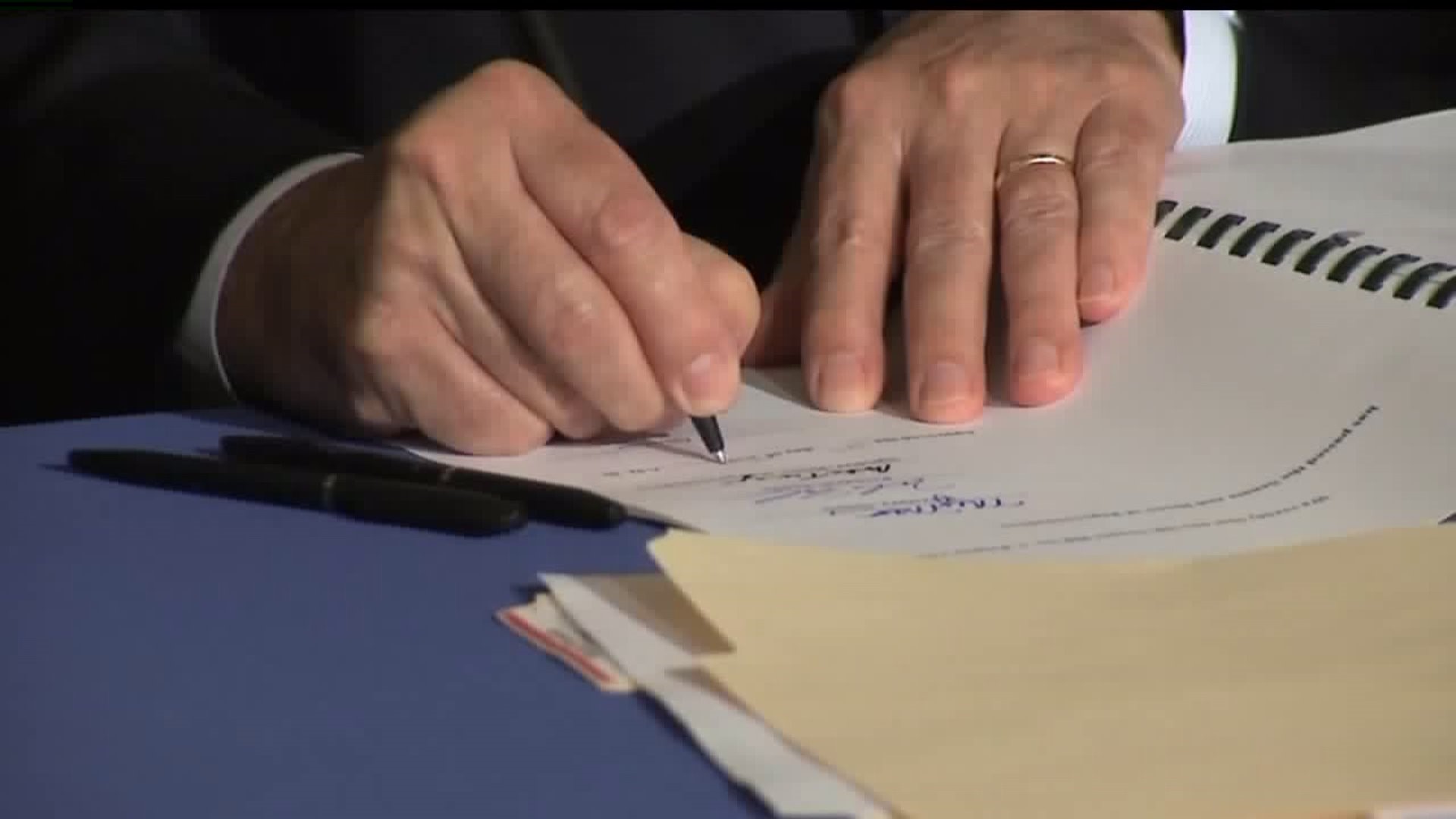 The plan promises to move the commonwealth from its current format of paying for public worker retirements through taxpayer-funded pension plans, and shifts the focus to a 401(k)-based system, similar to the private sector. The new retirement plans go into effect for new state employees beginning January 1, 2019 and teachers on July 1, 2019. Participants will get to choose from one of three options, which all include some semblance of a 401(k)-style plan.

"This is historic reform," Wolf said before signing Senate Bill 1 at the Pennsylvania Capitol rotunda Monday. "It is real and meaningful.

"Today is yet another demonstration that by working across party lines and branches of government, we can address important issues."

Wolf, a Democrat, signed the bill while flanked by House Republican Leader Dave Reed, and Senate Majority Leader and SB1 author, Jake Corman. A bipartisan group of Democrats and Republicans applauded the signing behind the trio of state leaders.

Sitting in the front row watching the signing was political activist Barry Shutt.

Shutt, a retiree, is no stranger to the Capitol. He spends many days in the building's East Wing rotunda, pushing for pension reform while sitting next to a machine which simulates the state's rising pension debt.

His "pension clock" estimates the current debt over $75 billion, and rising at more than $100 million every second. Other estimates say the commonwealth's pension debt is closer to $60 billion. Either way, according to the state's Independent Fiscal Office, Senate Bill 1 would only eliminate $1.4 billion off the debt over the next 30 years.

"Governor Wolf and proponents say it stops the bleeding," Shutt said. "It doesn't stop the bleeding, it slows it down."

Shutt has tried to propose a plan which, he says, would decrease the debt by $20 billion over the next 10 years. To do so, Pennsylvania would have to raise its personal income tax from 3.07-percent to 3.57-percent. Shutt also wants to tax people currently accepting pensions.

"Everyone is entitled to be treated fairly, but that public employees are treated that much better than rest of the world is not right," Shutt said.

The issue, he admits, is convincing a General Assembly body to get on board with tax increases. It's not likely.

Rep. Stephen Bloom (R-Cumberland), who has worked on addressing the pension crisis in the State House, believes there are other areas in state government to save money on to address the pension debt.

That said, Bloom admits, it moves the needle of pension reform in a favorable direction for the first time in years.

"It's not a perfect bill, but its a good bill," Bloom said. "When you have situation we're in with divided government in Pennsylvania, this represents serious progress."