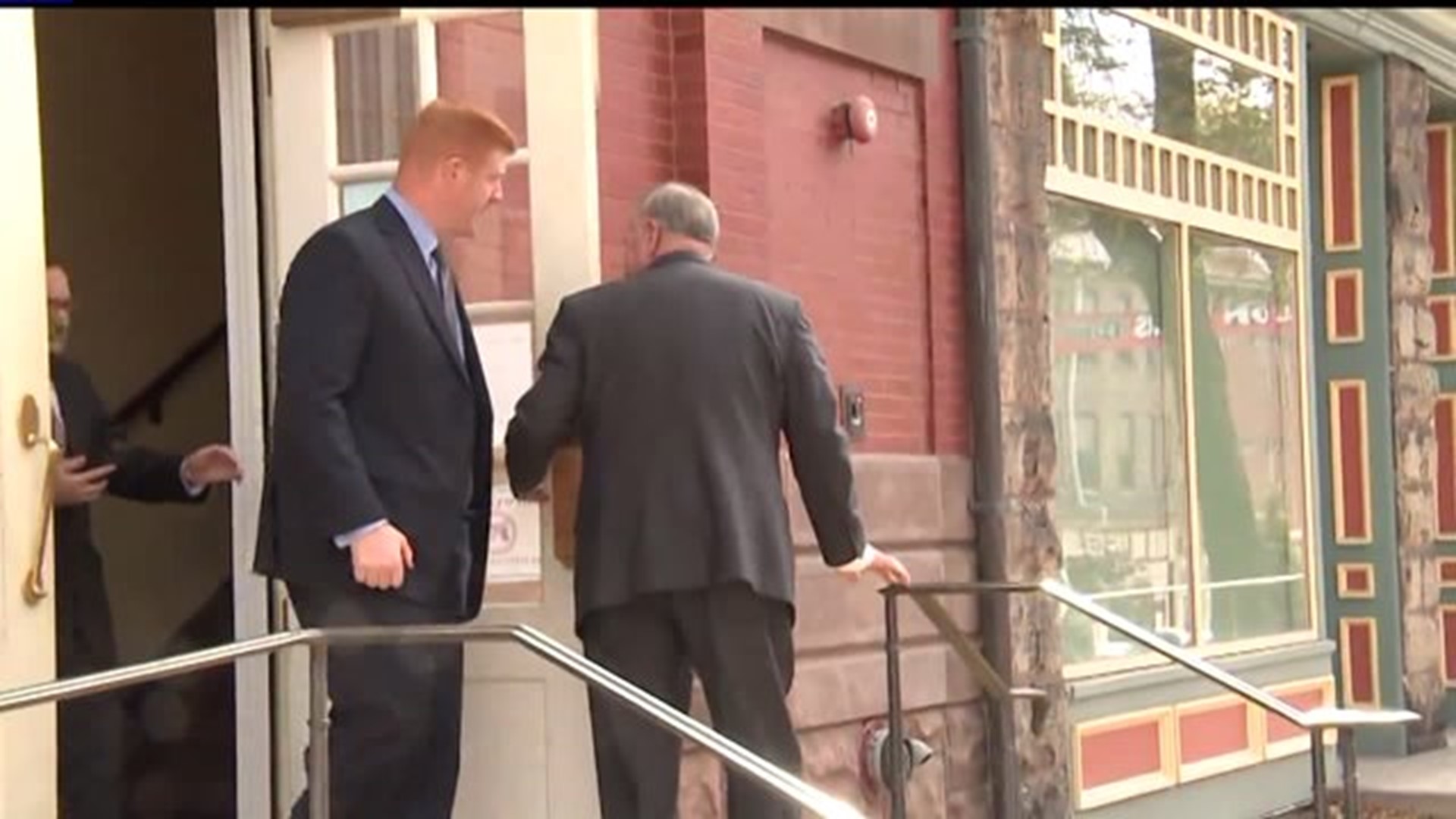 McQueary is seeking $4 million in damages from the school, accusing it of singling him out for coming forward and providing investigators with information which led to Sandusky's arrest. He claims school officials treated him unfairly after his name was outed from a grand jury presentment.

Spanier testified for most of Thursday, focusing on his relationship with Tim Curley and Gary Schultz, and claims of what he did -- and did not -- know about Jerry Sandusky's reported history of bringing children from his Second Mile youth charity into school facilities and showering with them.

Curley, Penn State's former athletic director, and Schultz, who served as Spanier's Vice President of Finance and Business, were indicted by a grand jury on perjury and failure to report charges in November 2011. Spanier was indicted on similar charges in 2012. All three are currently facing failure to report and child endangerment charges in Dauphin County.

Spanier testified that former university counsel Cynthia Baldwin told him on October 28, 2011 that Curley and Schultz were soon to be indicted.

"I believed then that there was something wrong with the presentment," Spanier testified Thursday. "It did not sound credible to me."

Spanier then began crafting a statement, with the help of university officials Bill Mahon, Lisa Power, and, to a lesser extent, Baldwin and Board of Trustees Chairman Steve Garvin, exonerating Curley and Schultz. The statement, which expresses "unconditional support" for the two administrators, and claims their charges were "groundless", is what McQueary says labels him as liar to the grand jury.

Spanier, instead, says he was trying to support two friends he worked closely with for 16 years.

"This was an unbelievable injustice, that these two guys, who are like Boy Scouts, would be charged with a crime," Spanier said of the statement. "And that's what was in my head -- This was from me."

Spanier's statement was eventually published on November 5, 2011, the day Sandusky was arrested and the grand jury presentment was released. He maintains he only skimmed the grand jury report that Saturday, and it wasn't until Sunday he was able to digest all of it.

"It was my belief that working daily with these individuals, knowing their honesty and integrity, believing that they never withheld information from me, and recollecting rather clearly the 2001 meetings and what they described, it merited my unconditional support," Spanier said.

"It was a great injustice they were being charged at all."

Spanier recounted the infamous 2001 emails between he, Curley, and Schultz, which were published in the Freeh Report in 2012. He testified Thursday to having limited recollection of any specifics from the emails.

One of the emails, written from Tim Curley to Spanier and Schultz, mentioned Curley "going to him" and "asking him to receive professional help" and telling "his organization", but avoids mentioning any names.

Spanier was asked by McQueary's attorney, Elliot Strokoff of Harrisburg, if Curley was referring to Jerry Sandusky and his Second Mile charity. He responded, "I believe so, yes," but added, "At the time I read email, I don't recall knowing what it might have been."

Regardless, Spanier's email response called Curley's approach "acceptable" and "humane". When asked why he approved that course of action without knowing what Curley was referring to, Spanier reiterated his trust for Curley when it came to matters of Penn State athletics.

Spanier also testified he had no knowledge of a 1998 incident involving Jerry Sandusky and a young boy. Spanier was copied on multiple emails outlining the initial report from a mother who told university police her son had been hugged from behind by Sandusky while they were showing together. The incident was investigated by Penn State police and the Centre County District Attorney at the time, Ray Gricar, decided not to press charges.

Jurors also heard testimony Thursday from Mike McQueary's father, John McQueary, who recounted the night of Feb. 12, 2001, when his son told him of seeing Sandusky with the young boy in a Lasch Football Building shower.

John McQueary, who at times sounded frazzled and confused by the questions from Strokoff, testified he told his son to come home as soon as he told him what he had seen.

"Coach Sandusky was in the shower with a boy, naked," McQueary remembered his son telling him over the phone. "He was behind him under the shower, doing something sexual in nature. I could hear rhythmic slapping skin noises."

Once McQueary returned home, his father and family physician Dr. Jonathan Dranov, told McQueary to tell Joe Paterno what he had seen.

McQueary told the jury he did not believe his son ever followed up with his superiors, but John did, questioning Gary Schultz at some point after the initial report.

"Gary, this is big. This is huge. What's next?" McQueary says he told Schultz.

"John, we've heard noise about this before, about the same coach. Every time we've come up empty. There is nothing to sink our teeth into," Schultz said, according to McQueary, who responded, "This time there is something to sink your teeth into. My son saw it."

"We're going to look into it," Schultz reportedly responded.

McQueary was pressed by Penn State's top lawyer, Nancy Conrad, who focused on their main defense that McQueary had a moral obligation to do more to stop Jerry Sandusky when he had the chance, and that all of his future ails relate back to that incident.

Conrad asked McQueary if he made sure to ask his son if the boy was okay before he left. He said his son assumed the child had left the Lasch building.

"And when he called you and told you what he saw, did you tell him to call university police?" Conrad continued. "No," McQueary said.

The first week of witness testimony wraps up Friday in the civil trial which is expected to last more than two weeks.