EAST LAMPETER TOWNSHIP, LANCASTER COUNTY, Pa.– East Lampeter Township police are searching for the driver who set off a chain of events that they believe ... 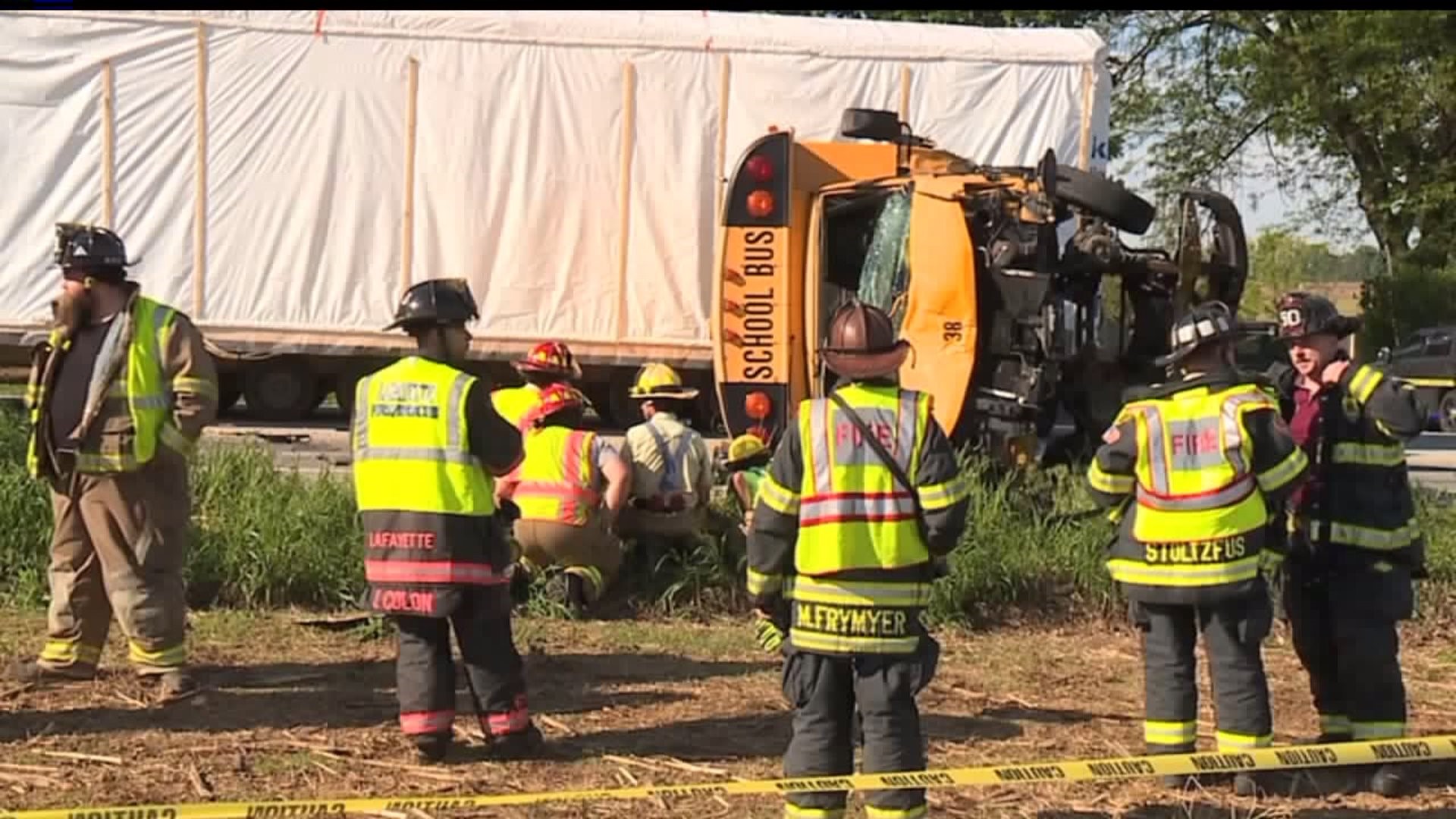 EAST LAMPETER TOWNSHIP, LANCASTER COUNTY, Pa.-- East Lampeter Township police are searching for the driver who set off a chain of events that they believe caused a school bus crash Wednesday morning.

East Lampeter Township Police believe the rollover crash began with a driver passing others on the road, and then striking an escort car leading an oversize load.

East Lampeter Township Police chief John Brown said "the lead vehicle appears to have gone into the school bus, causing the school bus to start to go sideways, and roll over, and also before that happened it struck the tractor trailer."

Emergency crews arrived on the scene, airlifting at least one student to an area hospital while 13 other students, their bus driver, and the driver of the escort car were taken to Lancaster General Hospital.

"The injuries that the students have sustained, many of them are minor, and that's very fortunate given the situation," Brown said.

All were later treated and released while two students remained in trauma condition. One flown to a children's hospital while the other waited to be transported next.

Lancaster General Hospital spokesperson John Lines said "we knew in advance that the students were coming, as well as the drivers from the scene. We were prepared, and kind of like clockwork, worked our way through each patient, caring for each, and then reuniting them with their families."

Police now searching for the driver who they said left the scene of the crash on Route 30, Wednesday morning.

"The vehicle is described as a light colored sedan, with one occupant, a newer model that has front-end damage, supposedly driven by a male driver with short hair," Brown said.

While police believe the actions of one driver set off a chain reaction collision, it's working with a Lancaster County crash team to investigate this case.

"The reconstruction is going to play a very important part of the investigation. We have basically a team of reconstructionists, as well as all the appropriate equipment to do the accident reconstruction that will hopefully put the pieces together for us," Brown said.

UPDATE (11:18 a.m.): One child from the crash is about to be airlifted to a Children's Hospital.

There were originally 3 kids in trauma, 1 was downgraded and released, 1 flown to a children's hospital, 1 waiting for transport @fox43 pic.twitter.com/2t3VuTQSlI

A Lancaster General Hospital spokesman says one child from the school bus crash is about to be airlifted to a Children's Hospital @fox43 pic.twitter.com/nRvHEaFJgS

Lines noted that there were 20 students on the bus, while 16 of them were transported to Lancaster General Hospital.

"The injuries that the students have sustained, many of them are minor, and that's very fortunate given the situation," Lines said.

"Three of the injured are trauma cases, none of the students have been discharged, at this hour' Lines added.

Hearing the news of the school bus crash surely was disturbing for the parents of the students involved.

"When you have a situation like this, we set up a special room in our dining area so that families can talk with our counselors, as well as our chaplain to get their answers, if their students are not with them right away," Lines said.

"Those moments are very important because it may take awhile for us to treat the student. That's a nerve-wracking time for any parent to have to go through," Lines added.

The incident occurred around 7:50 a.m. and is near Dutch Wonderland and the Fulton Steamboat Inn.

Route 30 is expected to be closed for several hours.

Fritzi Schreffler of PennDOT says that one child was trapped beneath the vehicle and airlifted to a hospital.

Schreffler says that this is the point of Route 30 that goes from 2 lanes down to one. A light-colored sedan was trying to pass the oversize load that was carrying a mobile home when it hit the load and the escort car before speeding off.

John Bowman, East Lampeter Police Chief, says that police are searching for the vehicle involved. It was believed to be driven by a male and should have front end damage and no license plate. At this time, officials believe the driver of this vehicle may have set off a chain reaction.

This collision may have caused the oversize load to strike the school bus, forcing it to turn over.

ATTN: Police are searching for a male driver of light-colored sedan involved in this mornings crash @fox43 https://t.co/3bkXu2lxLc

Gary Hill from Lancaster Mennonite says that the bus to Chester County is primarily for high school students coming from partner Christian schools that do not offer high school.

However, one student on the bus was attending the Locust Grove Campus for children in Pre-K through eighth grade and one was attending Lancaster Mennonite Middle School.

At this time, the extent of any injuries are unknown.

Lancaster Mennonite is in the process of contacting the parents of the families of children involved in the crash.