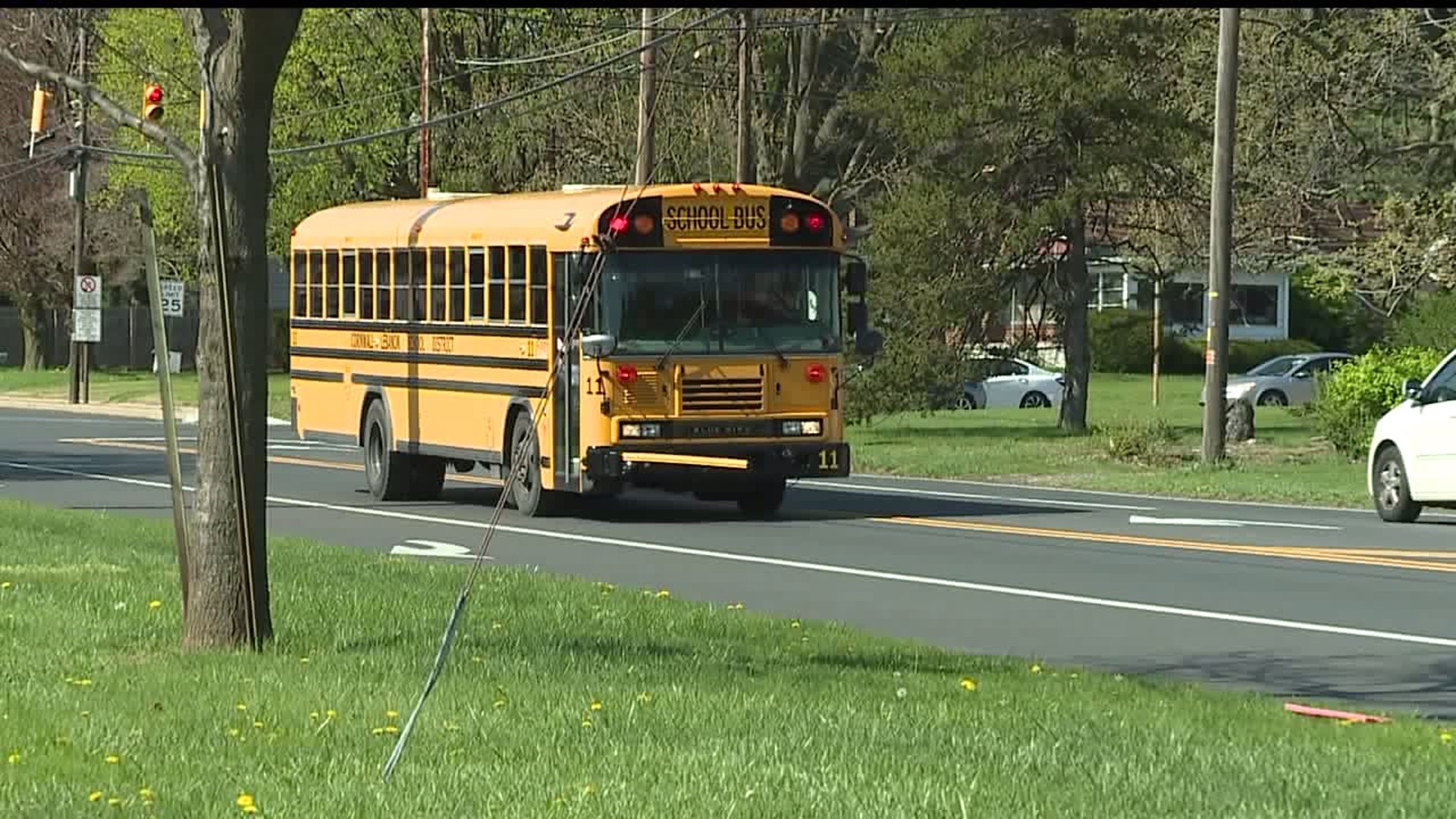 It may be against the law to drive around stopped school buses, but it hasn't stopped some people from doing so - watch this footage of a driver narrowly miss hitting a mother picking up her child.

The "red-runners" were caught on camera, breaking the law, by video surveillance cameras installed on the front of the school buses by Brightbill Transportation. People passing by school buses is a big problem in the district. Bus drivers lay on their horns when drivers decide to illegally zip by.

"The primary issue is that when the red lights are on, and the bus is stopped, is that people are passing when the stop`s sign is out and the red light is flashing," said Dr. Philip Domencic, superintendent of the Cornwall-Lebanon School District.

Fox 43 staked out and caught multiple people "running the reds" on Route 74, one of the most notorious stops in the district. You can see this driver zipping by the bus in the morning and multiple drivers speeding by after school. One driver even passes by on the side where students get off. Wendy Seegar has a 12 year old in Cedar Crest Middle School. It’s shocking to her that people don’t stop for the buses.

”You’re helpless. It’s a helpless kind of feeling because there’s nothing you can do," said Penny Hartman.

Hartman drives bus 11 for the district with Brightbill Transportation. It’s protocol to honk the horn when drivers illegally pass by which she does both times that Fox 43 captures. Then, she must try to take down the culprit’s license plate and the make and color of the vehicle. Bus drivers then have 48 hours to submit a report to local police.

”You just can’t believe they’re doing it because what if it was their child that was crossing," said Hartman. "The second thing is my heart breaks because like I said, you get to know these kids, and you feel like as soon as they step off their property, they’re yours. You’re responsible for them. You have to watch that child, and there’s nothing you can do."

You see Hartman holding students back until the roadway is clear. Then, she lets the kids off. Brightbill Transportation’s safety director Dave Schlotter says it’s concerning because drivers are taking these risks all across Central Pennsylvania.

"We've actually had drivers had to grab a kid by the hood of his jacket and pull him back before a car went past at the door," said Schlotter.

Drivers, like Hartman, deal with enough distractions as is.

So what do you do when you pull up behind a school bus? The driver is either dropping off or picking up students. They put on the amber lights, and they put the stop sign out, there's also some red lights on there. You are to stop 10 feet from the back of the bus, and then you wait until those lights turn off and the sign retracts, and then you can proceed around the school bus.

"The only time a driver shouldn't have to stop for a school bus is if there's some sort of a barrier between the roadway that the bus is on and the roadway they are on," said Schlotter.

Even emergency vehicles must stop until a bus driver gives them the go ahead. If you drive around a bus that has their red lights on and stop sign out, you're breaking the law - it's a $250.00 fine, 5 points on your driving record, a 60 day drivers license suspension, and according to Hartman, the ultimate price, taking a child`s life.

"You just get to know these children like they're one of your own. Just to see them being hurt, and the feeling of helplessness," she said.

Annually, it's reported over 1,000 drivers do not obey the school bus stopping law. Safety transportation experts say that number could be much higher as it's hard for police to catch and apprehend the red runners.